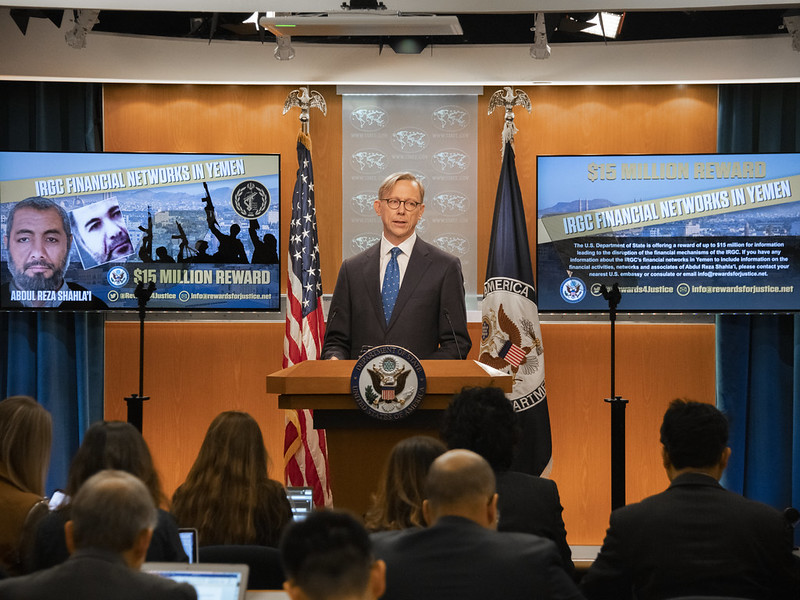 More than :
The Special Representative for , Brian Hook expressed concerns on the mass killing of . At least 1000 are reported killed, he suggested. https://t.co/oR11eheO33 time code: Min 21 onwards.

Below is a partial transcript of Ambassador Hook’s remarks:

“Good morning.  I have three announcements today on Iran, but I will first start by addressing the atrocities the Iranian regime has committed against its own people.  On November 16th, protests were spreading throughout the country.  In Mahshahr, a city in southwest Iran, a number of Iranian demonstrators blocked a road.  The State Department has received videos of what happened next.  Without warning, the IRGC opened fire on the protesters, killing several people.  Many of the protesters fled to nearby marshlands to escape.  The IRGC tracked them down and surrounded them with machine guns mounted on trucks.  They then sprayed the protesters with bullets.  Between the rounds of machine-gun fire, the screams of the victims can be heard.  In this one incident alone, the regime murdered as many as a hundred Iranians and possibly more.  When it was over, the regime loaded the bodies into trucks.  We do not yet know where these bodies went, but we are learning more and more about how the Iranian regime treats its own people.”

“We have seen reports of many hundreds more killed in and around Tehran.  And as the truth is trickling out of Iran, it appears the regime could have murdered over a thousand Iranian citizens since the protests began.  We cannot be certain because the regime blocks information.  Among those murdered are at least a dozen children, including 13 and 14-year-olds.  We have received reports from family members of victims who tried to recover the bodies.  The authorities demanded that the families first pay the cost of the bullets they used.  In many cases, authorities would not hand over the bodies until their family promised not to hold public funerals.”

“Many thousands of Iranians have been wounded, and at least 7,000 protesters have been detained in Iran’s prisons.  Many of these protesters have been sent to two prisons, the Great Tehran Penitentiary and Qarchak Prison.  Today Secretary Pompeo has determined these entities meet the criteria for gross human rights violations set out in CAATSA, and the State Department is submitting to Congress the names of these entities.”

The Great Tehran Penitentiary is known for its inhumane living conditions, which consist of unsanitary and crowded corridors, rodent infestations, insufficient food, water, and medical care.  We have seen reports that protesters have been subject to abuse and mistreatment during interrogations, arbitrary beatings, and rape.  Qarchak Prison is Iran’s largest women’s prison, and also holds many members of religious minority communities.  It too is known for unbearable conditions, including regular assaults and inappropriate behavior of prison guards towards women, chronic lack of water, unsanitary living spaces, and an environment that enables rape and murder.

“The United States calls for the immediate release of all protesters detained in prison, as well as all the political prisoners currently held by the regime.”

“Now is the time for all nations to stand with the Iranian people, diplomatically isolate the regime, and sanction those officials who are responsible for murdering innocent Iranians.

“These protests have made clear what Secretary Pompeo and I have been saying for quite some time:  The Iranian people want the regime to focus on investing in people, not proxies.  They are sick of the regime squandering its wealth on proxy warfare, which leads only to economic pressure and diplomatic isolation.  Unfortunately, this is exactly what the Iranian regime continues to do, even while the Iranian people were filling the streets, calling for an end to We call on the international community to join us in holding Iran accountable for its acts of terror both against the nations of the world and against the Iranian people.”

“I want to close on one observation about the protests.  The Iranian regime keeps losing major constituencies in its revolutionary base: first the students, then the middle class and merchants, then the working class, and even many of the clergy who criticize the regime.  Now, in the latest protests, nine seminaries were burned.  The only support left for the regime is with a handful of clerics whom the Iranian people despise for having imposed 40 years of brutality on them.  The regime now maintains its grip on power through brute force.”

Ambassador Hook was also asked about the role of the People’s Mojahedin Organization of Iran (PMOI, Mujahedin-e Khalq or the MEK) and the National Council of Resistance of Iran (NCRI) in the Iran protests:

QUESTION:  Brian, thank you so much for doing this.  Could you give us your assessment of who really is responsible for organizing the protests in a hundred different cities?  How organized is the uprising regionally?  And also, what is your assessment of the exiled NCRI/MEK organization with regard to their influence over the protests or their connectivity to demonstrators in various cities?

MR HOOK:  The regime, I think, since in the Green Revolution of ’09, decided that its best tactic it can use to prevent people from organizing is to sheer off the bravest of the protesters, arrest them, and kill them.  And so it is – look, they even jail and murder environmentalists when they organize, like the Persian Wildlife Heritage Foundation and the Canadian Iranian who was arrested.  The Iranians claim he committed suicide; it’s much more likely that they killed him in jail.  This is somebody who is trying to promote wildlife protection.  And so whether it’s the environment or whether it’s labor unrest or unrest about corruption and squandering their wealth on foreign adventures, the regime follows the same tactic of preventing any organized opposition.

QUESTION:  So there isn’t a monolithic organization.  Is that what you’re saying?  It’s an uprising that’s sort of wider and chaotic and across society?

MR HOOK:  Well, I don’t have any comment on whether there’s a specific group that is doing this, but the fact that you saw protests across so many different cities – and I would also just point out none of these protests are against the United States.

QUESTION:  So the reason I bring up NCRI —

MR HOOK:  Let’s go to the next question.

MR HOOK:  I don’t have any comments on specific groups.