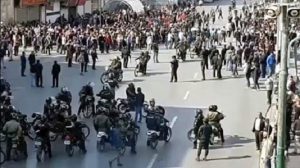 The latest incident at Iran’s Natanz nuclear facility is also the latest symbol of the Iranian regime’s thinly veiled vulnerability. Tehran has made a concerted effort to mask that vulnerability beneath provocative gestures on the political stage and in surrounding waterways, as well as persistent support for militant allies like Yemen’s Houthi rebels and Lebanese Hezbollah. But the resulting image of strength has been successively fractured by a number of setbacks to the regime’s objectives, of which the attack on Natanz is only the latest example.

Iran’s inability to protect its own assets is not just a reminder of its vulnerability to outside attacks. It also signifies the erosive effects of political discord and slow economic collapse. Both of these trends have fueled an ascendant Resistance movement that now clearly encompasses all of Iranian society and has been responsible for at least three recent uprisings, and for those incidents that point to the likelihood of more to come.

Last month, as Iranian expatriates were celebrating their New Year holiday, Nowruz, the Iranian Resistance leader Maryam Rajavi observed that large-scale protests in Sistan and Baluchistan Province were signs that “the fire of the uprisings is rising from under the ashes of the coronavirus.” By that time, the country had gone more than a year without protests that matched the scale of those that began in the final days of 2017, but Tehran’s failure or refusal to manage the public health crisis left the general public with even more reasons to challenge the country’s leadership and the theocratic system it upholds.

The Iranian people are sick of suffering the effects of Tehran’s weakness and desperation and they are prepared to take actions leading to the overthrow and replacement of the existing regime. This goal was all but transparent during the uprising that began in December 2017, which featured unusually provocative slogans like “death to the dictator.”
In November 2019, the uprising encompassed nearly 200 cities and towns. It also resulted in even more intense repression by regime authorities. Whereas the first uprising gradually led to several dozen deaths from gunshots and torture, in 2019 the Islamic Revolutionary Guard Corps opened fire on crowds almost immediately and killed approximately 1,500 people over the course of about two weeks. Later, Amnesty International issued a report detailing the systematic torture that protesters and activists were subjected to for months afterward.

This political violence is fairly typical of the Iranian regime’s behavior when its vulnerability is exposed. It is a particularly vivid and deadly example of that behavior, but it falls within the same general category as the bluster and ultimatums that come to define the regime’s interactions with its Western adversaries over the past few years, including those who are defending the Iranian position regarding the 2015 nuclear deal, or Joint Comprehensive Plan of Action.

Tehran would have its negotiating partners believe that its nuclear program has flourished in the wake of US withdrawal from that agreement. The regime’s leading officials insist that the economy has successfully weathered the re-imposition and expansion of US sanctions, putting Tehran in a position of strength amidst renewed efforts to restore the status quo. As such, they have been demanding that the US removes all of those sanctions before the Iranian regime takes even one step toward reversing its myriad violations of the JCPOA’s restrictions on nuclear enrichments, stockpiling, and development.

Unfortunately, there are signs that some Western policymakers have been taken in by such narratives and were prepared to push for acquiescence to the mullahs’ demands. The Natanz incident undermined this narrative while also reminding about the illusory nature of the broader image of strength that Tehran is working to present.

Now, the international community must take care not to let Iran’s propaganda get the upper hand again. This requires fully appreciating the effects of prior incidents, as well as the recurring failures of Iran’s response. The relevant incidents are manifold and diverse. They include breaches of Iran’s security, but also instances of political fragmentation within the ruling system, and recurring domestic challenges to the regime’s hold on power. They include a growing catalog of social and economic crises that Tehran has utterly failed to address in any way other than by courting still greater resentment among the general population.

As long as the international community isn’t taken in by Tehran’s efforts to portray a false image of strength, the regime will not be able to compensate for its own vulnerability.

The crackdown on the November 2019 uprising did not prevent Iranians from coming back out into the streets in massive numbers again before the onset of the coronavirus pandemic. And the coronavirus was only a temporary setback to the process of pro-democratic revolt. When that process resumes in full, no one should dare deny the signs of Tehran’s vulnerability or, as the case may be, its imminent overthrow.