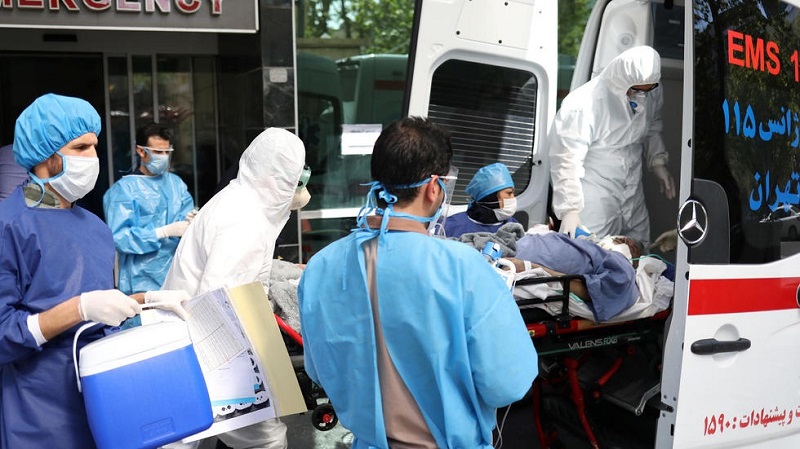 “Corruption and renting system will export foreign loans from Iran,” said Farshad Momeni, one of the Iranian regime’s economists.

The Iranian regime, along with its cover-up and inaction, is pushing the narrative outside Iran that international sanctions are the reason for the high mortality rate of the coronavirus outbreak in Iran. Therefore, the regime has requested a $5 billion loan from the International Monetary Fund (IMF).

The Iranian Resistance for a long time has warned that due to the regime’s institutionalized corruption and its need to money for funding terrorism abroad and domestic oppression, giving money to the regime will add to the Iranian people’s miseries. The regime has rejected humanitarian aid from particularly the United States, and the mullahs’ president Hassan Rouhani has been bragging about the emptiness of “over 20% of hospital beds.” Thus, helping the regime will only increase chaos in Iran and the Middle East.  The Iranian Resistance has repeatedly said that the hedge funds and huge financial institutions that belong to the regime’s supreme leader Ali Khamenei or the Revolutionary Guards (IRGC) have the financial and logistical ability to help Iranian people amid the coronavirus outbreak.   Now the regime’s economists and officials, fearing a possible social turmoil, warn the regime of the consequences of not acting and its institutionalized corruption.

In this regard, in an interview with the state-run ILNA news agency, Farshad Momeni, while reacting to the regime’s demand of a $5 billion loan from the IMF, warned that due to the vast corrupting within the regime and lack of a clear economic plan in the country, demanding a loan from a foreign party will be “A tool to expand and deepen corruption, incapability and unjustifiable economic backwardness and inequality.”

“While Iran had enormous oil revenues within the last few years, but this huge revenue, due to the [regime’s] corruption and lacking a program have not only increased Iran’s manufacturing potential and its global system ranking, but rather have pushed the country to an unprecedented fall to be among countries with a horrible expansion of corruption, the cheapest living conditions, and severe environmental crises,” Momeni continued, highlighting these issues indicate that the regime “doesn’t have the ability to use currency resources.”

Momeni further warned that due to the regime’s vast and institutionalized corruption, “Soon, the foreign loan will be usurped and exported by some individuals, so the loan will be rather a foreign rent.”

“Some $300 billion of the country’s strategic foreign exchange resources in the last thirty years, under the pretext of the management of currency market fluctuations, which is actually the sale of currency by the government to cover its current expenses, have vanished into thin air; resulting in various other crises in Iran,” Momeni added.

Another regime economist, Hatam Ghaderi, warned the regime to “stop spending money in Syria and Iraq and give the money back to people. The supreme leader, and his institutions’ budgets should be clarified and Astan-e Quds Razavi’s money should be given to people.”

From the first days of the coronavirus outbreak, the Iranian Resistance has emphasized that the assets of huge financial foundations like the Execution of Imam Khomeini’s Order (EIKO), Astan Quds Razavi and other huge foundations possessed by the supreme leader should be made available to the public to fight the coronavirus. Now the regime’s experts and former officials are echoing this demand to somehow control the restive Iranian society.

The state-run Jomhuri – e Eslami daily, in its editorial by mullah Massih Mohajer, who has been the editor-in-chief of this newspaper since 1981, focused on this issue. “These financial powers include the Execution of Imam Khomeini’s Order, Mostazafan Foundation of Islamic Revolution and Astan Quds Razavi. The vast financial and facilities these centers possess, if used to help the damaged society sectors by the coronavirus, will resolve these sectors’ problems rapidly and completely. These assets and facilities belong to people and should be exactly used in such situations to resolve people’s problems,” he wrote.

While possessing huge amount of money and logistics, Khamenei and Rouhani have forced the people to go back to work amid the coronavirus outbreak which has so far, according to the People’s Mojahedin Organization of Iran (PMOI/MEK), claimed lives of 28,200 people.

As Mrs. Maryam Rajavi, the president-elect of the National Council of Resistance of Iran (NCRI), said: “For Khamenei and Rouhani, the lives and well-being of the people are worthless. They only want to protect their regime from the threat of uprising. The criminal decision to send people to work is a crime against humanity and will cause countless number of victims.”

For Khamenei and Rouhani, the lives and well-being of the people are worthless. They only want to protect their regime from the threat of uprising. The criminal decision to send people to work is a crime against humanity and will cause countless number of victims #COVID19 #Iran pic.twitter.com/BQ7ANf7jkq

“The IRGC and the regime’s major financial institutions, that have plundered the Iranian people’s wealth, can pay for the expenses of workers, wage earners and the unemployed to protect them during the lockdown to protect them from contracting the coronavirus,” she added.

The IRGC and the regime’s major financial institutions, that have plundered the Iranian people’s wealth, can pay for the expenses of workers, wage earners and the unemployed to protect them during the lockdown to protect them from contracting the #COVID19 #Iran pic.twitter.com/6RwpkH8q6r