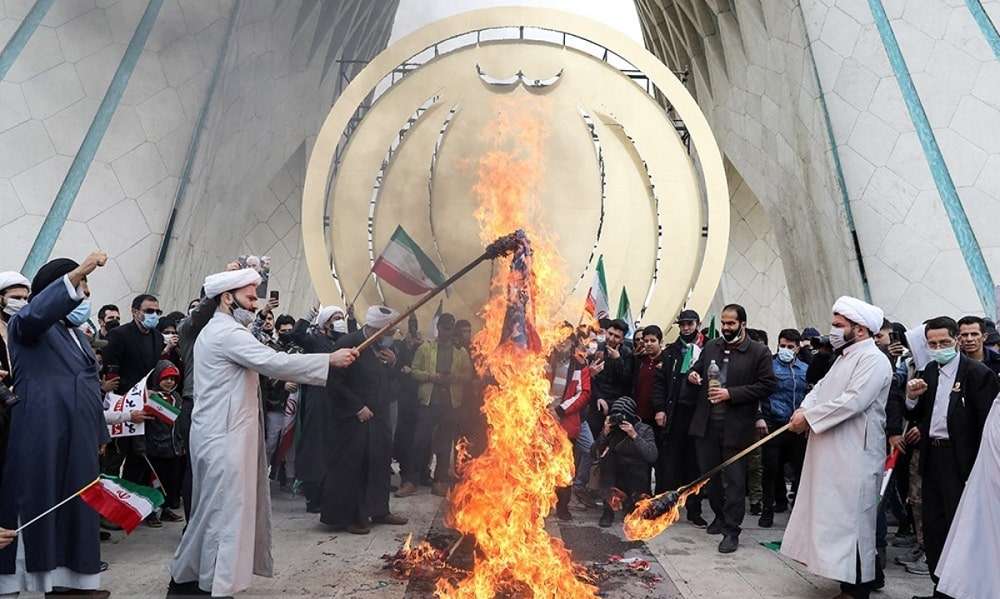 Throughout history, all dictators have tried to legitimize their rule by amassing crowds, whether by intimidation or inducements. But Iran’s ruling theocracy and its ridiculous “anniversary carnival” outdid actions taken by dictators like Hitler, Mussolini, and Franco.

Lacking any semblance of legitimacy inside Iran, the Iranian regime literally does everything to imply to its foreign audience that it enjoys popular support.

February 11 marked the anniversary of Iran’s 1979 anti-monarchical revolution. A revolution, hijacked by Ruhollah Khomeini and his ilk. As the Shah’s true heir, Khomeini, and his affiliated network of clerics, usurped power in the absence of actual opposition members, whom Shah had imprisoned or executed.

In his latest speech, Ali Khamenei, the Iranian regime’s supreme leader, called for holding the regime’s anniversary carnival “more glorious than ever.” Yet, despite the mullahs’ heavy mobilization, they miserably failed to even put out a staged-managed show.

The regime had mobilized all its Basij paramilitary forces to parade in streets riding on motorcycles while holding pictures of Khamenei, the eliminated terror mastermind, Qassem Soleimani, and Ruhollah Khomeini, the regime’s founder. This hodgepodge of motorcycles and cars driving in streets, causing gridlock, and annoying ordinary Iranians was meant to cover up the meager participation in the government-organized event.

Reports by the Iranian opposition network from over 200 cities across Iran indicate scant participation in the regimes’ anniversary. In Tehran suggest that a few dozen of the mullahs’ supporters were at Imam Hossein Square, where the regime used to rally its forces before starting the march. Aerial photos from Tehran’s Azadi square and other main gathering points in different cities Showed a sparse crowd.

According to reports from Iran on social media, the regime forced many government employees to participate in its ridiculous show, and people were transported from rural villages to cities.

Streets were filled with various stations offering anything from free vaccination to food, garments. There were also the so-called “cultural” booths. The regime claimed it had reached a sufficient level of vaccination days before its anniversary to justify holding gatherings as the country goes through the sixth wave of coronavirus. Khamenei’s ban on globally recognized vaccines and the government’s systematic cover-up over the Covid-19 crisis has caused its death toll to surpass half a million.

. “The people’s low participation [in the regime’s carnival] is due to their dissatisfaction,” Faizullah Arab Sorkhi, one of the regime’s so-called “experts,” told the state-run Dideban website on February 11.

Iran’s state TV and other state-run media lost no opportunity to air short films about Khomeini, trying to whitewash his criminal record. Meanwhile, Iranians took to social media to express their hatred toward the founder of the ruling theocracy by creating funny short videos about his arrival and speeches.

In this regard, Khomeini’s grandson Hassan Khomeini acknowledged on February 10, “Today Imam Khomeini is the target of the enemies attack. He is the system’s identity, and by targeting him, [people] are targeting the system’s legitimacy.”

On Thursday, videos from Iran showed people shouting anti-regime slogans from their windows at night. “Death to Khamenei” “Damn with Khomeini,” chants were broadcast by loudspeakers in the bazaar in Mashhad on Thursday and in several other cities, as the Iranian opposition disrupted the PA system.

"Death to Khamenei; hail to Rajavi," "Neither crown nor turban, mullahs must go," and "Raisi is the executioner of #1988Massacre," heard. pic.twitter.com/Gw7D1wP5gA

The main speaker of the regime’s anniversary of usurping power in Tehran was Ebrahim Raisi, who praised the “epic presence of people,” while footage from state TV showed very few people in the venue. Raisi spoke of economic independence amid increasing warnings by regime officials and state media about the country’s deep financial crisis and people’s possible reaction.

The anniversary coincided with Friday prayers, and many regime officials acknowledged the domestic and international crises engulfing the regime and how people are getting connected to the opposition.

“We observe some economic problems. The global arrogance and the enemy have imposed a mediatic war on us. We are facing many challenges. The reason we cannot resolve these challenges is our distance with the [regime’s],” Mohammad Baqer Qalibaf, the Parliament Speaker, said in Mashhad, acknowledging the regime’s domestic crises. “The enemy has focused on weakening the system’s foundations and targeting people’s trust in the system. They intend to alienate people from the [regime], Imam Khomeini, and officials by highlighting the economic crisis,” he added, according to Iran’s state TV.

“We Should notice that we are at war. The enemy is lurking and plotting daily. One of the enemy’s missions is to spread despair in the public and hatred [toward the regime]. People should pay attention and prevent the enemy from misusing their righteous economic and social demands and protests,” Hassan Alidadi, Khamenei’s representative in Kerman, said while referring to daily social protests during an interview with Iran’s state TV, February 11, 2022.

Iran’s economic crunch, caused by the regime’s corruption, mismanagement, and ineptitude, has increased the society’s explosiveness, and significant uprisings are on the horizon. In addition, the “Resistance Units,” a network affiliated with the Mujahedin-e Khalq organization, continue their activities across the country, cracking the regime’s wall of oppression and increasing public courage.

The regime’s failed anniversary carnival conveyed the message of the mullahs’ vulnerability and lack of popular support.