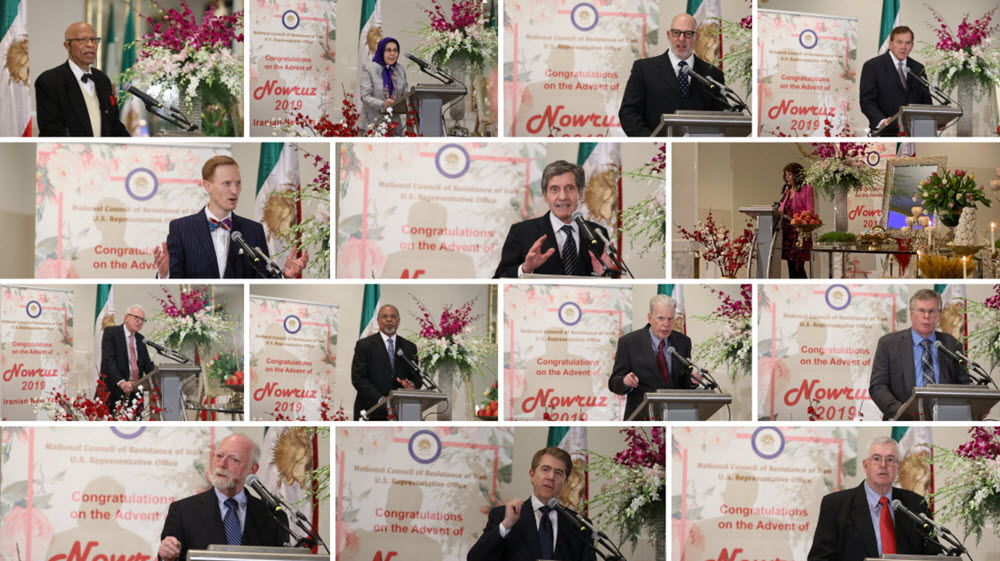 The US Representative Office of the National Council of Resistance of Iran (NCRI) celebrated the Iranian New Year (Nowruz) with a dinner reception on March 22, which was attended by several former senior US officials and features many prominent speakers. The attendees called for a firm US policy to counter the Iranian Regime.

Dr Sofey Saidi, a member of the NCRI Foreign Affairs Committee, opened the event with a speech about how this year would hopefully bring freedom and democracy to Iran, highlighting that the ongoing anti-regime uprising makes the overthrow of the mullahs “inevitable”. While the NCRI’s Washington representative Soona Samsami, advised that the Iranian New Year celebrations were intrinsically linked to the “triumph of happiness over suffering, spring over winter, and freedom over tyranny”, thus there is no better time to think about a new dawning in Iran.

Tom Ridge, former US Secretary of Homeland Security, elaborated on the protests and advised that over 10,000 people had been arrested in 160 cities for peacefully protesting against the Regime.

He said: “The people in their own way are saying that the situation is unacceptable and they want change…. The alternative has been broadly and eloquently and persistently expressed through the NCRI and [its president, Maryam] Rajavi and her 10-point plan.”

Ambassador Robert Joseph, former undersecretary of State for Arms Control and International Security went further to describe the resistance forces in Iran and declared that the Iranian people would “throw off this yoke of oppression” and that the NCRI pointed the way to freedom. While Ambassador Lincoln Bloomfield Jr, the former US Assistant Secretary of State for Political-Military Affairs commended all those working towards freedom in Iran, saying that the US stands for “courage”, “truth”, and “justice” for the Iranian people.

Kenneth Blackwell, former US Ambassador to the United Nations Human Rights Commission, said: “There is a new burst and a new energy and a new yearning for freedom in the country and I am so delighted to be a part of that push [for] a free and democratic Iran.”

Former US Ambassador to Bahrain and Deputy State Department Spokesperson Adam Ereli explained that the Regime had lost its legitimacy and that their days were “numbered”. While Colonel Wes Martin, a former Senior Anti-terrorism and Force Protection Officer for all Coalition forces in Iraq, said that there was evil in the Regime and the NCRI were “heroes” for standing up against it.

All in all, it seems that the US should alter its policy on Iran in order to get tougher on the mullahs and support the Iranian Resistance.

A number of prominent speakers addressed the gathering of young and old at the NCRI-US Nowruz dinner receprtion, against the backdrop of an elaborate Haft Seen, a traditional symbol of the ancient Persian Nowruz festivities. #Iran #Nowruz https://t.co/J91DRFWGCn pic.twitter.com/Vt7zmZI5pp

Several former senior US officials called for a firm policy to counter the theocratic regime. Their calls were echoed by Iranian adherents of the NCRI, who declared their support for change in Iran. #Iran #Nowruz https://t.co/J91DRFWGCn pic.twitter.com/VV9Dhy4lTn

The U.S. Representative Office of the National Council of Resistance of Iran (NCRI-US) celebrated the Iranian New Year, Nowruz, with a dinner reception at the historic Mayflower Hotel in Washington, DC on March 22nd. #Iran #NowRuz pic.twitter.com/GtFEh2kL5P

Hope for a Democratic Future, Praise for Resistance Units in Iran, Calls for a Firm US Policy at NCRI-US’s Nowruz Reception#Iran #Nowruz https://t.co/J91DRFWGCn pic.twitter.com/PzbAdIRRYb