On June 29, an international delegation visited Ashraf 3 in Albania to support the democratic alternative for Iran, represented by the National Council of Resistance of Iran (NCRI). International personalities participated in a conference entitled "The mullahs' regime, a source of war and instability in the region; the Iranian Resistance, messenger of peace and freedom".

Participants, parliamentarians and political, legal and civil society figures from Europe and Australia insisted on the need to adopt a firm policy against the belligerence and terrorism of the mullahs and to hold the regime accountable for its human rights’ violations and its crimes against the Iranian people.
Personalities from Australia, Switzerland, Germany, Portugal, France, Great Britain and the Netherlands joined Maryam Rajavi, president-elect of the NCRI, and expressed their solidarity with the uprising and the resistance of the Iranian people for regime change. They supported the NCRI president-elect's 10-point plan for a future Iran. 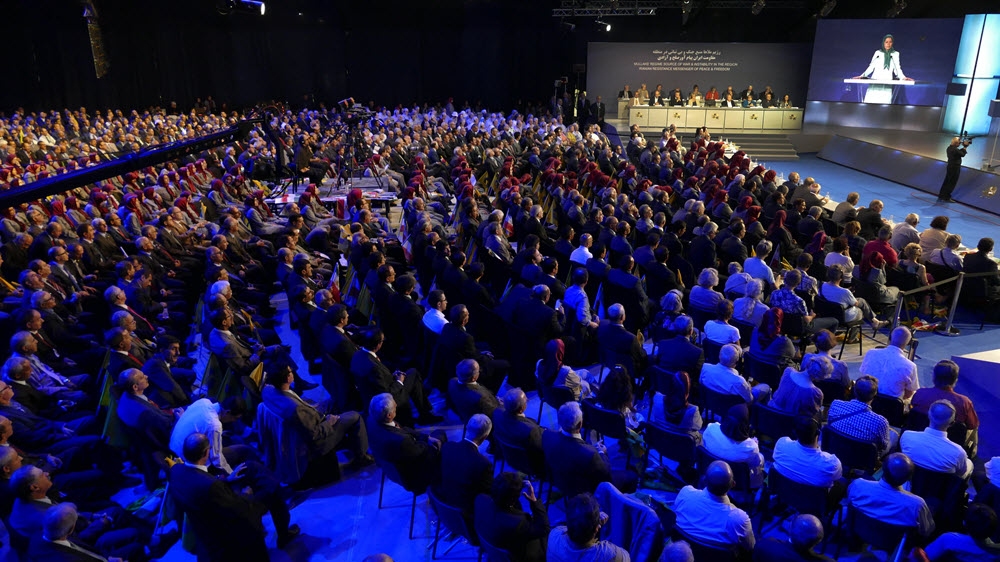 In her speech, Maryam Rajavi affirmed:

“Your presence at the home of the Iranian Resistance, more than anything else, sends a message of solidarity to the people of Iran who are fed up with the ruling theocracy, and are poised to topple it.

Our nation is not identified by a moribund, medieval regime but by its arisen people determined to achieve freedom, democracy and equality. As such, Ashraf is at the heart of Iran, an Iran that has arisen, the cradle of uprisings and revolution and the home to Resistance Units and Rebellious Cities.”

In her analysis of the situation, the President-elect of the Iranian Resistance said:

"In recent weeks, the Iranian crisis entered a critical phase.

In May, the mullahs’ regime attacked four commercial ships at the port of Fujairah.

Five days later, the mullahs’ mercenaries fired a rocket which landed near the U.S. Embassy in Baghdad.

Subsequently, the regime’s surrogates fired multiple missiles at airports in Saudi Arabia, one after the other.

On June 12 and 13, the Prime Minister of Japan was in Tehran to mediate, carrying with him a message from the U.S. President. But Khamenei rejected the offer to the point of virtually insulting Mr. Abe. Even worse, on the same day, the regime attacked a Japanese tanker in the Gulf of Oman near the Iranian coast.

Indeed, a guest who had come to mediate could not have been subjected to a more degrading treatment as Shinzo Abe was because the mullahs did not even wait for his departure from Tehran before attacking the ship.

And exactly one week later, on June 20, in a provocative act, the mullahs shot down an unmanned U.S. drone flying over the Persian Gulf in international airspace.

In an official statement, the Islamic Revolutionary Guard Corps (IRGC) took responsibility for the attack, boasting that it had inflicted $200 million worth of damages on 'the enemy.'

On June 25, the regime’s president Hassan Rouhani lauded the IRGC for targeting the 'enemy,' saying that he would kiss the hands of the military and the IRGC personnel who carried out the attack.

Of course, after 40 years, the people of Iran are well aware that the enemy is not on the other side of distant oceans; the ruling mullahs are the enemy, who stand face-to-face against the Iranian people.

For their part, an assortment of regime apologists, lobbyists, operatives and agents, who for years had accused the Iranian Resistance and their freedom-loving and humanitarian supporters of being warmongers, claimed that those advocating for human rights and freedom in Iran seek to lure the U.S. to wage war. What a disgraceful lie!

Now, have these attacks made it clear to proponents of appeasement that the Iranian regime is the very source of conflict in the Middle East? Or this time, do they want to give the mullahs a peace prize?

Perhaps it would be better to ask those who described opposition to human rights abuses in Iran or the Resistance’s revelations against the mullahs’ clandestine nuclear sites as setting the stage for war: do they feel ashamed or are they still looking for a way to exonerate the regime?

Indeed, defending the religious fascism under the banner of opposing war is truly disgraceful and, of course, does not beguile anyone."

“The clerical regime is inherently destructive and has ruined the Iranian economy, bringing it to an impasse. Balanced economic relations that have a future and serve both the interest of the Iranian people and the world are only possible in an Iran that has been freed from the yoke of the mullahs,” Mrs. Rajavi added.

“Therefore, to those who want to give the mullahs more chances, we say:

You should not repeat the enormous damages already inflicted on the people of Iran and the region by making concessions to the mullahs again;

You cannot feign concern for war in order to assist a religious fascism that has perpetrated or been involved in the dirtiest wars in the region.

Anyone who partners with the regime to circumvent sanctions is complicit in preserving an inhumane dictatorship.

Imposing sanctions on the theocracy aids the people of Iran in their struggle against this dictatorship.

Blacklisting the corrupt and vicious core of the regime, the Office of the Supreme Leader Khamenei, which took place after a three-decade delay, has been welcomed by the Iranian public. The blacklisting must be extended to the regime’s president, Hassan Rouhani.

The UN Security Council must declare that the clerical regime in Iran is a threat to global peace and security.

The dossier of human rights abuses and massacre of political prisoners in Iran must be referred to the UN Security Council and international tribunals.

We call on all countries to join the international front against the religious fascism.

The International community, and specifically the European Union, must recognize that resistance is the Iranian people’s right to establish the sovereignty of the people of Iran.”