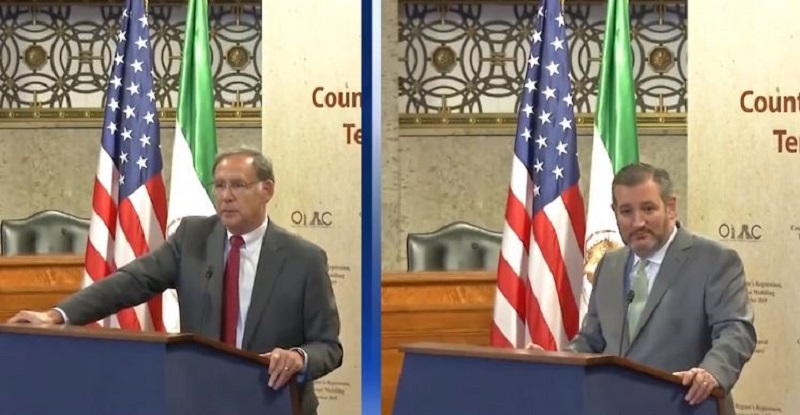 United States senators Ted Cruz and John Boozman this week showed their solidarity and support for the Iranian people's struggle to achieve freedom and democracy in Iran.

"Ayatollah Khamenei & the mullahs enforce brutal repression on the ppl. I will say to the men & women of Iran, America is with you in your struggle against cruel, oppressing, torturing, murderous tyrants" @SenTedCruz

“Two things are happening. One, the regime is afraid of its people and this is the word of encouragement that I want to give the men and women here: Dictatorships can seem very, very strong until suddenly they're not. The Ayatollah and the mullahs are terrified of the people. They're terrified of the truth. And as they lose the billions that have been funding their repressive regime, they are more and more vulnerable to the people demanding freedom. But secondly, in the process, we've seen them lashing out. We've seen them carry out acts of war attacking their neighbors, Saudi Arabia, attacking the oil facilities there and doing major damage to their production capability. Unequivocal act of war carried out by Iran, lashing out as the regime is becoming desperate to hold on to power… the Ayatollah and the mullahs are much, much weaker than many believe at the time.”

“I welcome you being here to talk about the importance of how to move forward and continue the pressure on the regime in Iran," he said.

He added, the “MEK’s presence at the center of the NCRI – the opposition’s parliament-in-exile, makes the NCRI a viable and formidable alternative to the mullah’s tyranny. The very existence of this alternative, and its platform of a free, democratic, secular, and non-nuclear Iran, represents an existential threat to the clerical dictatorship that controls the people of Iran through fear and brutality.” The People's Mojahedin Organization of Iran (PMOI), otherwise known as the (Mujahedin-e-Khalq MEK), is Iran's largest and most organized opposition group.