London, May 2005 – Fifteen members of Parliament from both Houses and all major political parties told a packed meeting at the House of Commons that the British government should remove Iran’s main opposition group from the list of terrorist organizations. Parliamentarians and a prominent Iraqi political personality addressed the gathering of over 100 members of the diplomatic corps, human rights groups, and the press, hosted by the British Committee for Iran Freedom.
The Parliamentarians denounced a recent report by U.S.-based Human Rights Watch alleging that the PMOI abused the rights of its “dissident’ members.
Lord Corbett of Castle Vale, chairman of the parliamentary committee, denounced “the undemocratic nature of the forthcoming presidential election in Iran, characterized by mass disqualification of candidates and complete apathy of Iranians”. 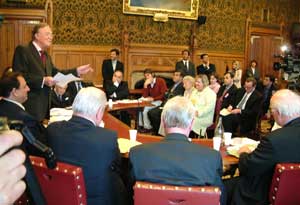 Andrew Mackinlay, MP and member of the Commons Foreign Affairs Committee, added that “the elections in Iran are not only illegitimate; they are a farce”.
Speaker after speaker also supported the proposed “third option” by Maryam Rajavi, President-elect of the National Council of Resistance of Iran, as the best chance for the emergence of a democratic and secular government in Iran. Rajavi rejected both appeasement of the Iranian regime and a foreign military intervention as means of fomenting change in Iran. Her third option calls for international support for the Iranian people and their resistance to bring about democratic change in Iran.
The MPs and Peers issued a joint statement at the end of the meeting rejecting HRW report on alleged human rights abuses by the PMOI as “unsubstantiated”. They raised serious questions about the report’s methodology and political undertones and called on HRW to retract it.

Previous articleNational Council of Resistance of Iran screens video of public hanging in Iran
Next articleBaroness Harris of Richmond expresses her support for the Iranian Resistance: