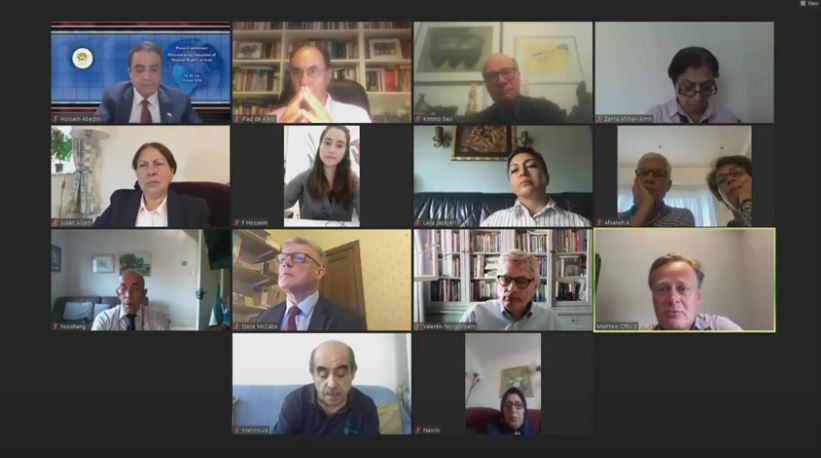 On Wednesday, the National Council of Resistance of Iran held another in a series of virtual online conferences to promote alternative voices on matters of Iran policy. The event featured several European lawmakers including British MPs Matthew Offord and Steve McCabe, and former European Parliament Vice President Alejo Vidal Quadras.

The NCRI had already planned a larger “Trans-Atlantic Summit on Iran Policy” for Friday, but Wednesday’s event was organized to address the specific topics of political imprisonment and politically-motivated execution, following the hanging of Navid Afkari, an Iranian national champion wrestler who had become the focus of far-reaching international appeals.

Afkari was originally arrested for having taken part in anti-regime demonstrations in the city of Shiraz in August 2018. He was subsequently accused of killing a security guard during the unrest and was tortured into providing a false confession.

#Iran: European powers should expel the regime’s ambassadors and intelligence agents from their countries shut down the mullahs’ embassies, and end their trade and relations with this brutal regime.#NoImpunity4Mullahs #StopExecutionsInIran https://t.co/srl4eFr9it

There was a distinct similarity between forcing Navid into making a false confession and the hundreds of other hit-pieces that have been produced over the years to counter objective narratives about unfair trials and the systematic abuse of political detainees. This only prompted further international outcry about Afkari’s evident experiences of false imprisonment and torture. Yet Tehran was forced to execute Navid. Because the mullahs’ regime has been ruling by systematic oppression. In addition, the nationwide uprising in 2018 and 2019 have not only rattled the regime’s foundations, but they have demoralized security forces. Navid’s execution was meant to boost the morale of these forces.

Wednesday’s conference served to reinforce the prior condemnations of Afkari’s execution, but it also strongly emphasized the regime’s systematic human rights violations and oppressing any voice of opposition, either in present circumstances or throughout the four-decade history of the mullahs’ regime. As an example, an activist named Mostafa Salehi was similarly executed in August for taking part in 2018, though his case received considerably less international attention.

NCRI President-elect, Mrs. Maryam Rajavi noted at the time that Salehi was very nearly accompanied to the gallows by eight other condemned protesters. Their survival, at least up to this point, was attributed primarily to a domestic social media campaign in Iran, which saw millions of people utilizing a Persian hashtag that translates to “Do Not Execute.” However, the impact of that campaign cannot be expected to last indefinitely, and the lingering danger of a much higher death toll was a key focus of Wednesday’s conference.

“A number of political prisoners are currently on death row and in danger of being executed,” said Tahar Boumedra, the former head of the Human Rights Office in the United Nations Assistance Mission for Iraq. “If no serious measure is taken, there will be a massive loss of life.”

Tahar Boumedra of @jvmifoundation: The UN must stop recommending action. The matter has to be referred to the UN Security Council to take firm action. #StopExecutionsInIran #FreePoliticalPrisoners #NoImpunity4Mullahshttps://t.co/uWrdCzqvhz

His remarks were directed at the entire international community and particularly at leading Western powers, thus underscoring widespread concern that European Union did not take sufficiently assertive actions to halt Afkari’s case, and presently cannot be trusted to keep attention focused on related issues now that he has been put to death.

Boumedra expressed the belief that Iran should be subjected to even greater international isolation on the basis of its abysmal human rights record. “The current legal and judicial system in Iran must be abandoned if the Iranian regime wants to join the UN,” he said.

Steve McCabe offered an even more specific endorsement of diplomatic isolation. After urging Western governments and the United Nations to demand access to Iranian prisons and to initiate an investigation of the regime’s massacre of political prisoners in 1988, he declared, “It is time to consider more serious consequences. This includes expelling Iranian diplomats, even the ambassadors, and closing embassies and ending diplomatic relations.”

Similar recommendations have been offered by other supporters of the Iranian Resistance and itself in recent years, especially in the wake of an attempted terrorist attack on an international “Free Iran” gathering that NCRI had organized near Paris in the summer of 2018. After two Iranian operatives were arrested while attempting to access that rally with explosives in their possession, it was revealed that they had been directed by a high-ranking diplomat at Iran’s embassy in Vienna.

The fallout from the terror plot included allegations from some Western authorities that the vast majority of Iranian consular employees are actually operatives in the regime’s secret service. As NCRI has previously exposed, the Iranian regime’s entire diplomatic infrastructure is a thinly veiled terrorist network. This message was reinforced in Wednesday’s conference, which at times emphasized the continuity of Iran’s political violence at home and abroad.

Most speakers attributed part of the upward trend in that violence to a longstanding Western commitment to conciliatory dealings with Tehran. “The regime has been emboldened to continue repressive measures against their people as well as their terrorist activities,” said Matthew Offord. He went on to say that the mullahs should bring a halt to all such activities “if Iran wants to have any kind of engagement with the West or other countries in the Middle East.”

.@Offord4Hendon: Iran regime’s resorting to torture & execution is a clear sign of its desperation. It is a great regret that #NavidAfkari has been executed. I would like to see the UK to reimpose sanctions on Iran. #StopExecutionsInIranhttps://t.co/WEZ3l6d3dv

Offord specifically called for the United Kingdom and its allies to re-impose sanctions that were suspended under the 2015 Iran nuclear deal. But he also hinted at the opportunity for a broader strategy of isolating and exerting pressure on the Iranian regime. Kimmo Sasi, a former member of the Finnish parliament, stated that the ultimate goal of this pressure should not be to compel reform from the existing regime, but rather to facilitate regime change at the hands of the Iranian people.

“The leaders of Iran must know that human rights violations have consequences,” Sasi said. “There must be cooperation between the international community and the Iranian opposition.”

The opportunities for such cooperation have arguably grown much more prevalent in recent years. While Navid Afkari’s execution reflects a broader crackdown on dissent in Iran, that crackdown, in turn, highlights the regime’s anxiety over an anti-government protest movement that has resisted all of Tehran’s efforts to control it.

.@KimmoSasi: The UK must stand against Iran. We need punitive actions. And of course, it makes no sense that arms are sold to Iran. The leaders of Iran must know that human rights violations have consequences #NoImpunity4Mullahs https://t.co/NS3wlHwKjZ

“The brutal and secret execution of Navid Afkari gives us a sense of what is happening in Iran,” Steve McCabe observed. “There must be worries for dozens of political prisoners who might be wondering if a similar fate is awaiting them. But prisoners in different prisons of Iran are writing letters and protesting the execution of Navid. So, if the goal of the regime is to cow the population by executing Navid, it doesn’t seem to be working as they expected.”