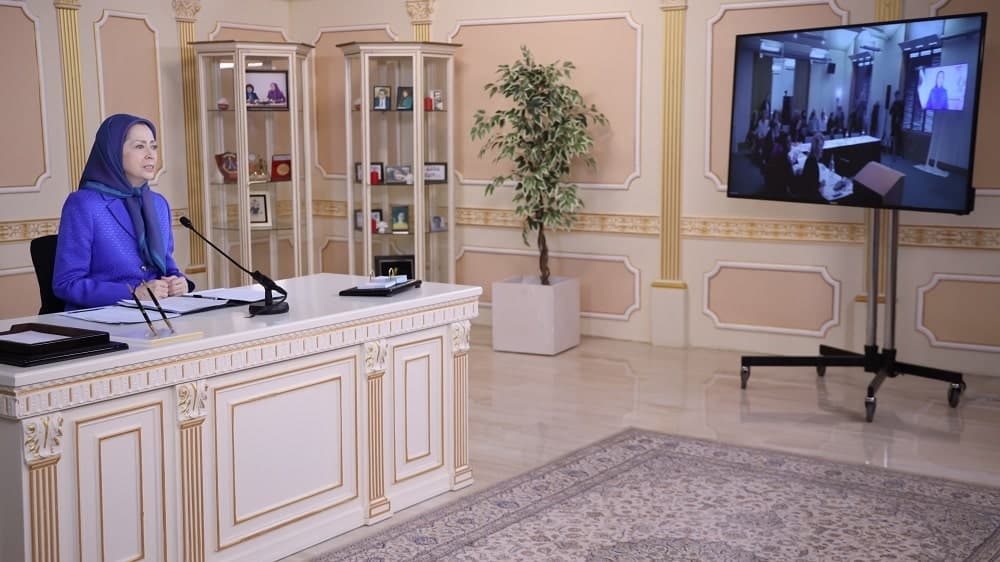 On Thursday, November 24, prominent lawmakers of the United Kingdom’s House of Lords and House of Commons joined a cross-party conference in support of the nationwide Iran uprising. Mrs. Maryam Rajavi, the president-elect of the National Council of Resistance of Iran (NCRI), was the keynote speaker of this event.

The organizer of this event, the British Committee for Iran Freedom, issued a press release about today’s virtual meeting of cross-party MPs and Peers with Mrs. Rajavi.  The press release underlines that British MPs and Peers “said the culture of impunity is emboldening the Iranian authorities to continue to oppress the people and women in Iran, which has led to the killing of over 600 protesters, including 60 children, and the arrest of more than 30,000.”

“They also stressed that the UK should engage in talks and closer cooperation with those who strive for a free, democratic, and secular republic in Iran, in particular the NCRI and Mrs. Rajavi, because they have a social network and resistance units inside Iran and a 10-point platform for the future of the country, which offers a viable democratic alternative to the current regime based on and reflecting the Iranian people’s democratic aspirations,” the press release adds.

“These are vitally important issues. Women’s rights are human rights, and I’m encouraged by the cross-party attendance and the very strong and distinguished lineup of speakers today, which reflects the strong, widespread support for the brave women and girls of Iran in both Houses of the UK parliament,” Mrs. Anna Firth, British MP from the Conservative Party said in this regard in her opening remarks.

.@Anna_Firth: I welcome the fact that the UK government announced the second round of human rights sanctions against 24 Iranian officials last Monday. But I would like to see the immediate removal of Iran from the UNCSW. #IranRevoIution https://t.co/qy29qFHjIu

Thursday’s conference was held simultaneously with the United Nations Human Rights Council’s special session on Iran’s worsening human rights situation. Referring to today’s session, Mrs. Rajavi underlined that the “formation of a fact-finding mission regarding the brutal crackdown on the protests and holding to account those responsible for these crimes are necessary.”

While referring to the Iranian people’s unwavering determination to topple the regime, Mrs. Rajavi highlighted the leading of Iran’s leading opposition group, Mujahedin-e Khalq (PMOI/MEK) and its Resistance Units, as well as the authorities expressing their fear of this movement.

“The commander of the State Security Force and some Friday prayer leaders have repeatedly emphasized the role of PMOI members as leaders of the uprising,” she said.

“A democratic revolution is in the making in Iran, and religious fascism is on its last leg,” Mrs. Rajavi said, adding, “The Iranian people and protesters urge both houses of the British Parliament to lead a bold initiative to encourage the UK government to take these two necessary steps.”

Mrs. Rajavi’s call to support the Iranian people’s uprising and their organized Resistance was endorsed by the British lawmakers.

Rt Hon Theresa Villiers, British MP, Former UK Secretary of State for Environment and Northern Ireland, said: “I am here to support those brave women who have been speaking out. Those who’ve been protesting for 70 days now following the appalling death of Mahsa Amini and their courage really is just incredible.”

“I think it is important that we see a dossier of human rights abuses committed by the mullahs in Iran referred to the UN Security Council as part of increased diplomatic pressure both from our government here and hopefully also working with its international partners to make clear how intolerable we believe the situation in Iran is,” she added.

MP Jim Shannon from the Democratic Unionist Party was the next speaker of this event. “I believe our interventions should be on the basis of helping the people and the women of Iran to secure justice and bring about accountability, which is so important. So, I want to associate myself with these demands of Madam Rajavi. I want to ask our government to be proactive at the UN and other international forums to have the UN investigate the atrocities and the killings of protesters in Iran and prosecute regimes leaders and others responsible at an international tribunal,” he said.

Lord David Alton, a long-time supporter of the Iranian people and the Iranian Resistance, also addressed the conference, underlining that “Iran’s future is with the NCRI, with Madame Rajavi, and with Iran’s women and youth who are protesting on the streets. Not with the criminal regime that kills them to stay in power.”

“I, therefore, urge our government to stand with Madame Rajavi and the brave people of Iran so that their revolution is victorious like we promised and are doing in Ukraine.”

“The Iranian people and the women, in particular, are suffering more than anyone else. This is a dreadful situation. We must do more. We must do more in whatever way we can to remove this horrendous regime. So, I praise Madam Rajavi for all her work and for the organization which brought us together today,” Lord Turnberg was the next speaker who joined his colleagues in supporting the Iranian opposition and the democratic revolution.

Lord Bellingham was the next speaker to underline his utter support of the revolution in the making in Iran. “My message is very simple: we’re 100% behind you. I think your great country has reached a turning point, and I think the turning points are incredibly important. But only if the world and your friends react accordingly and see this as a historical, as a great opportunity, to really make sure that this regime does start to fall and crumble and we have a democracy in its place.”

Lord Polak, another distinguished member of the House of Lords, urged the UK government to proscribe the Revolutionary Guards (IRGC) for its role in exporting terrorism and oppressing Iranians. “It is time we finally prescribed the IRGC in this country. The IRGC is the parent body of Hezbollah. We prescribed Hezbollah. I will continue to call for the IRGC designation, but the key reason we’re here today is to talk about the brave women of Iran.”

Ms. Anthea McIntyre, former MEP and former vice-president of the Conservative Party, was next to address the conference. She underlined the leading role of the MEK in the nationwide uprising, which has continued despite the regime’s oppressive measures.

“We cannot be silent in the light of these gross violations of the most basic human rights. As Iranians are holding their ground in the endeavor to establish a democratic Republic, there are growing signs that the protests have some organization, as the state media officials keep repeating. The Iranian opposition People’s Mujahedin Organization of Iran and their Resistance Units are playing an active role. The Iranian women have played a key role in the Resistance in the past four decades, and Mariam Rajavi has always been an amazingly staunch advocate of freedom and gender equality in Iran.”

MP Bob Blackman, the co-chair of the British Parliamentary Group for Iran Freedom, also addressed the attendees. “As the Iranian people chant on the streets ‘Death to Khamenei,’ ‘Death to the oppressor, whether it’s the Shah or the leader,’ the reality is we must recognize what’s going on in Iran, that is a revolution of the people. We must work to establish that as literally those very brave individuals, be they men, women, or children, standing up against oppression, risking their lives on the streets. We need to make sure that their resistance is not crushed by the IRGC and the so-called morality police or any other aspects of the authoritarian regime.”

“As long as there is no international commitment to secure justice for the victims, the regime and authorities in Iran will continue to oppress the women and people and violently silence any form of dissent, as evident by the last 43 years. Our government and international partners must therefore recognize the right of the Iranian people and women to defend themselves and their families and children against the regime,” Baroness Margaret Eaton joined her peers in supporting the Iranian democratic revolution and opposition.

Thursday’s conference featured numerous messages of solidarity by prominent British lawmakers. MP Rachael Maskell, shadow Minister (Digital, Culture, Media, and sport), also voiced her support for the current uprising in Iran. “As somebody who’s a labour MP and a cooperative MP as well, I stand with you today and say that I will do what I can in this place to show that solidarity and support and long for that freedom.”

Lord Singh, a member of the Human Rights Joint Committee addressed the conference next, underlining the responsibility to end “the culture of impunity that sees perpetrators promoted rather than held accountable. We have a responsibility to work with those who are working for a secular and democratic Iran, in which all citizens including women have equal rights to freedom of belief and expression.”

Mrs. Rajavi welcomed the endeavors and support of all participants of Thursday’s conference, underlining how meaningful and important these supports are for the Iranian people in their quest for achieving a free and democratic country.