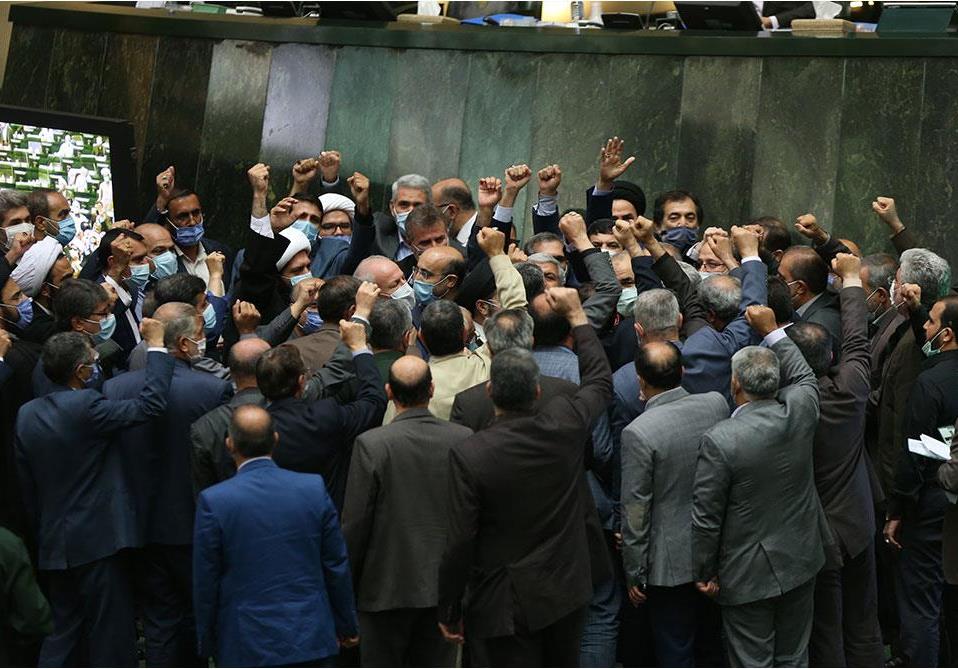 People in various cities in Iran took to the streets after the sudden increase in bread prices. It seems that Iran’s economic crisis is entering the phase of food scarcity, frightening the regime officials of people’s reaction and a looming uprising.

The regime’s supreme leader Ali Khamenei chose Ebrahim Raisi as president in a bid to consolidate his regime. Since the sham presidential election met a nationwide boycott, and as Khamenei was aware of Raisi’s notoriety as a mass murderer, the desperate supreme leader tried to sell people a bill of goods about Raisi and his government.

Khamenei, state media, and regime officials stretched the truth about Raisi and his government, calling him “the savior” of the people and the country’s economy. When Raisi threw dust in people’s eyes and made a great deal of fanfare about “economic revitalization,” “eradicating poverty,” or “building millions of houses,” Khamenei cheered his madcap sidekick.

The situation has reached a point where state media and regime officials, such as Friday prayer leaders who are considered Khamenei’s mouthpieces, criticize Raisi and his government and express fear of a volatile society.

“People are righteously concerned about their future. The government’s procedures regarding the prices of flour and pasta stirred anxiety in society,” Mohammad Baqer Ghalibaf, the parliament’s speaker and Raisi’s staunch supporter, said on May 8, as quoted by the state-run Khabaronline website.

“Contrary to public belief that the parliament and government wouldn’t have problems, it seems that the conflict between the two powers has gradually emerged. The plan to impeach the ministers of labor, industry, and economy along with the president is being pursued by MPs,” the state-run Eghtesadnews wrote on May 6.

“I encourage Raisi to stop his trips to different provinces for just one week and take care of people’s problems,” Yasser Jebraili, an MP close to Raisi, said on May 7, as quoted by the state-run Eghtesad news.

“Mr. Raisi’s government is not allowed to repeat the same mistakes of its predecessor. The government’s plan should be strategic and futuristic. People cannot tolerate the current situation,”

Kazem Fattah Damavandi, the Friday prayer leader of Damavand, near Tehran, was quoted as saying by the state-run Mehr News Agency on May 5.

“The government should take serious measures to address skyrocketing prices and inflation. This situation is unacceptable, and we expect more from this government,” Mehr News quoted Ali Hossainzadeh, Khamenei’s representative in the city of Lamerd, Fars province, on May 5.

“The so-called revolutionary government shouldn’t even speak about increasing the prices of flour and pasta, let alone doing it. It wouldn’t work to blame the previous government after eight months of having a so-called unified government!” the state-run Jomhuri-e Eslami daily wrote on May 8.

“Mr. Raisi! It has become clear that you cannot resolve problems. So, bravely resign and let experts take care,” the paper added.

“They made such a fuss that one thought they would resolve all problems before taking the government. The inflation will fall, there will be plenty of food, buildings will begin to be rapidly built, and all Iranians will have decent jobs. But none of these happened,” the state-run Arman-e Meil daily wrote on April 30.

Iran suffers from an unprecedented economic crunch, and according to state-run Jahan-e Sanat daily on May 8, “there is no clear prospect of financial improvement,” and the regime’s desperate efforts to cover up realities “would increase the gap between people and the government, which is dangerous.”

The country’s inflation rate hovers above 50%, and all economic indicators point to a plummeting economy. In other words, the regime sits on a tinderbox. The rising prices of essential goods like bread, meat, and rice seriously affect people, many of whom have not been paid for months.

The regime cannot continue its anti-west rhetoric and bragging about “economic resilience” when more people shift below the poverty line and cannot earn a meager living. It seems that the bleak economic prospect is tempering the state-run media to carry on their decades-long efforts to whitewash the regime and its devastating policies.

“When people cannot provide for their livelihood, which is bread, the possibility of social anger isn’t unclear. Even the French Revolution began when people couldn’t make a living,” Jahan-e Sanat daily warned Raisi’s government on May 8.

The regime has deprived Iranians of liberty for 42 years. The mullahs’ have oppressed people’s protests and stifled their righteous demands to have a decent life and profit from their countries’ many resources. But to deprive people of basic goods such as bread is another story and a dangerous hand that mullahs are playing. The last person who ignored people’s bread demand was Marie-Antoinette, the bride of France’s King Louis XVI. When told people did not have a bread to eat, she said, “ Qu’ils management de la brioche”—“Let them eat cake.” Her fate is history, and it seems that history is repeating itself in Iran.

Previous article
Can Iran Replace Russia in the Global Gas Market?
Next article
Iran News in Brief – May 10, 2022