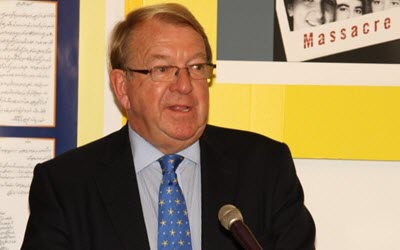 The European Iraqi Freedom Association (EIFA) strongly condemns Iraq’s membership of the UN Human Rights Council. This will seriously harm the cause of human rights in the world today as Iraq is practically under the control of the theocratic dictatorship ruling Iran and according to the reports of the United Nations and international human rights organizations, its judiciary is influenced by political factions and collective and arbitrary executions are carried out on a daily basis. On the international stage, Iraq continually supports the crimes of the Iranian regime.

According to the IRNA state-run news agency, Abbas Araghchi, the Iranian regime’s Deputy Minister of Foreign Affairs, in a meeting with Iraq’s Foreign Affairs Minister, Ibrahim Jafari, on the sidelines of the Human Rights Council, “praised Iraq’s positions in opposing anti-Iranian resolutions in the General Assembly and the Council.” In return, Ibrahim Jafari said: “The government and people of Iran are victims of terrorism, including the Mojahedin (PMOI/MEK). …. Iraq continues to oppose political moves against Iran in the field of human rights. ” (IRNA, March 1, 2017).

Jafari accuses the main Iranian opposition PMOI of terrorism, while this movement has itself been the largest victim of state terrorism in Iran and Iraq. The Iraqi government at the behest of Tehran, in three bloody attacks on defenceless Iranian dissidents in Camp Ashraf and four deadly attacks on Camp Liberty, killed a large number of PMOI members.

Iraq prevented the transfer of over $550 million worth of Ashraf residents’ property and assets and tens of millions of dollars from Camp Liberty and despite promises from the US and the UN, did not allow the sale of even a single dollar’s worth of property, all of which has been looted and stolen by the Iraqi regime.

The US and UN, who were responsible for the safety and security of Ashraf and Liberty residents, must convince Iraq to return the property of the residents or its equivalent value to them so that they can cover their heavy and crippling living costs in Albania.

War and insecurity in the region began with the opening of Iraq’s doors to the mullahs after the US invasion of Iraq, and culminated with offering Iraq to Iran’s rulers on a silver platter. Today the United States can restore peace and tranquillity to the region only by taking Iraq back from the clutches of the Iranian tyrants and returning it to the people of Iraq.