The issue of Iran and Iranian main opposition, the People’s Mojahedin Organization of Iran (PMOI), was debated in a seminar at the European Parliament in Brussels on Wednesday, September 21. The meeting was organized by Friends of a Free Iran, and it was chaired by Mr Alejo Vidal-Quadras, the first vice president of the Parliament.
After a long debate and exchanges of views a declaration was formulated which is as follows:

Considering the thorough investigation, including a trip to Ashraf in Iraq, by Friends of a Free Iran, a European Parliament inter-parliamentary group, and its report and that of Iran Policy Committee, a Washington based Think Tank, on the people’s Mojahedin Organization of Iran (PMOI);

Considering the concerns raised by several Non-Governmental Organisations such as France Liberte and dozens of political dignitaries, human rights advocates, and pre-eminent jurists, including Rt. Hon. the Lord Slynn of Hadley, former judge at the European Court of Justice and a former UK Law Lord;

Considering that the letter dated 27 May 2005, by the United States’ 89th  Military Police Brigade Commander Colonel David Philips, who was stationed at  PMOI’s  camp Ashraf for one year, not only rejected all allegations against PMOI raised by HRW,  but gave an entirely different account of the PMOI;

Considering the joint statement by nearly 500 former members of the PMOI, currently residing in Europe or North America, which unequivocally refuted "No Exit" policy as alleged by HRW and was a declaration of support for the PMOI; 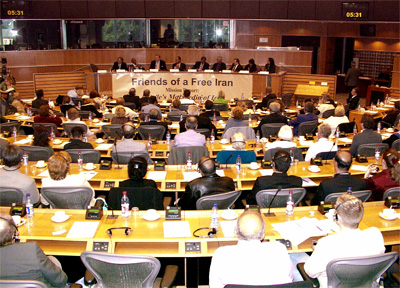 1. HRW report contained serious flaws, both in methodology and substance. We are convinced that all cases of rights violations alleged to have been perpetrated by the PMOI were completely unfounded.
2. The reliance on 12 hours of telephone interviews with 12 selected individuals, notoriously known for having ties with Iran’s Ministry of Intelligence and Security, to make such serious allegations and draw such erroneous conclusions is wholly unacceptable and raises serious concern about the real intentions of the author of the report.
3. Without question, HRW has clearly violated the most fundamental principles that are crucial for preparing a fair and impartial investigation. We therefore urge HRW to retract the report altogether.
4. While acknowledging the growing support for the PMOI in the US and Europe and for the call to remove the organization from terrorist lists, HRW 19 May 2005 press release recommends against it. This is the other side of the coin of advocating appeasement vis-à-vis the clerical regime. Thus, we find it necessary to express our views and make our recommendations.

Recent developments in Iran leave little doubt that the policy of appeasement has failed miserably and time has come to end it.  As far as the Iranian people and the international community are concerned, continuing this policy would be a recipe for disaster.

Iran’s 18 years of denial and deception regarding its nuclear programme, its continued violation of NPT obligations make it crystal clear that Tehran is intent on acquiring nuclear weapons. Remarks by Iranian regime president in the United Nations General Assembly further confirmed that Iran has no intention of respecting international demands.

1.         The EU should abandon the current policy of "engagement" with the Iranian regime, as it has failed to deliver its declared objective of encouraging reform in Iran.
2.         In response to the Iranian regime’s refusal to adhere to agreements reached with the international community concerning the suspension of its nuclear programmes, the EU should immediately take the necessary steps to refer the Iranian regime’s nuclear file to the UN Security Council for further action. Further weakness or any delay in referring Iran to the UN Security Council would cause serious and possibly irreversible consequences.
3.         The EU should stand with the Iranian people in their struggle for freedom and democracy.
4.         The PMOI should be removed from all terror lists. The terrorist designation of Iran’s main opposition has seriously impeded the Iranian people’s efforts to establish democracy in Iran. As such, EU countries should lift all restrictions on the activities of the Iranian opposition and initiate dialogue with the NCRI and PMOI.