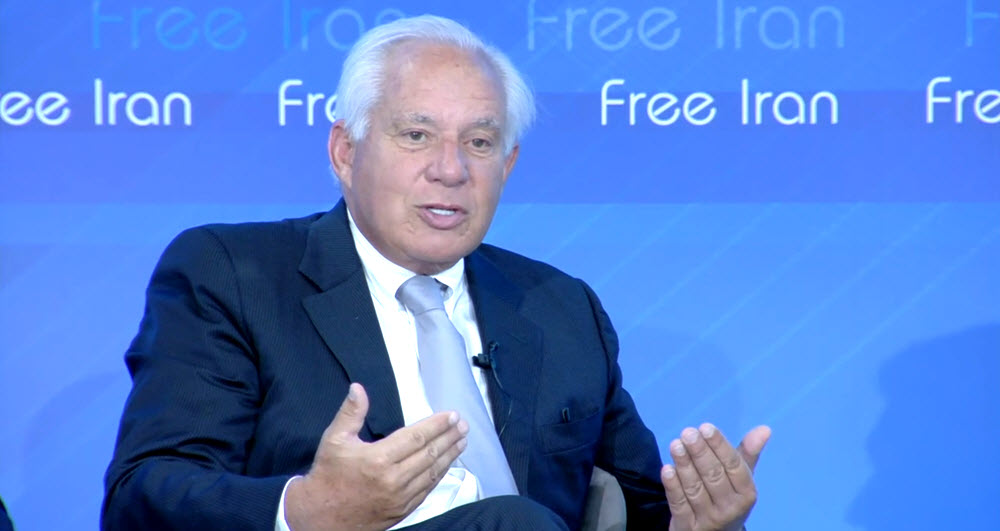 On July 1, 2018, the European authorities thwarted a bombing plot against the Iranian opposition rally in France. All four terrorists, including Iranian diplomat Assadollah Assadi, were apprehended and later received heavy prison sentences.

On Tuesday, a court in Belgium heard the appeal cases of Assadi’s minions, Amir Saadouni, Nasimeh Naami, and Mehrdad Arefani. Despite being arrested while possessing explosives and other spying equipment, all three terrorists have appealed to the court.

In an exclusive interview with Robert Torricelli, a former U.S. Senator, and one of the plaintiffs in Assadi’s case, we asked his expert opinion regarding the Western countries’ weak approach toward Tehran’s rampant terrorism.

Q: Nine months ago, Asadollah Assadi, the Iranian regime diplomat was convicted for a terror plot against the “Free Iran” gathering in 2018 in Paris. In your opinion, have European leaders taken any significant steps to dismantle the regime’s network of espionage and terrorism in the EU, and what more can be done?

Sen. Torricelli: I was at that gathering along with hundreds of European and American dignitaries to support a Free Iran with Madam Maryam Rajavi and her ten-point plan for a free and democratic Iran. The regime in Iran is the enemy of its own people and nothing is more unbearable for it than international recognition of its legitimate opposition. The terror plot against Madam Rajavi and the pro-democracy rally in Paris was a very serious challenge to our democracies and freedom of speech.

I believe that European governments should be more proactive in combatting the Iranian regime’s operations, espionage, and disinformation campaigns within  Europe. Unless we all take a firm stand,  this will not be the last of these deadly terrorist plots.

I commend the conviction of Assadi in Belgium and I hope this sends a clear message to Tehran. The Mullahs must understand the futility of their efforts to undermine free speech and the democratic governments of Europe.

Q: During the investigations in the Assadi case, a green notebook was found on him with names of Iranian agents in Europe who were on Assadi’s payroll. What would you expect Western intelligence agencies to be doing with that sensitive information?

Sen. Torricelli: Well, I hope that they respond strongly to disrupt this network, expel any official agents, and discourage any contact with individuals assisting in terrorism. It’s also important to recognize that spreading disinformation about the Iranian resistance movement is a foundation of the regime’s terrorist and anti-democratic activities.

Real security for Europe and Iranian dissidents begins by dismantling these regime networks.

Q: What would you expect the Western governments to do now?

Sen. Torricelli: I think we are reaching a watershed moment regarding Iran. The newly selected President of the regime represents everything that is wrong with the theocratic dictatorship. The selection of a man with direct responsibility for mass murder is a direct challenge to the international community. The refusal to negotiate in good faith on the regime’s pursuit of nuclear weapons is an unmistakable message.

The world is beginning to understand that it was wrong to expect any moderation or change of behavior from this regime. This new awareness must lead to an understanding that the Iranian threat only ends with the election of a free and democratic government in Iran.

It’s time to stop dealing with the regime of Raisi and Khamenei. All free people need to stand firm against this regime’s violations and threats, support democratic and human rights values, and support the Iranian resistance led by Maryam Rajavi.

Q: If the Belgian Judiciary accepts to soften or ease the punishment for the 3 convicted accomplices of Assadollah Assadi on November 18, what message would that send to other people on the green notebook or sleeper cells throughout Europe and the United States?

Sen. Torricelli: I certainly hope that the Belgian appeals court will rule against the convicted accomplices of the Iranian regime’s terrorist-diplomat. It was a serious crime in which they knowingly engaged, in return for monetary benefit, to kill and maim thousands of innocent people gathered at the free Iran gathering in Paris in 2018. Their circumstances do not merit any mercy on the part of the court, and they should be punished to the fullest extent of the law. Nothing but a firm resolution for justice will dissuade and discourage the regime’s network of agents in Europe. There must be a message that you cannot come to Europe and engage in terrorist activities without serious consequences. Any leniency at this point will serve as an invitation to continue such crimes not only against Iranian dissidents but also against the free societies of Europe.