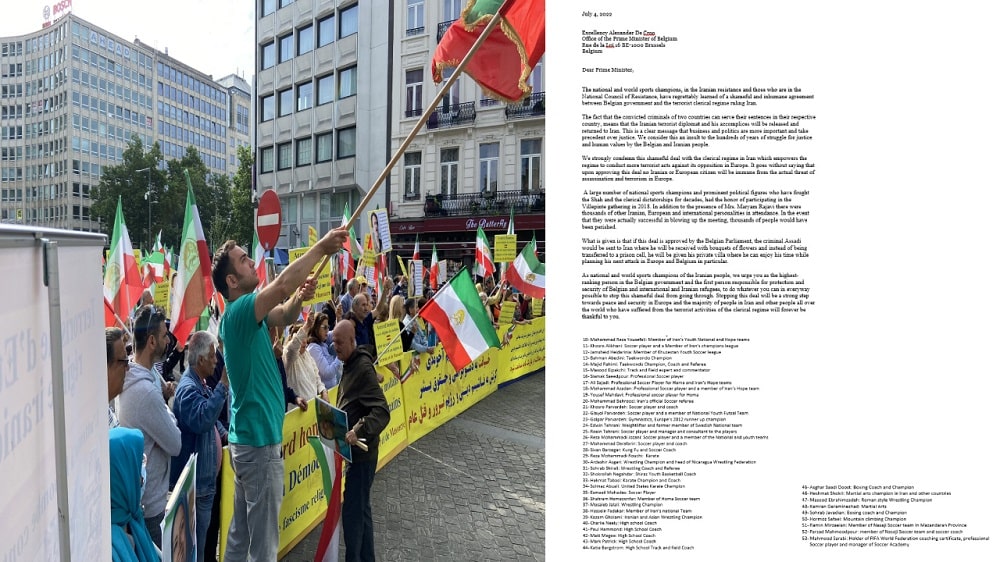 The national and world sports champions, in the Iranian resistance and those who are in the National Council of Resistance, have regrettably learned of a shameful and inhumane agreement between the Belgian government and the terrorist clerical regime ruling Iran.

The fact that the convicted criminals of two countries can serve their sentences in their respective countries, means that the Iranian terrorist diplomat and his accomplices will be released and returned to Iran. This is a clear message that business and politics are more important and take precedent over justice. We consider this an insult to the hundreds of years of struggle for justice and human values by the Belgian and Iranian people.

We strongly condemn this shameful deal with the clerical regime in Iran which empowers the regime to conduct more terrorist acts against its opposition in Europe. It goes without saying that upon approving this deal no Iranian or European citizen will be immune from the actual threat of assassination and terrorism in Europe.

A large number of national sports champions and prominent political figures who have fought the Shah and the clerical dictatorships for decades had the honor of participating in the Villepinte gathering in 2018. In addition to the presence of Mrs. Maryam Rajavi, there were thousands of other Iranian, European, and international personalities in attendance. In the event that they were actually successful in blowing up the meeting, thousands of people would have perished.

What is given is that if this deal is approved by the Belgian Parliament, the criminal Assadi would be sent to Iran where he will be received with bouquets of flowers and instead of being transferred to a prison cell, he will be given his private villa where he can enjoy his time while planning his next attack in Europe and Belgium in particular.

As national and world sports champions of the Iranian people, we urge you as the highest-ranking person in the Belgian government and the first person responsible for the protection and security of Belgian and international, and Iranian refugees, to do whatever you can in every way possible to stop this shameful deal from going through. Stopping this deal will be a strong step toward peace and security in Europe and the majority of people in Iran and other people all over the world who have suffered from the terrorist activities of the clerical regime will forever be thankful to you.