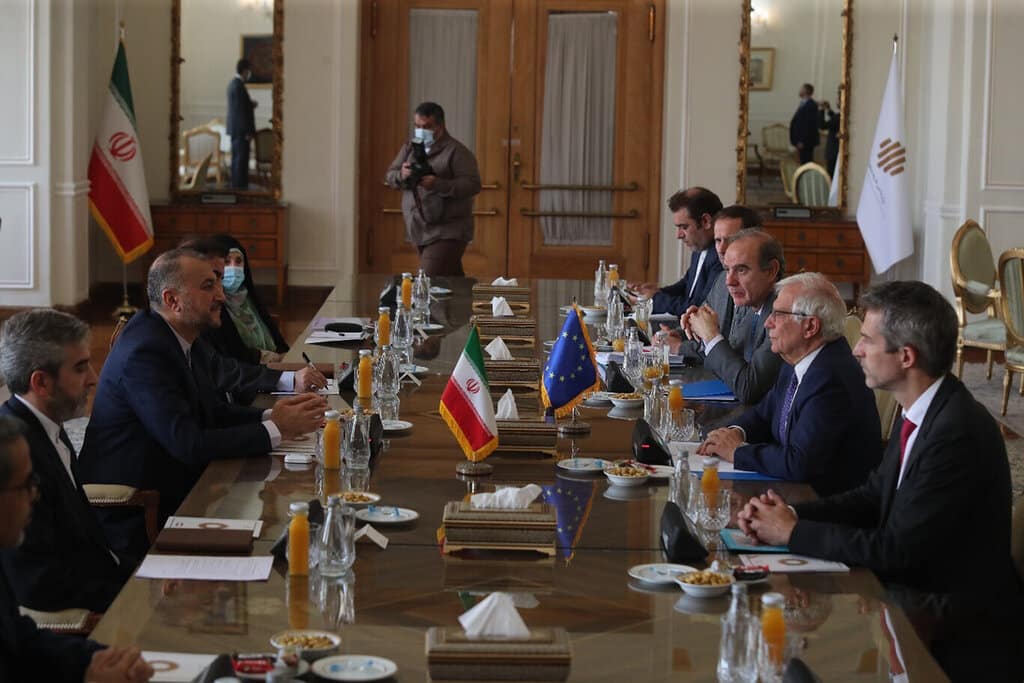 Last week’s proximity talks in Qatar between the U.S. and the Iranian regime, mitigated by the European Union, failed to take any steps forward in the Iran nuclear standoff, let alone reach a solution. The U.S. State Department now says there are no new talks in the books.

“To introduce anything that goes beyond the narrow confines of the JCPOA suggests a lack of seriousness, suggests a lack of commitment. And that, unfortunately, is what the team saw once again in Doha,” State Department spokesperson Ned Price told reporters on Tuesday, referring to the Iran nuclear deal with its official title, the Joint Comprehensive Plan of Action (JCPOA).

We are now in July 2022, more than six months after western negotiators were saying in December 2021 that there are only “weeks” left to revive the 2015 nuclear deal. As a result of the West’s refusal to adopt a firm and determined policy in the face of Tehran’s nuclear aggressions and repeated violations of its commitments, the mullahs’ regime has been kicking the can down the road, buying time to further advance its illicit nuclear weapons program, and develop its ballistic missile program as a means to deliver a nuclear payload.

On July 1, Bloomberg reported that the EU is in efforts to launch a new round of nuclear talks following the scheduled visit of U.S. President Joe Biden to the Middle East in mid-July. While seeming perfectly normal based on international diplomatic standards and procedures, this actually sends a continued signal of desperation that Tehran has been exploiting to the full extent for decades.

The West needs to understand that the Iranian regime has always, including now, had the weaker hand. Tehran needs the deal more than Washington and Brussels, and the US/EU should be acting firm and showing they’re willing to walk away. Otherwise, the mullahs will continue buying time, and repeat their nuclear commitment violations, e.g. disconnecting UN monitoring cameras and installing advanced centrifuges to enrich uranium at Fordow, a site well protected deep into the hearts of a mountainous region in central Iran.

“… we are of course alarmed, as are our partners, about the progress they’ve made in the enrichment field,” said U.S. Special Envoy for Iran Robert Malley in an interview with National Public Radio, repeating Price’s remarks about adding “demands that I think anyone looking at this would be viewed as having nothing to do with the nuclear deal.”

Iran has enough highly enriched uranium on hand to make a bomb and could do so in a matter of weeks, he said.

After speaking with EU foreign policy chief Josep Borrell, Iranian regime Foreign Minister Hossein Amir-Abdollahian said on Twitter, “Agreement is possible only based on mutual understanding & interests. We remain ready to negotiate a strong & durable agreement. The US must decide if it wants a deal or insists on sticking to its unilateral demands.”

This is another tactic from Tehran’s foreign policy playbook: kick the ball back into your adversaries’ court and take advantage of their uncertainty to take meaningful punitive action. As long as Iran’s belligerence goes without accountability, the mullahs in Tehran and the senior command of the Islamic Revolutionary Guards Corps (IRGC), the very entity behind the regime’s nuclear and ballistic missile programs, will feel confident to further their greed. For now, the main date on Iran’s calendar is the next Board of Governors meeting of the International Atomic Energy Agency meeting in September.

Following the UN nuclear watchdog’s half-hearted June resolution condemning Iran’s non-compliance with its inspectors and procedures, Tehran will be testing the resolve of the West to see if they’re willing to condemn the regime by referring its nuclear dossier from the IAEA to the UN Security Council. While Russia and China will obviously refuse to support any UNSC resolution reinstalling pre-2015 international sanctions against Tehran, the mere escalation is not in Tehran’s favor and they would rather avoid such a negative development in the logjam.

If the West plays its hands correctly as they easily can, they can both contain and drawback Iran’s nuclear weapons program, while employing the building blocks to tackle the regime’s support for global terrorism and gross human rights violations.

Parallel to the nuclear standoff, Iran is exploiting the West’s weak stand in regard to its decades-long policy of taking western hostages to exchange for its detained terrorists, and/or pursuing certain foreign policy objectives while also seeking financial benefits. The Obama 2015 nuclear deal remains under criticism as of today for providing Tehran $1.7 billion in cash for the release of a number of dual nationals held hostage by the IRGC.

As we speak, numerous groups and dignitaries from across the globe are warning about a new prisoner swap deal between Belgium and the Iranian regime, accusing Belgian politicians of providing a “green light to state-sponsored terrorism.”

Brussels is seeking speedy approval from its Parliament for a treaty that could lead to the release of Iranian diplomat-terrorism Assadollah Assadi and his three accomplices. Assadi and his team are serving time in jail in Belgium for “attempted murder and involvement in terrorism” for their role in plotting to bomb a 2018 gathering near Paris held in support of the Iranian opposition coalition National Council of Resistance of Iran.

The Belgian foreign relations commission voted in favor of the bill on Wednesday, setting a very dangerous precedent. The treaty bill, already causing an unprecedented political standoff in Belgium with potential ricochets across Europe, will be brought before the entire full 150-member Belgian Parliament on July 14.

This is yet another test before the West, especially the Green Continent, on their will to adopt a long-needed firm stance vis-à-vis the regime in Iran, known best as the world’s leading state sponsor of terrorism that is now on the brink of surpassing the “nuclear threshold,” meaning the ability to produce nuclear weapons undetected.