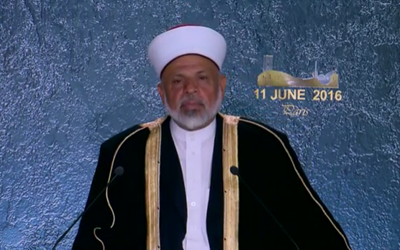 NCRI – Sheikh Taysir al-Tamimi, the former chief justice of Palestine, has sent a video message of solidarity to the upcoming “Free Iran” gathering which will be held in Paris on July 9.

In his message, broadcasted by the Iranian opposition satellite channel Simaye Azadi, Sheikh al-Tamimi condemned the mullahs’ regime in Iran for mass executions and in particular for its export of terrorism and complicity with Bashar al-Assad in the mass killing of Syrian people.

In his message Sheikh al-Tamimi said:

“As we know, tens of thousands of people in Iran have been tortured, imprisoned and killed by the Velayat-e Faqih (clerical) regime. Assad and the mullahs’ regime have agreed to suppress and kill their people in autarchy. Yet, the people of Iran and Syria are united as brothers against the oppression by the mullahs’ and Assad’s regime, and by God’s will these autocratic regimes will collapse and the people of Iran and Syria will celebrate their victory.”

“The mullahs’ regime believes that its survival is dependent on the survival of Assad’s regime and equally that the destruction of Assad’s regime would mean its destruction as well. Therefore, the mullahs’ regime kills their people and spreads war to the entire region. They want to impose their tyranny and oppression while they are afraid of justice and democracy. They believe if the people score a victory, their regime will definitely collapse.”

“I say that the meeting to be held in Paris will demonstrate the readiness of the Iranian’s Resistance, the People’s Mujahedin of Iran (PMOI or MEK), to overthrow the mullahs’ regime. The Iranian people, themselves must rule their country with liberty and democracy. As I heard Maryam Rajavi‘s speech about the massive rise of Iranian people outside of Iran in solidarity with the people of the world. I am certain that she supports women’s rights by citing the verses of the Quran and quotes of the Prophet Muhammad. As she mentioned, the God Almighty emphasizes in the Quran that women are the counterpart of men and this is what Maryam Rajavi has promoted while on the other hand the Velayat-e Faqih relies on terrorism, murder and fundamentalism, and the fundamentalist groups that kill people everywhere have their roots in the regime of the Velayat-e Faqih,” he added.