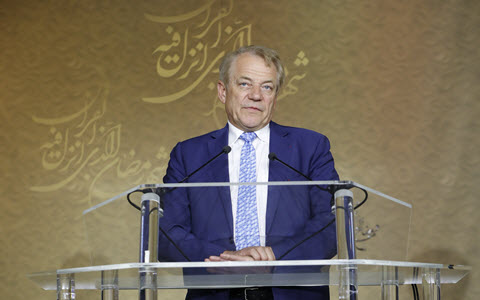 “I want to tell you, my friends in the Iranian Resistance and my Syrian friends why I’m here. Our country, France, and other European states are being attacked by terrorism under the banner of Islam. This phenomenon has targeted France in January and November 2015, July 2016 and more recently in Paris. And the last terrorist attack ISIS has claimed responsibility for was in Manchester, being an attack with a far more horrific message than previous counts,” he said.

“Therefore, our public has fully understood the threat. Of course, their request from their governments is to protect them. I believe they should demand more, including stronger positions against all those who support terrorism under the banner of Islam… Islamic fundamentalism is a mentality dating back to the establishment of the Islamic Republic of Iran and the mullahs’ rule nearly 40 years ago. The men and women falling victim to this terrorism are Muslim. Therefore, not only are Muslims not responsible for crimes under the name of Islam. In fact, they are the first victims. I believe this fact must be repeated over and over again because there are difficult discussions in our country in this regard…

“As head of the French Parliamentary Committee for a Democratic Iran we stand by your side in your demands. The two main demands are very much related to each other. One to recognize the true reality of the current Iranian regime, its historic responsibilities and its inflexibility. I have heard different remarks recently from the US government and those of Arabic countries. We will always be the representatives that seek the utmost firmness and refusing to provide concessions to the mullahs’ regime… another issue, especially in France, where you were accepted in 1981 by then President Mitterrand, is to recognize the Iranian Resistance,” he said.

“I believe the time has come that in our efforts in France and Europe, and across the globe, for us to unite since the recent elections showed the Iranian regime is facing major dilemmas inside the country and abroad. If we unite, yes, we can soon have iftar in Tehran. This is the dream I have for all of you,” Lefevre added.

The Rise of a Mass Murderer to Iran Presidency a Sign of Weakness, Desperation, Not Strength