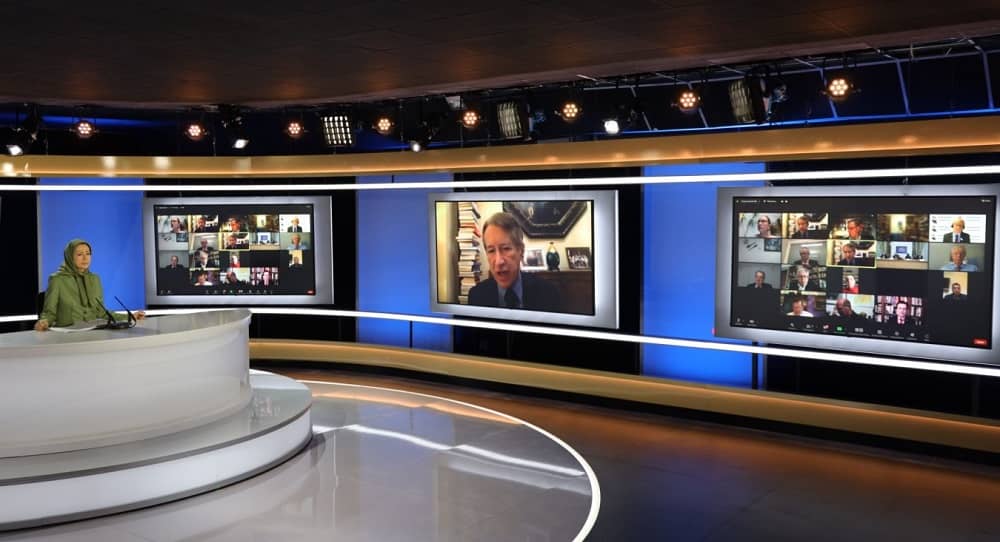 The annual session of the “Friends of a Free Iran” parliamentary groups was launched on Wednesday, February 9, with Members of the European Parliament and MPs from the parliaments of 19 countries attending.

“As a friend of Free Iran, we express our support for the struggle of the Iranian people and Resistance to overthrow this religious tyranny and for the establishment of a democratic and pluralistic republic which will serve peace and stability. We begin today’s joint session with opening remarks from Mrs. Maryam Rajavi who will give us first-hand information on the current situation in Iran prospects for Iran’s future,” said Antonio Stango, President of the Italian Federation for Human Rights.

Mrs. Rajavi hailed the martyrs and true leaders of Iran’s 1979 anti-monarchical revolution, adding the Iranian people’s resistance against the current religious dictatorship is, in fact, the continuation and evolution of the 1979 revolution. The Iranian people, who overthrew the Shah’s regime 43 years ago, are now chanting: “Down with the oppressor, be it the Shah, or the leader,” the latter referring to regime Supreme Leader Ali Khamenei.

Most of the dilemmas before Iran’s society today have become critical and reached a point of no return against the regime itself, leading to workers, farmers, teachers, and other sectors of society rising in revolt.

From late 2017 onward Iran has witnessed numerous nationwide protests, continuing to this day. Despite the regime’s claims, the mullahs enjoy no support among the society’s lower class, Mrs. Rajavi explained. In such circumstances, Khamenei resorted to installing Ebrahim Raisi, known as the “Butcher of the 1988 massacre,” as the mullahs’ president.

Raisi benefits Khamenei in two ways; first – preventing more uprisings, and second, giving him an open hand in his #nuclear project and foreign policy.
Therefore, Raisi is the most conspicuous indicator for the regime’s imminent overthrow. #ProsecuteRaisiNow pic.twitter.com/wJCIswJJmY

Khamenei sought to contain the regime’s crises by closing ranks to consolidate his grip on power. However, six months into Raisi’s tenure as the regime’s president, his cabinet has become the most inept in the past four decades for the regime.

The Iranian Resistance calls on the international community, especially Western governments, to adopt policies that, in the current critical situation, are the inevitable responsibility of these governments. #NoImpunity4Mullahs pic.twitter.com/kL4n6vfqQk

Various FOFI members also delivered speeches during the session, especially calling on European governments and parliaments to recognize the 1988 massacre in Iran as “genocide and crime against humanity.”

Over 30,000 political prisoners, mostly PMOI/MEK members and supporters, were executed across Iran in the span of just a few months during the summer and early fall of 1988.

“When I heard that Ebrahim Raisi was intending to come to Glasgow last November to attend the COP 26 climate change summit, we submitted a huge dossier of evidence from survivors of the 1988 massacre and from families of the victims to the British police, calling for his indictment for crimes against humanity and for genocide under universal jurisdiction and calling for him to be arrested if he set foot in the United Kingdom,” said former MEP Struan Stevenson. “He had boasted that he was looking forward to coming to Glasgow. And then at the last minute, a civil servant in Tehran appeared on the state television to say that he had no intention of coming to Glasgow at all,” Mr. Stevenson added.

“The European government’s silence, which is intolerable, has been a significant enabler for the Tehran regime to continue its horrendous domestic crimes, foreign terrorism, nuclear ambitions, with complete impunity to date, and we certainly think we must call on the European National governments,” he said.

“We should lend our support to and can cooperate with the NCRI as a viable democratic alternative to the regime which has the capability to establish a democratic, pluralistic and non-nuclear republic,” Mr. Perry concluded.

“The policy of appeasement is useless and a failure,” said former European Parliament Vice President Alejo Vidal-Quadras. “It’s counterproductive. It’s feeding our worst enemy… Let’s work altogether, restless, strongly, willingly to make Western governments and also the European Union, the External Action Service, the Council, and the Commission, of course, to change their policy in relation to Iran, and replace this useless policy of appeasement and dialogue with a firm strong policy that will lead to regime change in Iran,” he added.

Mr. Gideos Varekis, a former member of the Lithuanian Parliament and former Vice President of the EPP parliamentary group of the parliamentary assembly of the Councill of Europe, touched on the importance of holding the mullahs’ regime accountable for the 1988 massacre.

“A couple of weeks ago, 467 prominent current and former United Nations officials, Nobel Prize laureates, human rights experts, NGOs, and many famous and honorable people wrote to the United Nations and classified the [1988] massacre as a crime against humanity and an act of genocide. They called for an international investigation of this basis,” said Mr. Varekis.

“We have to demand accountability for the perpetration of this grave crime, including against the regime of Supreme Leader Ali Khamenei and its president Ebrahim Raisi,” he added.

“A realistic assessment of the Iranian situation shows that the answer lies in the overthrow of the religious dictatorship. We are members of the committees which support the democratic resistance, for which reason are the target of attacks by the Iranian regime,” said Leo Dautzenberg, head of FOFI – Germany, and a former member of the Bundestag.

“Thank you, Madam Rajavi, for being an inspiration for your great people in Iran. Madam Rajavi, your relentless vision of a free Iran is no longer a hope. It is no longer a dream. It is now a reality waiting to happen,” said Maltese MP Mario Galea. “Regretfully, we are living in a world which is heavily sedated by indifference, selfishness, stupidity, or short-sightedness. A world which foolishly chooses to wait till tomorrow to condemn crimes against humanity in Iran rather than acting today to prevent,” he added.