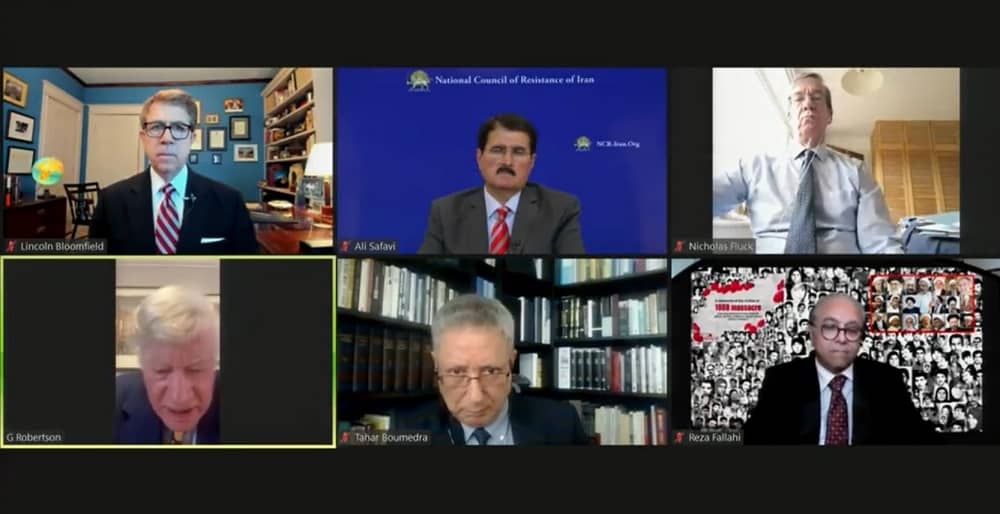 In an online conference held on Thursday by the National Council of Resistance of Iran (NCRI), human rights experts and jurists weighed in on the implications of Ebrahim Raisi becoming the Iranian regime’s president, and the role that the international community must play to hold the regime’s authorities to account for their crimes.

On June 19, the Iranian regime’s supreme leader Ali Khamenei selected Ebrahim Raisi as the regime’s new president. Raisi’s selection met international outrage, mostly due to Raisi’s direct role in the 1988 massacre of over 30,000 political prisoners. During an online conference on Thursday, an international panel of human rights experts reviewed the outcome of Raisi’s presidency and the international community’s obligations.

Raisi was a member of the “Death Commission” responsible for deciding the fate of prisoners throughout Iran in short, kangaroo trials.

The Iranian regime’s sham presidential election met a nationwide boycott. According to the People’s Mojahedin Organization of Iran, and based on reports of over 1,200 observers backed by more than 3,500 video clips from 400 cities, less than ten percent of Iran’s eligible voters actually cast their ballots.

“As you are already aware, on Friday, Ebrahim Raisi was installed as the next president of the Iranian regime,” Ali Safavi, a member of the Foreign Affairs Committee of the National Council of Resistance of Iran, (NCRI) and the event’s moderator. “This development was, of course, met with international outrage not least because someone whom the Iranian people have dubbed as the henchman of the 1988 massacre when 30,000 political prisoners were sent to the gallows by the death commissions in kangaroo trials that lasted a few minutes in which Raisi was a member, was propelled to the presidency in a process that was neither fair nor free. It was in one word a travesty.”

“He is, in reality, the poster child of the religious tyranny which rules Iran today. Raisi’s ascension also put an end to the fallacious ‘moderate vs hardliner’ narrative, which the Iranian people had debunked in their chants of ‘hardliner, reformer, the game is now over’ during the four nationwide uprisings since 2017,” he said.

The first speaker of this event was Geoffrey Robertson, QC, who served as a UN appeal judge and President of the War Crimes Court in Sierra Leone from 2002-2007

“This was indeed one of the greatest crimes against humanity, certainly the worst committed against prisoners since World War II. These kangaroo courts were not even courts at all. Raisi was one of the key figures of these trials,” Mr. Robertson underlined, referring to Raia’s role in the 1988 massacre.

3) @RobertsonQC, a human rights barrister, academic, and author. A former UN appeal judge and President of the War Crimes Court in Sierra Leone from 2002-2007#ProsecuteRaisiNOWhttps://t.co/PbAQZbGAzb

“He was 28 at the time. He was the deputy prosecutor of Tehran. It was simply a body that directed people to the gallows if they were not prepared to renounce their opposition. Raisi’s guilt is not only a matter of public record. He has admitted that he was a member of the death committee,” he added.

Mr. Robertson underlined that the 1988 massacre in Iran, “In addition to a crime against humanity,” is “might even be a genocide. This was an unlawful exercise of state power.”

“The UN will have to grapple with the fact that one of its members is led by an international criminal. Diplomats will have to be careful. They must never shake the bloody hands of this criminal. His presence in any international forum will damage that forum. It poses a problem that should first be addressed by the UN. They should go back and reexamine the events of 1988, the lies of Iran’s representative, and the role of Raisi in one of the worst crimes against humanity since the war,” Mr. Robertson said about the international community’s obligations.

The next speaker was Mr. Nick Fluke, a distinguished High Street Solicitor, and the President Emeritus of the Law Society of England and Wales, in which he has been a member for 16 years.

“Raisi said on record that he was proud of his role in the massacre of political prisoners. This should be a wake-up call for all of us. We should not remain silent,” Mr. Fluke stressed.

9) Nick Fluke: Raisi said on record that he was proud of his role in the massacre of political prisoners. This should be a wake-up call for all of us. We should not remain silent.#ProsecuteRaisiNOW #Iranhttps://t.co/bbPHX2885f

“When he announced his candidacy, he promised to fight poverty, corruption, discrimination. How do you square that with his past? He can’t be a champion against corruption. It’s interesting that dissidents urged voters to boycott. He even won the election with a very low turnout,” Mr. Fluke said, referring to the nationwide boycott of the regime’s sham election and Raisi’s bogus claims for having a larger turnout.

Mr. Fluke underlined that “Iran has the second-highest number of executions, second only to China.”

The third speaker was Ambassador Lincoln Bloomfield Jr. is Chairman Emeritus at the Stimson Center. He served as a national security official in the administrations of President Reagan, George H.W. Bush, and G.W. Bush. Mr. Bloomfield was former Assistant Secretaries of State and Defense as well.

10) Ambassador Lincoln Bloomfield Jr, former Assistant Secretaries of State and Defense: What issues does the Raisi presidency raise for the international community? What policy should governments follow now …#ProsecuteRaisiNOWhttps://t.co/EuBeDLzJ9n

“In 43 years since the revolution, Khomeini founded the religious dictatorship and then handed his job to Ali Khamenei. Khamenei didn’t have religious credentials but was reliable to keep the regime in power. And now Raisi is even more reliable to crackdown on dissent,” Ambassador Bloomfield highlighted.

“But since 2017, under the so-called moderate president Rouhani, Raisi has been putting people in jail. Raisi’s role has continued since the 1988 massacre before our eyes. This regime is trying to hang on to power at the expense of legitimacy,” Ambassador Bloomfield referred to Raisi’s dark record of human rights which continues to this day.

“The Iran watchers in Washington are very confused. They think Raisi’s presidency will result in a quick return to the nuclear deal. They have been living in an illusion. You’re now seeing a relatively young apparatchik becoming president and getting ready to become the next supreme leader. This is a man who is there simply to perpetuate a dictatorial religious regime,” Ambassador Bloomfield said, debunking talking points of the regime’s apologists in the west that Rais’s selection could result in a change in the regime’s behavior.

Reza Fallahi, a former political prisoner, who resides in London, also joined this conference, sharing his thrilling experience in the regime’s dungeons, where he survived the 1988 massacre.

13) I was summoned to the death commission, which was comprised of 4 members. Hossein Ali Nayyeri, the sharia judge, Morteza Eashraghi, the prosecutor, Mostafa Pourmohammadi, the rep. of the Intelligence Ministry and Ebrahim Raisi, the acting prosecutor#ProsecuteRaisiNOW #Iran

“I was arrested in September 1981 for supporting the People’s Mojahedin Organization of Iran and I was released in 1991. I am one of the few survivors of the massacre, for which the planning began in late 1987 and early 1988. I remember when Iran’s regime accepted the 1988 resolution in the United Nations, a senior official said the fate of political prisoners will be reviewed soon,” Mr. Fallahi said.

“ The actual prosecution process began in July 1988 for prisoners in their “red category.” None of the prisoners summoned returned. Ebrahim Raisi displayed particular hostility towards me and my cellmates. They asked in affiliation with which political organization was we arrested, do we believe in the Islamic Republic, are we willing to repent, and so forth. Overall, only 12 people survived in our ward” Mr. Fallahi added.

Mr. Fallahi underlined that “As a former political prisoner, I am concerned about the recurrence of the events of the summer of 1988. To stop the regime from committing another massacre the international community, in particular the United Nations, must end the culture of impunity and launch an independent investigation into the massacre and bring people like Raisi to account.”

Mr. Tahar Boumedra, a former Chief Of The Human Rights Office Of The United Nations Assistance Mission For Iraq (UNAMI) And Legal Expert, was the last speaker at this event.

17) Tahar Boumedra: JVMI is joining its voice to Amnesty International, and we are calling for Ebrahim Raisi to be investigated for his role in past and ongoing crimes against humanity and for the international tribunals to bring him to justice. #Iranhttps://t.co/EuYZGtrl52

“The international community must promise the Iranian people that they stand by the Iranian people in support of their basic aspirations and that the world today is not a safe place for the murderers of political prisoners and the suffering people,” Mr. Boumedra said adding,

“The JVMI is joining its voice to Amnesty International, and we are calling for Ebrahim Raisi to be investigated for his role in past and ongoing crimes against humanity and for the international tribunals to bring him to justice,”

“Head of states might claim immunity. But we are not going to wait till immunity is removed from Raisi to act. We are going to act, and we are going to put this situation toward the British system. It will be discussed among lawyers. As far as JVMI is concerned, I have the procedures to follow. It is difficult when it comes to heads of state, but for those who are not heads of state, the British judiciary allows extraterritorial trials.”