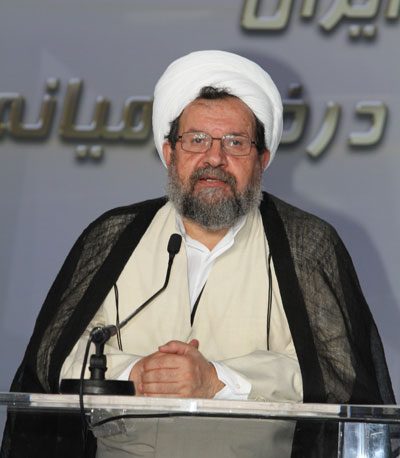 NCRI – Interview with Ayatollah Jalal Ganjei, Chairman of the Committee on Freedom of Religions and Denominations of the National Council of Resistance of Iran (NCRI), on the eve of the 50th anniversary of the People’s Mojahedin Organization of Iran, PMOI (or Mujahedin-e Khalq, MEK):

Q – How did you first come to know of the PMOI? Where did you first hear the name of this organization? And what did you hear about it?

When the PMOI members were arrested by the SAVAK, the Shah’s secret police, back in 1971, I had a friend who I didn’t know was a PMOI member, and he informed me that a group of young Muslims struggling against the regime had been arrested and he went on to mention some names, of which I knew Engineer Nasser Sadegh. But I still didn’t know the name “People’s Mojahedin” until a few months later when the organization’s first martyr, Ahmad Rezai, was surrounded by SAVAK agents and after which a battle erupted and he was martyred by the SAVAK. The method of this death made clear that PMOI members were different from previous generations of Iranian religious fighters. Then I came across the book “Hossein’s Path” and my knowledge grew about the PMOI’s way of thought. I found the answers to many of my questions.

Q – What was the atmosphere inside Iran’s seminaries and religious circles prior to the foundation and rise of the PMOI? How do you evaluate the support the PMOI enjoyed amongst the clerics in the seminaries before and after the 1979 revolution?
Most of these circles were not willing to rise and fight against the Shah, and they preferred silence and conciliation vis-à-vis the Pahlavi regime. Very limited circles who did have a role in the struggle, and some who actually went to the Shah’s prisons, had no new religious ideologies and didn’t present any new path other than revealing the cruelty and/or corruption of the Pahlavi regime. However, with the rise of the PMOI, and especially after the courts and the publication of the brave and heroic defense statements publicly presented by the PMOI prisoners in the courts, many of the people – including the clerics – had the opportunity to gain knowledge about the PMOI’s social-economic objectives and the depth of their theoretical and religious mentality. From then on, a significant number of clerics, especially the youth in the seminaries, became very fond of the PMOI. There were many who established contact with the PMOI. Most of those who were arrested and thrown into jail managed to establish relations with the PMOI more easily from inside prison. Little by little, some of the values and even traditions inside the prisons were being practiced in religious schools across the country.

Q – How do you analyze the effects of the PMOI and the tolerant and flexible version of Islam it represents in Iran’s political atmosphere, especially from the viewpoint of their understanding of Islam?
Even prior to the 1979 revolution the PMOI was able to send its message to the society, and it was completely against the reactionary religious viewpoints. They were specifically against the conciliatory senior clerics who were close to the Shah and his followers, and they supported the deprived people and lower class of the society who were always the hardworking branch. They supported those who were deprived of their basic economic and social rights and those who were always kept years behind other branches of the society. Therefore, during the 1979 anti-monarchial revolution their different policies and slogans were very well understood and the people would easily come to learn that the PMOI would accept nothing less than the complete downfall of the Shah’s dictatorship. Thus, after the Shah was overthrown and the reactionary beliefs of Khomeini and his regime became more and more clear to the public, day by day more and more groups would join the PMOI. This reached a point where in the eyes of the mullahs the PMOI movement became the second largest political-social current in Iran, and very close behind the current launched by the followers of Khomeini and the mullahs’ regime, whose true identity was yet to be revealed for the Iranian people in general.

Q – You are very familiar with Khomeini’s mentality. Khomeini issued numerous orders for the PMOI to be massacred. Did Khomeini’s viewpoint of the PMOI simply come from a political perspective and was it only related to the period after he rose to power in 1979, or was his perspective of Islam different from that of the PMOI even prior to the 1979 revolution?
Anyone familiar with Khomeini’s viewpoints understands that Khomeini, like all other Marja’ (Shiite religious leadership) in Iran, spoke of a type of Islam that denies rights, social and intellectual freedoms, imposes various types of old cruelties, provides sharia legitimacy for slavery, feudalism and even exploiting deprived classes of the society, and in all their preaching they encourage misogynist perspectives. To this end, Khomeini was terrified of the PMOI gaining strength long before the 1979 revolution. Therefore, his animosity with the PMOI emerged far back before the political confrontations following the 1979 revolution. This was an obsessive and so-called religious enmity rising from Khomeini’s reactionary fanaticism.

Q – The Iranian regime is the first theocracy in modern history, and more specifically the first state based on Islamic fundamentalism in modern history. If the PMOI never came to exist in Iran as a Muslim force, what would the political and religious situation be like in Iran?
Under such a scenario rest assured that Iran would be in the 4th decade of an ISIS-like empire ruling over the region, and most of the people under its rule would be speaking Farsi and risen from Khomeini’s Iran.

Q – In recent centuries do you recall an organization similar to the PMOI having an Islamic perspective or social methods in their perseverance against a state claiming to represent Islam?
The PMOI’s objective are without a doubt rooted in the true messages of Islam, which is based on logic and scientific advances, and also founded upon a scientific perspective of the principles of evolution of the universe, that goes as far as explaining the birth and advances made by humanity. These objectives are also in support of the deprived people in today’s society. Now, if we consider the fact that the PMOI has gone a step further than just publishing and preaching its viewpoints, but actually building a social current based on its beliefs, that is where we reach an understanding about its difference from other groups and even progressive religious beliefs. However, to answer your question, it is once again necessary to take into consideration that the PMOI has produced, and presented to this world, a new generation of organized activists in this regard. If we take a look at these achievements in general, we would easily come to understand that this PMOI movement is an unprecedented and unparalleled development in the history of Islam, and also the history of progressive movements.