Interview with Struan Stevenson about the “Free Iran” rally 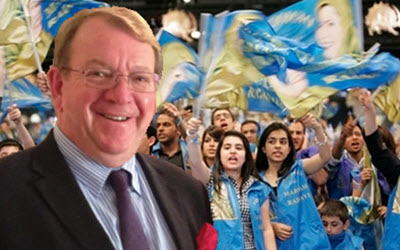 NCRI – Former European lawmaker Struan Stevenson has been a staunch supporter of freedom for the Iranian people for many years. Until his retirement in 2014, he chaired the Friends of a Free Iran Intergroup (Caucus) in the European Parliament for over 10 years. During that time and in subsequent years, he has participated in the annual “Free Iran” rallies organized by the Iranian Resistance each year in Paris.

We asked him why he thinks the rallies are important to Iranians inside the country.

Stevenson: I have attended many of the great NCRI rallies in Paris and have been staggered at the massive crowds who attend every year. Last year there were in excess of 100,000 people, most of them from the worldwide Iranian diaspora. Almost every single one of these people will have extended families inside Iran, meaning that potential support for the Iranian opposition is colossal, numbering millions. This gives the lie to those who contend that the Opposition has little or no support inside the country. Of course people cannot openly declare their support for the PMOI/MEK inside Iran, as to do so will lead to immediate arrest, torture and execution. Nevertheless an active network of courageous PMOI members and supporters inside Iran and even inside government institutions continue to keep the West informed of the clandestine nuclear and military activities of Iran’s Islamic Revolutionary Guards Corps (IRGC) and the Qods Force, at huge personal risk to their own safety and security. We have much to thank them for in the West, not least that they were the first to alert us to the mullahs’ nuclear programme back in August 2002. We should be throwing our total support behind the Iranian opposition instead of doing dirty deals with the mullahs and their murderous regime.

Question from ncr-iran.org: Former New York Mayor Rudy Giuliani said in one of these grand gatherings that the combined number of participants at the U.S. Republican National Convention and the Democratic National Convention is less than the number of people who participate in the annual gatherings of the Iranian Resistance. How can an opposition movement have the strength to organize such a meeting?

Rudy Giuliani is quite correct. He is one of many prominent and internationally renowned figures who address the annual NCRI gathering in Paris. Having attended many of these events, I never cease to be overwhelmed by the size of the crowd, who come from every corner of the globe to show their outrights support for the only viable opposition movement that promises to restore, peace, justice, democracy, human rights, women’s rights, an end to the death penalty and the abolition of nuclear weapons, to this oppressed and beleaguered nation. The strength of this opposition movement is a clear indication that they are an alternative to the ruling mullahs and should be recognized as such by our governments.

Question: How do you assess the Iranian situation one year after the nuclear deal? Do you think Tehran is weaker or stronger?

Regarding the nuclear deal, while we condemn the concessions given to the regime and the lifting of most of the sanctions, we also recognize that this deal created a substantial internal crisis and fighting within the ruling clique, which has significantly weakened the regime. Of course we also welcome the fact that the regime’s ability to make a nuclear bomb has really decreased. But it is important to remind the West that the lifting of sanctions and the release of frozen assets, despite the wishful thinking of the West, did not result in any benefits for the Iranian population. On the contrary, instead of the money being used for the welfare of the people, it has in fact been used to finance terrorism, supporting Bashar al-Assad’s on-going bloody civil war and other terrorist and sectarian military projects in Iraq and throughout the Middle East.

Question: What practical measures can Western governments take to support the establishment of democracy in Iran?

It is time we woke up to the fact that as long as the mullahs remain in power there will be no possibility of peace in the Middle East. Federica Mogherini, the EU’s High representative for Foreign Affairs & Security should stop her business-as-usual approach to Tehran. She should be shouting in anger and condemnation at the human rights abuse that takes place in that country on a daily basis. The West should be entering into dialogue with the political coalition that is the NCRI, rather than pussyfooting around with the mullahs in Tehran.  The NCRI under the inspiring leadership of Mrs Maryam Rajavi, offers the best possible hope for peace and stability in the region.

A major force in the NCRI is the People’s Mojahedin Organization of Iran (PMOI), which believes in a democratic, tolerant Islam and has bravely stood up against fundamentalism and violence. The PMOI’s vision of democracy, human rights, women’s rights, abolition of the death penalty, abolition of nuclear weapons and non-interference in other countries is surely the only way forward for Iran and its beleaguered and oppressed population. The West should impose international sanctions for human rights violations. These actions could lead to breaking the atmosphere of fear and terror and ultimately to another uprising which could topple the mullahs’ fascist regime and restore democracy to Iran.