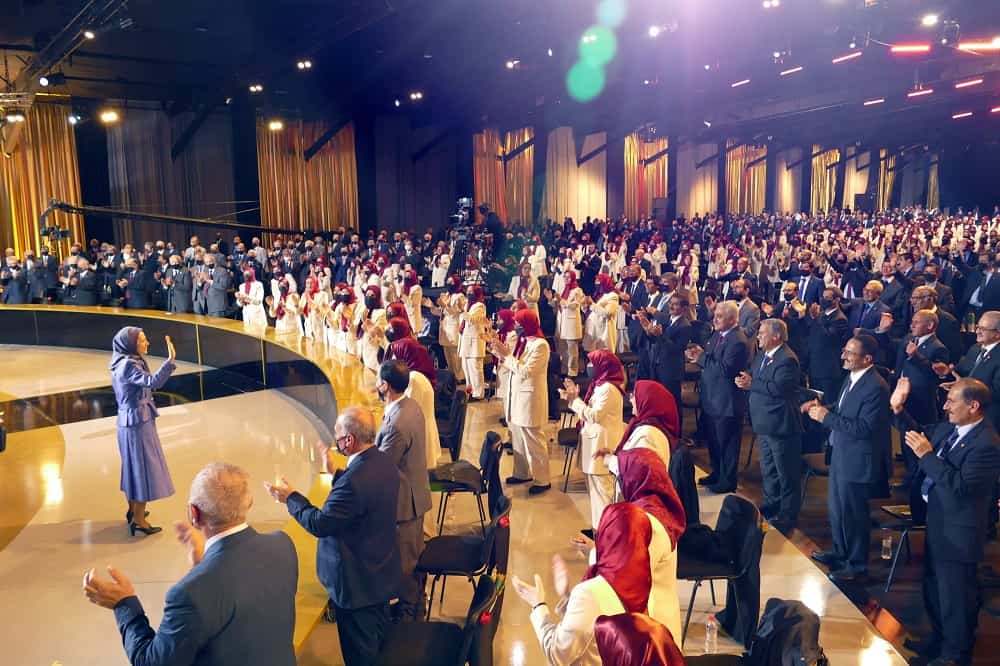 In an event in Ashraf-3, home to thousands of members of Iran’s main opposition movement, the People’s Mojahedin Organization of Iran (PMOI/MEK), the participants, including 1,000 political prisoners under the regimes of the mullah and the Shah, called on the international community to break its silence vis-à-vis the 1988 massacre and the November 2019 uprising and called for the prosecution of the perpetrators of both massacres, including the Iranian regime’s Supreme Leader Ali Khamenei and his president Ebrahim Raisi.

The participants paid homage to the memory of 30,000 political prisoners massacred in 1988 and 1,500 protesters slaughtered during the November 2019 uprising. Several former political prisoners spoke at the event and recounted their harrowing ordeals while in captivity.

Ms. Masoumeh Malek Mohammadi, one of the MEK’s officials who had spent nearly five years in prison moderated the program.

“The summer of 1988 saw the largest massacre of political prisoners in modern history,” said Ms. Mohammadi, adding, “In today’s program, we are trying to show a glimpse about the facts and dimensions of this horrible crime, as well as a picture of the resistance of the PMOI. The victims of this crime were the most enlightened, selfless, and revered children of the Iranian people, who were hanged in groups behind the concrete walls, in the death corridors of various prisons”.

The event came in simultaneous with the transfer of the court proceeding in Stockholm of an official of the clerical regime for his role in the 1988 massacre to Albania.

The entire Stockholm district court relocated to the Albanian port of Durres, at the prosecution’s request, to hear testimony from witnesses to be questioned until November 18, who are all members of the MEK and reside in Ashraf 3 near Durres.

In providing an explanation for the rare decision, the Chief Swedish Judge of Noury case on October 26 said: “Despite all the difficulties and challenges for the transfer, we made this decision considering the significance and importance of testimonies of the plaintiffs who are in Albania. Given the importance of these testimonies for the case, all the six judges, two prosecutors, lawyers for the plaintiffs will all come to Albania.”

Parvin Firoozan, who has spent nine years in the regime’s prisons, was the first speaker. “Although the real dimension and details of the 1988 massacre of political prisoners are unknown, the execution of female MEK members remains a mystery and is kept in dark more than other aspects of the massacre and very few women have survived that genocide,” Firoozan said.

The next speaker was Asadullah Nabavi, who had spent 13 years in prison.

“Semnan Prison was full of political prisoners at the beginning of the massacre, and at least 50 MEK supporters were held in general and solitary confinement. But in October 1988, both general ward and solitary confinements were completely empty, and by mid-October 1988, only three of us survived.” Nabavi said adding,  “The number of martyrs in Semnan is definitely high. This is only a small part of mass executions in a tiny city. Through these figures, one can assess the number of executed MEK supporters throughout Iran, showing the nationwide scale of the massacre and genocide.”

The martyrs of the November uprising are alive and immortal.
They are the blossoms of a determined generation and an arisen nation, heralding the arrival of the angel of freedom in #Iran. #IranProtestshttps://t.co/jBKGgzmZNN pic.twitter.com/s4z2uMwWje

The resistance of women in the regime’s prisons was highlighted by other survivors. One of these heroic women was Homa Jaberi, who spent months in the so-called “Residential Units,” where women were tortured both physically and psychologically.

“The conditions there were very terrible. They covered us from head to toe with blindfolds and chadors. We stood in absolute silence against the wall, although they allowed us to sleep once a day. They attacked us several times a day,” Ms. Jaberi recalled the tortures in the “Residential Units” in Ghezel Hesar prison. “We were severely tortured. If someone was making any noise, they would be tortured, to death, several people have been brutally beaten to death.”

Hassan Zarif, who spoke next, also underlined the resistance of the MEK women. He was in Evin prison during the massacre. “After two or three days, I realized that there was no one left from the first floor, where female supporters of the MEK were held, and on the second floor…” Zarif said.

According to Ali Sarabi, the next speaker, the regime had started mass executions in the early 1980s.

“In each of the general prison cells of Evin, which were about 5 x 6 square meters, about 100 to 120 prisoners were accommodated. Packed in the cells as such, we could not sleep and had to rest by turn. Many prisoners had wounds due to torture or wounded during arrest,” he said. “They were under tremendous pressure in this situation. Even though during that period sometimes up to 300 people were shot every night, the number of prisoners was not reduced, and new detainees replaced those executed by firing squads.”

“They included students, graduates of various fields, specialists, university professors, writers, artists. There have been doctors, nurses, medical staff, and students in various fields of medicine. I will suffice to mention the names of several of my medical colleagues: Dr. Masoumeh (Shurangiz) Karimian, Dr. Tabibinejad, 55, and Dr. Firooz Saremi, 60, were hanged in public in Tabriz,” Dr. Ashtiani added. It is worth noting that Dr. Ashtiani’s brother, Mehdi, was also executed during the 1988 massacre. 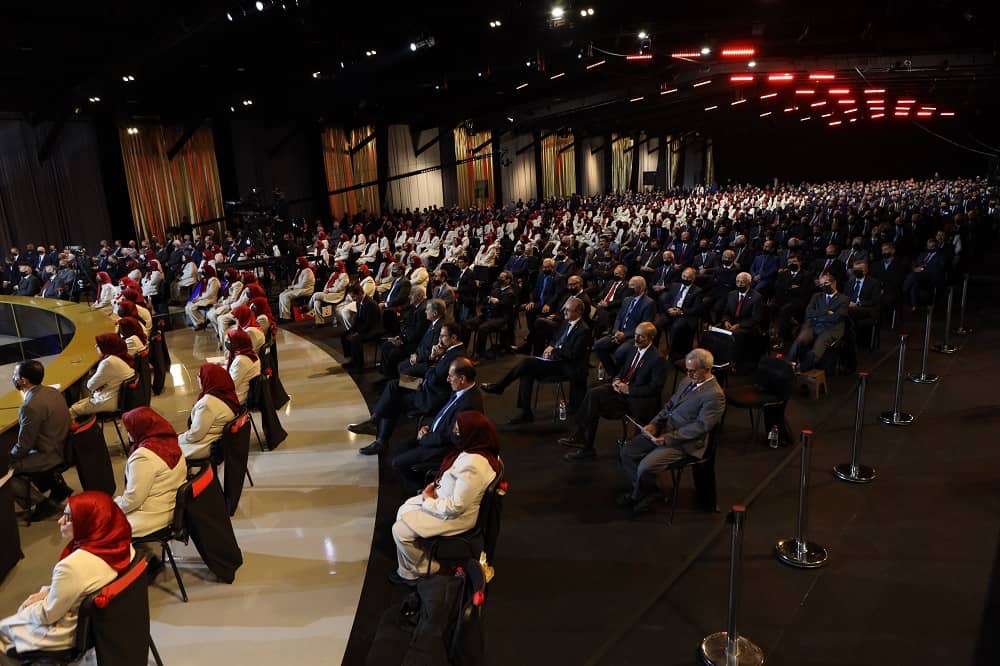 Other participants of this event, who were imprisoned in other prisons across Iran, testified the extensiveness of the regime’s brutality across the county.

“the story of those MEK sympathizers and members massacred in prisons of Iran’s countryside been untold,” said Abbas Torabi, who was imprisoned in Zahedan, southeast Iran.

Abdolrasoul Ebrahimian, who spent 17 years in the regime’s prison, also shared what he witnessed during the 1988 massacre in Tabriz prison.

“In late July 1988, when the visits were stopped, and the suppression increased, we noticed changes in our surroundings. The guards became more brutal,” he said. “In the same days, we heard the sound of Friday prayers on the guards’ TV chanting about the execution of the MEK. One of the inmates said that the situation was like in 1981 and that they were executing prisoners in groups. Whoever left the cell never returned. A non-political prisoner also told us that the situation was terrible. Political prisoners are being executed. Hearing this news, we prepared ourselves.”

Mrs. Maryam Rajavi, the President-elect of the National Council of Resistance of Iran (NCRI) joined the event and briefly addressed the audience. In part of her remarks, Mrs. Rajavi said, “The flames of the November 2019 blood-soaked uprising have not and will never be extinguished. The clerical regime turned it into a bloodbath. But those 1,500 young souls and teenagers whose chests hearts were pierced by the barrages of bullets in the streets and, alleys, and marshlands will rise again. They will rise again in the form of a big and immense army with countless soldiers. They will continue their battle to fight until more uprisings like the one in November 2019 erupt, until the masterminds and perpetrators of all the  massacres are prosecuted, and until religious fascism in Iran is overthrown.”