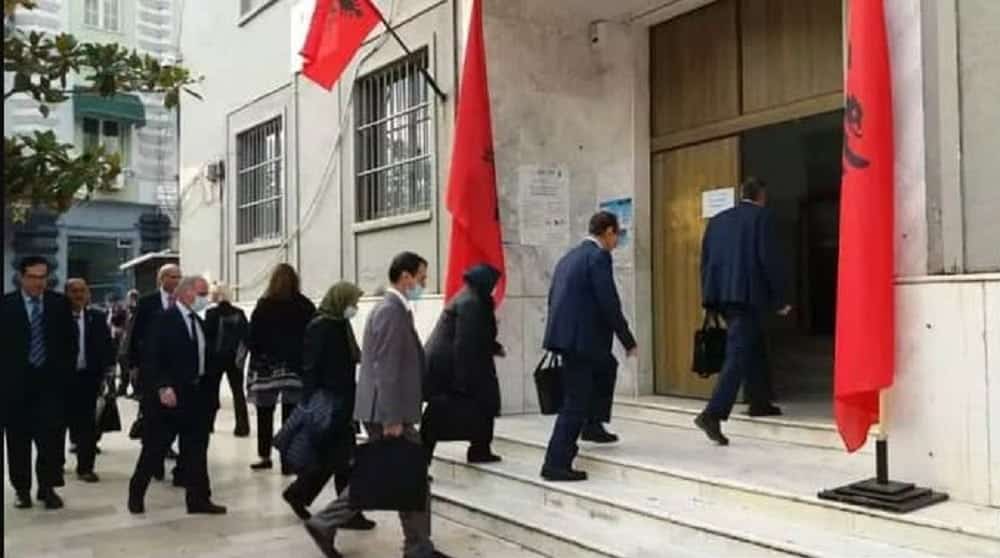 Monday marked the thirty-eighth session of Hamid Noury’s trial, and an Iranian prison official was charged with participation in the 1988 massacre of political prisoners. Noury was in Gohardasht prison at the time of the massacre. Almost thirty years later, he was arrested in Sweden.

The last four sessions have been held in Albania. The location of the trial was transferred after 34 sessions in Sweden to Albania per prosecutors’ requests,  as there are thousands of members of the Mujahedin-e Khalq (MEK). The MEK members were the primary target of the 1988 massacre of over 30,000 political prisoners across Iran.

On Monday’s session at the District Court of Durres, Akbar Samadi, a former political prisoner, and a MEK member testified. Samadi was arrested in 1981, while he was only 14 years old. He spent ten years in prison. In April 1986, Samadi was transferred to Gohardashat prison.

“On July 30, 1988, I was in the upper floor of Gohardasht’s Ward 2. They transferred me and several others to a corridor,” Samadi said, referring to what was later known as the “Death Corridor.”

The “Death Commissions” across Iran implemented a fatwa by the regime’s then-Supreme Leader, Ruhollah Khomeini. Based on this fatwa, whoever supported the MEK was considered an enemy of God and should be immediately executed.

“As we were being transferred, Davoud Lashgari [one of the senior authorities of Gohardasht] saw us and yelled at the prison guards, ‘Why have you brought this group? Don’t bring them until I’ve called them by name,’” Samadi said.

“We were taken to solitary confinement. A few hours later, Lashgari came and read our names and transferred us to our previous ward, the Ward 3,” Samdi said.

“They had emptied a building in preparation for the massacre,” Samadi said, and added, “Due to the fact that this section had no connection to the other sections, and the administrative building prevented this ward from being connected to other wards, it was located far from the other wards. That is why they had chosen it as the site to carry out the executions.”

“All that we heard indicated changes and certain developments in the making. A number of the prisoners had seen Davoud Lashgari and a number of prison guards in the ward’s TV room. They had a wheelbarrow with ropes (nooses),” Samadi added.

According to Samadi, some prisoners were taken out of their cells on July 30 and July 31. “On July 30, Gholam Hossein Eskandari, Hossein Sobhani, Mansour Ghahremani, Reza Zand, Mansour Kabari, and several others were taken out.”

“On August 1, while we were talking about what was happening, Lasghari suddenly entered the ward and said: ‘Prisoners who have a sentence of 10 years and more, come out,’” Samadi said.

“We were around sixty to seventy prisoners who were taken out. Lashgari asked us a few questions, then divided us into two groups. A group of prisoners and I were taken to one of the sections, and the rest of the prisoners were taken to solitary confinement,” Samadi said.

“On August 3, the guards came to the lower section and read out two series of names. My name was in the first,” Samadi said. “We were brought to the Death Corridor early in the morning. After a few minutes, Nasserian [Mohammad Moghiseh] read my name and took me to the Death Commission. After removing my blindfold [Hossein Ali], Nayyeri [one of the members of the Death Commission] asked my name and particulars. Then he asked the reason for my arrest and my sentence and whether I wanted to be pardoned. I said I’ve been in prison for seven years, and the remaining three years are not worth asking for a pardon.”

“He asked me what my crime is. I said I’m a supporter. ‘A supporter of what?’ he asked. I said the MEK. He told me to go out. I came out of the room and sat down. I didn’t know exactly how the executions were proceeding. I just knew that several had been executed.”

While in the death corridor, Samadi was summoned by Ebrahim Raisi, a member of the “Death Commission” and the regime’s current president. “He took me to one of the rooms near the Death Commission’s office. He asked my name and sentence and told me to denounce military confrontation. I told him when I was arrested, and I was shorter than a G3 rifle. He told me to condemn Komeleh, one of the Kurdish groups. I told him I’m not Kurd nor tied to Komeleh. He got mad and threw me out of the room,” Samadi said.

“When I returned to the corridor, I noticed that the guards had taken away the previous prisoners and had brought in a new group. I sat next to Abbas Afghan, who had lost his mental stability under severe tortures. They took him for execution. He wasn’t the only one to have such conditions,” Samadi added.

“While I was in the ‘Death Corridor,’ I heard from another prisoner that the executions had also started in Evin prison. He told me: ‘Tell the others that they are executing everyone,” Samadi said.

“When I saw Nasserian, I protested why I am still here. He told me: ‘Be thankful that you’re still breathing. I will personally throw the noose around your neck.”

According to Samadi Hamid, Noury took prisoners for execution. Prisoners in Gohardasht were executed in a large warehouse, later became known as the “Death Hall.”

“I told Hamid Abbasi, ‘You didn’t read my name. Look at the list.’ My name wasn’t on it. I was later taken to solitary confinement.”

“Almost all the cells were occupied. Some of the prisoners were executed that night, and others received their death sentences. I told other prisoners the name of those who were executed, and I witnessed it. They also shared what they saw with me,” Samadi said.

“Gholamreza Kiakajouri was in the cell that was across mine. He said, ‘I can’t live without the rest of the prisoners.’ Manouchehr Bozorgbashar was in the adjacent cell. He said, ‘Today, I will go and take a stand,’” he said. “They were later executed on August 16,” Samadi said.

“On August 6, I was taken to the Death Commission. I saw Davoud Lashgari constantly visit the prisoners and ask whether they had met the Commission or not. He wanted to make sure no one had been brought here by mistake,” Samadi said. “I realized that my death warrant had remained on Raisi’s desk.”

Samdi was later transferred to Ward 2, where several prisoners were kept. “I communicated with the adjacent cells and the cells on the second floor,” he said. “Almost everyone knew about the executions. What they didn’t know was when their turn would come.”

“I have a list of 377 names of those executed. Including 177 in Gohardasht and others in Gorgan and Khuzestan,” he said.

“On August 8, Nasserian, Noury, and several other guards came to my cell,” Samdi said. “Nasserian asked, ‘Will you do an interview?’ Since I didn’t know this was one of the conditions of the court, I said that I hadn’t thought about it. He said, ‘What were you thinking about.’ I said, ‘Freedom. There are only three years left from my sentence,’” Samadi said. “As he spoke, I realized that this is one of the conditions for execution. My response angered him. He and Hamid Abbasi wrote down my name.”

“I was again taken to the Death Commission on August 9,” Samadi recalled. There, Samadi pretends that he has a headache. “They continued to talk, and then Pourmohammadi asked me to do an interview and sent me back to the Death Corridor. There, every 30-40 minutes, Hamid Abbasi would come and read a list of names and take them to the end of the Death Corridor,” Samadi said.

On August 13, Samadi once again faced the Death Commission. “Nayyeri read my name. He had two pieces of paper in his hand and looked at them every time I answered one of his questions. He asked whether I would do an interview, I said yes,” Samadi said.

Samadi tells them that he was 14 years old when arrested, and if he had killed anyone, he would receive the death penalty based on the regime’s laws. Nasserian rejects Samadi’s words, saying they would not count as an interview.

“Nayyeri said, ‘Do you know anyone in the ward who is standing on his support for the MEK.’ I pointed at Nasserian, Lashgari, and Abbasi and said, ‘These people are sick. They want to do something to me.’”

In Monday's session, Akbar Samadi, a former political prisoner who was arrested at the age of 14 for supporting the PMOI/MEK & sentenced to 10 years in prison, testifies on the atrocities in the regime's horrific prisons.#1988Massacre#ProsecuteRaisiNOW

While at the Death Corridor, Samadi witnesses a rather strange incident.

“I saw a person come out of the room and go to the Death Commission’s office. There was a commotion, and they started arguing. They didn’t even realize that there was a prisoner in their presence,” Samadi said.

The person tells them to start walking. “We moved and turned toward the Death Corridor that led to the Death Hall. We thought we were being taken for execution. But then they told us to turn and led us to the entrance of the kitchens. There were many prisoners sitting tightly next to each other. We passed through them. I looked at them through the blindfold, and I think they were Marxist prisoners, though I can’t remember any of them.”

“I told the others, I think they’ve started the execution of Marxist prisoners,” Samadi added.

The prosecutor then asked, how did you recognize Hamid Abbasi (Noury)?

“I had previously seen Hamid Abbasi. When I was in the Death Corridor, whenever someone would approach me, I would look at their shoes. When I felt they couldn’t see me, I would raise my head and completely see the individual and memorize a specific characteristic about that individual—for example, the type of shoe or the color of their pants. I could fully identify an individual when they were approaching or distancing,” Samadi replied.

“On August 3, when I was in the Death Corridor, I was sitting around the middle, and the prisoners whose names were read out would line up right in front of me. I would clearly see Hamid Abbasi when he was busy reading out names and lining the prisoners up. I have no doubt it was him. On August 3, I saw Hamid Abbasi several times as he was reading out names, and those prisoners were taken to the Death Hall,” he added.

Several other political prisoners and family members of victims spoke to the press about the regime’s crimes outside the District Court of Durres.

On Monday, the MEK supporters and the families of victims also held a protest rally in Sweden, where the trial of Hamid Noury began. They paid tribute to the martyrs of the 1988 massacre and called for the prosecution of all the regime officials involved in these crimes, including ّthe current Iran regime’s president Ebrahim Raisi and Supreme Leader Ali Khamenei.  They also hailed the martyrs of the major Iran protests, which erupted in November 2019.