Iran: Bipartisan Group of Prominent U.S. Figures Support the NCRI and the MEK

On the eve of next Friday’s “Free Iran Global Summit”, a bipartisan group of prominent U.S. figures have declared their support for the Iranian Resistance – the Mojahedin-e-Khalq (MEK/PMOI) and the National Council of Resistance of Iran (NCRI). “ There is a beacon of hope in this dark landscape. The one organization that has done more than any other entity, including governments, to free Iranian citizens from tyranny and the world from fundamentalist-inspired terrorism is the National Council of Resistance of Iran (NCRI). The NCRI strives relentlessly to ensure that hope for democracy and an end to injustice remains alive in,” they wrote in a statement.

The bipartisan group also asked other countries to send experts to Ashraf 3, the residence of members of the MEK in Albania. “We recommend that countries that have been victimized by Iranian-government sponsored terrorism, including the US and its European allies, send teams of experts to study the evidence at Ashraf 3 while organizing their own evidence for eventual use in international tribunal proceedings,” reads the statement.

The statement, signed by at least 30 American figures, will be presented at the Free Iran Global Summit on Friday, July 17, 2020.

It should be noted that a bipartisan majority in the US House of Representatives recently co-sponsored H.Res.374, which, while supporting the Iranian people and the Resistance, condemns the mullahs’ regime for its terrorist activities in Europe, in particular for the terrorist attempt against the “Free Iran 2018 – the Alternative’ gathering in Paris.“

The full text of the statement is as follows:

The days of religious fundamentalists controlling Iran are numbered. These clerics have remained in power since 1979 by brutalizing all who do not embrace their extremist constitution, who demand to think and speak for themselves, including about matters of religious faith, and who desire for their fellow Iranians a future of dignity and freedom. The regime has denied its citizens that future, and the rights that, for every human being, are inalienable.

Not just the rights, but the lives of Iran’s citizens are being sacrificed for the empowerment of a dysfunctional and rapacious theocracy.  Just as it did in suppressing with lethal force innocent citizens expressing political dissent in 1981, 1988, 1999 and 2009, the regime has answered the country-wide demonstrations and protests that have taken place since December 2017 with bullets and prison cells.  Every act of defiance and protest is a courageous call for liberty, and a rebuke to an illegitimate and isolated regime.

Nor have the regime’s atrocities been limited to the Iranian citizens trapped within the country’s borders. Iran has also become a staging area for hostile operations directed against governments throughout the Middle East and beyond. Every single year since 1984, Iran has been the leading state sponsor of international terrorism. The list of Iranian-sponsored terrorist activities continues to grow across Asia, Europe, and North America. As we now know, the Iranian Ministry of Intelligence and Security (MOIS) attempt to bomb an anti-Iranian government demonstration near Paris in 2018 was prevented by the joint law enforcement efforts of three European nations. In the space of a few months, MOIS actions were interdicted by authorities in Denmark, Belgium, France, Germany, Austria, and Albania. In 2019, Iran’s Islamic Revolutionary Guards Corps (IRGC) was designated as a Foreign Terrorist Organization (FTO) by the United States Government.

The designation was long overdue. The IRGC was responsible for the Khobar Towers bombing in Saudi Arabia in 1996 which killed 19 and injured 500 American service-members. As documented by the U.S. Department of Defense, the IRGC was directly involved in 608 American service-members’ deaths in Iraq since 2003. Hezbollah, under the supervision of an IRGC brigadier who later emerged as President Rouhani’s Defense Minister, conducted the 1983 Beirut Barracks Bombings which resulted in deaths of 241 American and 58 French service-members.

Evidence implicates Iran’s top leaders in the most destructive terror bombings in Argentina’s history, in 1992 and 1994. The regime has conducted assassinations of its critics in the US, Germany, France, Switzerland, the Netherlands, Turkey, Austria, and Sweden. Commencing in 2009, Tehran’s client government in Iraq and Iranian-backed proxy militias were responsible for three ground assaults on Camp Ashraf and multiple rocket attacks on Camp Liberty where the defenseless men and women of the Iranian opposition organization Mujahedin-e Khalq (MeK) were located, awaiting UN processing as refugees, and supposedly under the protection of the Iraqi government. The most deadly event was the September 2013 Ashraf massacre where 51 unarmed dissidents were murdered and seven were kidnapped, never to be heard from again. Analysis of the weapons, methods, and precision of strikes confirmed IRGC involvement.

Unlike many governments, the leading figures in this evil regime have been in positions of authority for years, decades even. The senior officials at whose direction police murder citizens on the streets and wrongfully arrest innocent people, prison officials torture and execute citizens whose only crime has been expressing the desire for political and religious freedom, and judges enable government tyranny and twist the rule of law, must now be held accountable. These criminals have abused the privileges of sovereignty to achieve impunity for their crimes against humanity for forty-three years.

There is a beacon of hope in this dark landscape. The one organization that has done more than any other entity, including governments, to free Iranian citizens from tyranny and the world from fundamentalist-inspired terrorism is the National Council of Resistance of Iran (NCRI). The NCRI strives relentlessly to ensure that hope for democracy and an end to injustice remains alive in

Iran. Additionally, with continual media outreach, publications, and meetings, it sustains international attention on the ongoing assault against humanity.

Albert Einstein, who would have been lost to the Holocaust had he not resettled in America in the 1930s, stated, “The world is a dangerous place to live, not because of the people who are evil, but because of the people who do not do anything about it.” We call upon governments that live by democratic principles to act now on a coordinated initiative to bring accountability to individuals bearing responsibility for gross human rights abuses.

The NCRI and its affiliate organization, the MeK, have endured unspeakable horrors from the Iranian regime. The NCRI and MeK have kept very thorough documentation of the atrocities committed against themselves and the Iranian people. MeK’s Ashraf 3 museum in Albania has compiled a remarkable display and repository of evidence, staffed by victims bearing personal witness to the depraved modalities of regime torture. The MeK’s documentation is securely backed up in other countries.

While the US and other governments contemplate policies to deter and contain Iranian threats and aggression, they can and must act to bring accountability to people with the blood of so many Iranians on their hands. Ample precedent exists that leaders cannot claim sovereign immunity for their crimes against humanity. We recommend that countries that have been victimized by Iranian-government sponsored terrorism, including the US and its European allies, send teams of experts to study the evidence at Ashraf 3 while organizing their own evidence for eventual use in international tribunal proceedings.

Justice delayed is justice denied. Einstein’s admonition requires action. So do the principles by which we define ourselves as Americans. By signaling that a day of reckoning awaits the Tehran regime’s most brutal actors, and that these men will never again walk free in the world, we will be sending the most powerful signal of hope and solidarity to the Iranian people, and to all who espouse freedom and justice.

Hon. Linda Chavez – Former Assistant to the President for Public Liaison; Chairman of the Center for Equal Opportunity 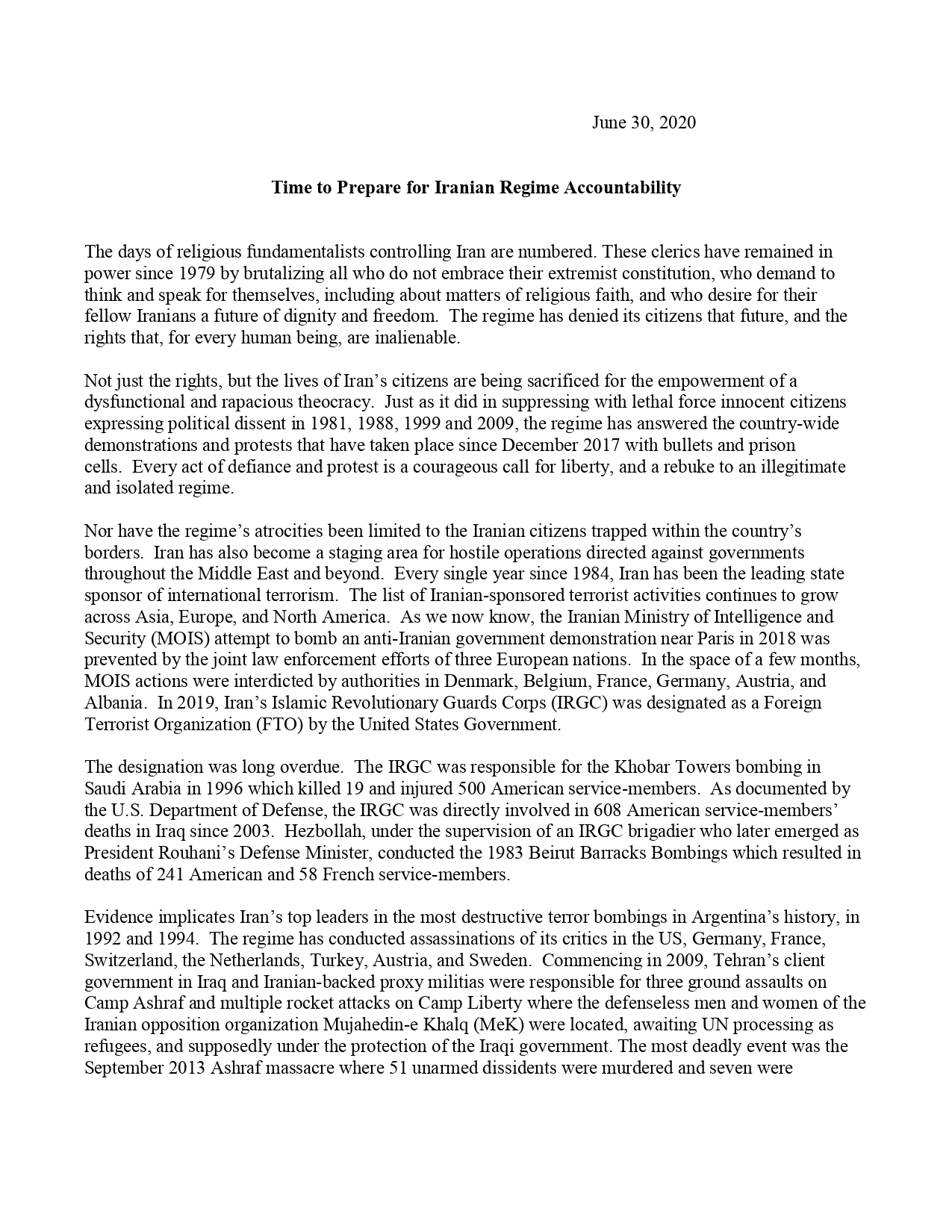 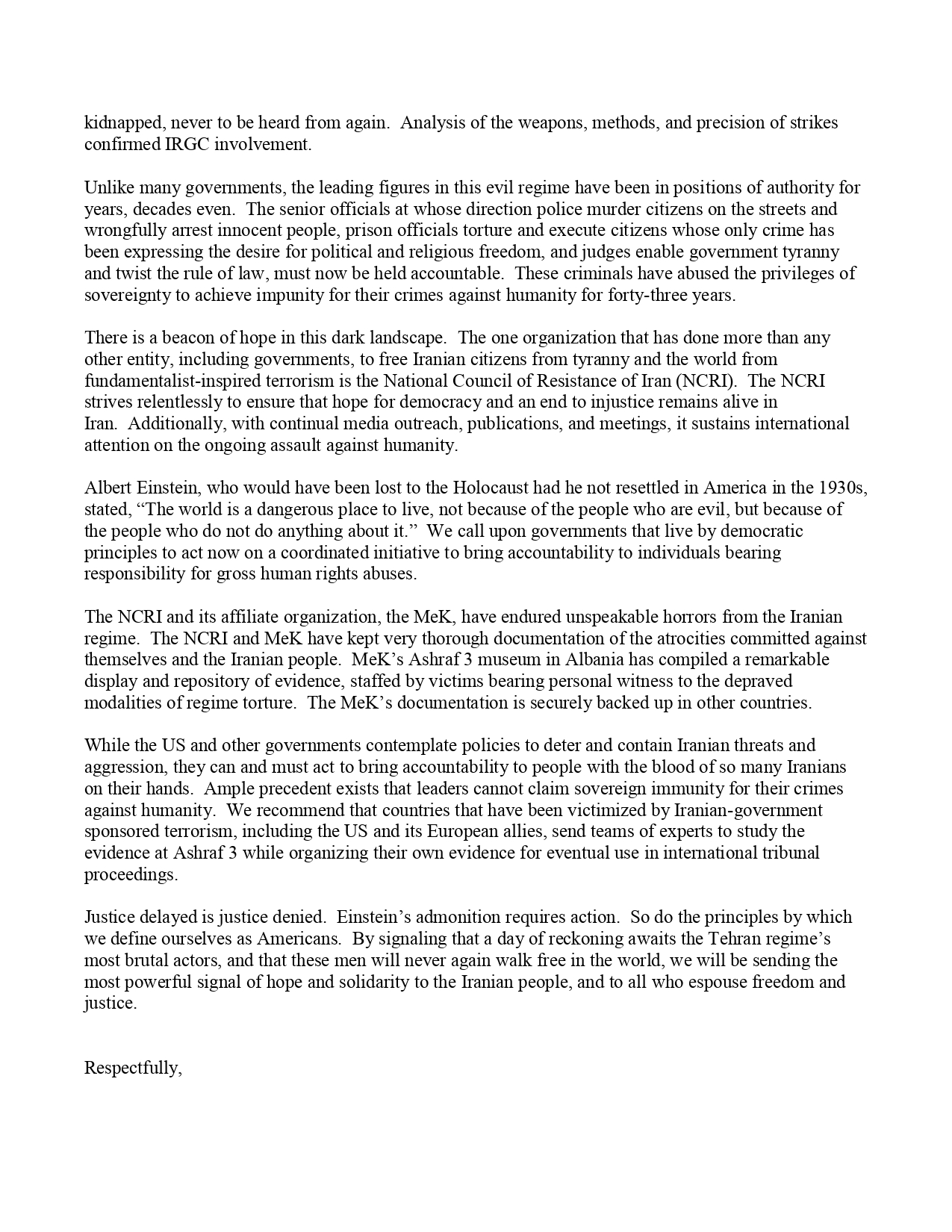 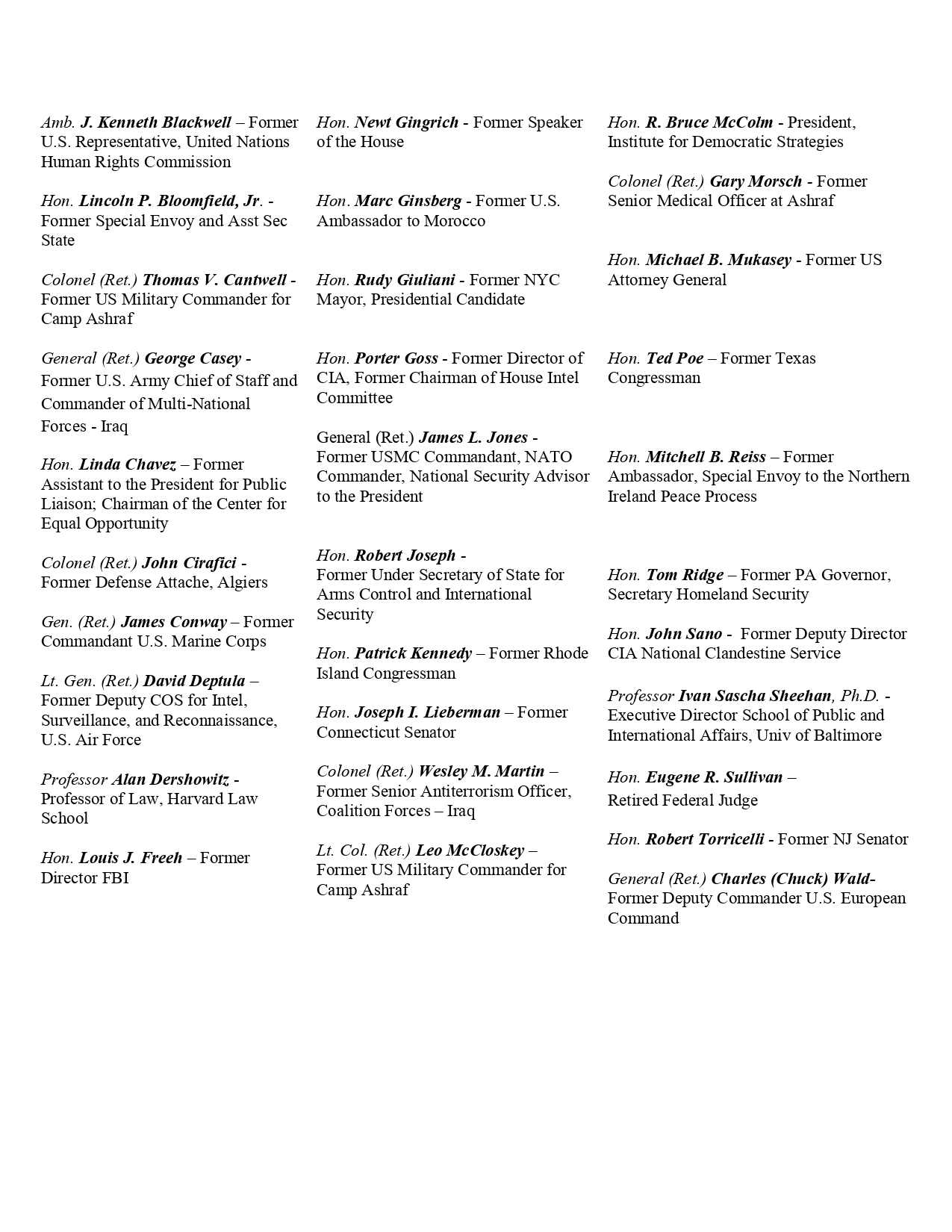