The U.S. House Majority Stands With Iran’s People and Resistance 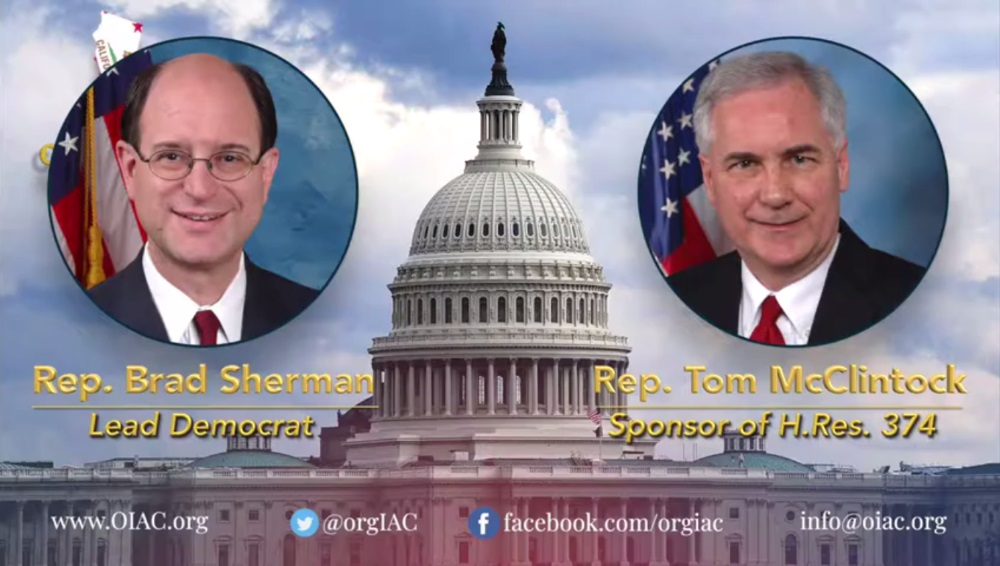 The Organization of the Iranian American Communities (OIAC), held a virtual conference, attended by senior U.S. lawmakers and personalities, unveiling House Resolution 374 to counter Iranian regime’s threats, U.S policy, and necessary measures to be taken to support the Iranian people in their quest for freedom.  This resolution is being unveiled while the Iranian society grapples with the various crisis, including the COVID-19 pandemic, economic hardship, and particularly after the nationwide Iran protests in 2019 and the regime’s brutality which resulted in over 1500 deaths. Iran’s society has become more restive, awaiting a spark to explode and overthrow this regime.

Res. 374 enjoys the bipartisan support of a majority of members of the U.S. House of Representatives from 41 states and 12 committees including the House Committees of Foreign Relations, Armed Services, Homeland Security, Appropriations, and Select Committee on Intelligence. H. Res. 374 has been brought to the attention of Mike Pompeo, U.S. Secretary of State, this week with the names of 220 co-sponsors and a policy suggestion that the U.S. administration should take into account.

This resolution is a unique and significant initiative for various reasons. For the first time the House is offering a solution to counter threats of the Iranian regime, yet this solution relies on the Iranian people and requires no boots on the ground, or appropriation of money by the U.S. or other countries.  The Iranian resistance, particularly the NCRI and MEK, have gained momentum to overthrow this regime, therefore they have become the Iranian regime’s main target of the Iranian regime’s terrorism, via the regime’s so-called “diplomats” and “diplomatic centers.”  In addition, the MEK supporters in Iran are being systematically oppressed.

In a message to this conference, Mrs. Maryam Rajavi, the president-elect of the National Council of Resistance of Iran said: “This Resolution, co-sponsored by a bipartisan majority of members of Congress, reflects the American people’s support for Iranian people’s desire for a free Iran, a republic based on people’s free vote, separation of religion and state, gender equality, respect for the rights of ethnic groups, and a non-nuclear Iran.”

Maryam Rajavi: This Resolution, co-sponsored by a bipartisan majority of members of Congress, reflects the American people’s support for #Iranian people’s desire for a free #Iran, a republic based on people’s free vote, separation of religion and state, gender equality… @OIAC pic.twitter.com/spC64yHMJj

Mrs. Rajavi said that she is, “delighted that a majority of lawmakers have condemned the terrorist activities of the mullahs’ regime through its so-called diplomatic missions and terrorist-diplomats.  The Iranian Resistance commends the call to hold the mullahs accountable and to adopt decisive measures, such as the closure of the regime’s centers of espionage and terror in Europe, including in Albania.”

Congressman Tom McClintock (R-CA) sponsor of this resolution said: “Regime’s destabilizing behavior has continued, and acts of terrorism will be addressed. Iranian Resistance has been a target of Iranian terrorism. We condemn these terror acts.”

#Iran: The Bipartisan Majority Support for H.Res. 374 was presented at an event hosted by the @OIAC, in which several lawmakers delivered speeches. Rep. Tom McClintock, sponsor of the resolution addressed the event. #FreeIran2020 #Iranian pic.twitter.com/gmwqLvLBcu

Congressman Brad Sherman (D-CA), co-sponsor of the H. Res. 374. told the event: “Now more than ever, we stand with Iranian people for a non-nuclear, secular and democratic Iran. Iran’s violent crackdown on peaceful protesters and terror acts abroad must be addressed. We must work hard to Free Iran. Prosperous non-nuclear Iran.”

Congresswoman Sheila Jackson Lee (D-TX) was also among the speakers of today’s congressional briefing. She said: “I am here supporting you. The freedom-loving people and H.Res.374 that condemn terrorism in Iran and says to the people who want democracy, we are standing with you. We are against the regime that promotes terrorism and terrorizes its people.”

This resolution also comes when the United Nations Secretary-General Antonio Guterres, in his report to the Security Council, confirmed that the missiles used in several attacks on oil facilities and an international airport in Saudi Arabia were of “Iranian origin.”

Congressman Joe Wilson (R-GA) also addressed the congressional briefing. He told the Iranian Resistance members and supporter, “You have sacrificed your family and friends for freedom in Iran. You are an inspiration for us. We support you.”

Res. 374 and signed by the Majority of the U.S. House of Representative  states:

1- “condemns past and present Iranian state-sponsored terrorist attacks against United States citizens and officials, as well as Iranian dissidents, including the Iranian regime’s terror plot against the ‘Free Iran 2018 – the Alternative’ gathering in Paris.”

2- “calls on relevant United States Government agencies to work with European allies, including those in the Balkans, where Iran has expanded its presence, to hold Iran accountable for breaching diplomatic privileges, and to call on nations to prevent the malign activities of the Iranian regime’s diplomatic missions, with the goal of closing them down, including the Iranian embassy in Albania.”

3- “Stands with the people of Iran who are continuing to hold legitimate and peaceful protests against an oppressive and corrupt regime.”

4- “recognizes the rights of the Iranian people and their struggle to establish a democratic, secular, and non-nuclear republic of Iran.