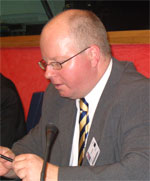 NCRI – Mr. Morten Hoglund, member of the Norwegian Parliament’s Foreign Affairs Committee expressed his concern over the terrorist bombing of a commuter bus in Iraq which carried workers to Ashraf City, where thousands of PMOI members reside. The following is the text of his letter to the Iraqi Foreign Minister:

As you might be aware a powerful roadside bomb which was set by the Iranian regime’s agents, went off early morning in Khalis killing 13 workers and wounding some 15 others. Aboard the bus, were some 44 workers who commuted to Ashraf city everyday. They work for the Iranian Mojahedin.

I have no doubt in my mind that the bomb or at least its engineering know how came from the mullahs’ regime in Tehran. The Iranian Foreign Minister was in Iraq only two days earlier which make the regime in Iran the prime suspect.

Since the People’s Mojahedin Organization of Iran is well respected by the local population there, and to me they are the prime target of the mullahs’ regime terrorist attacks, they should not only be well protected by the Multi-National Forces in Iraq but with the new government in place their status as political refugees should be recognized by Mr. Noori Al-Maliki’s administration. This would send a strong signal to the clerical regime in Iran to back off

Therefore, it is time that the Iraqi government grants PMOI personnel, who have been in Iraq for the past 20 years, political asylum. This would certainly stop the Iranian regime’s terrorist attacks on the Mojahedin in future.