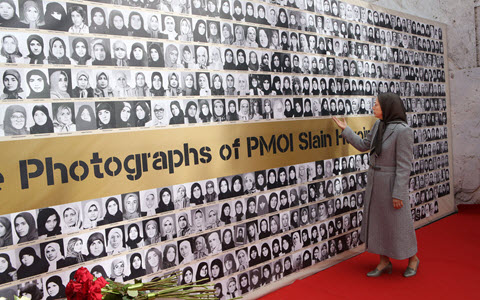 Although the Iranian regime oppresses all those who challenge their rule, one organization has been the target of decades of efforts to suppress and undermine their voice in support of a free Iran. They are the People’s Mujahedin Organization of Iran (PMOI/MEK).

Fars agency, with alleged affiliations with the Islamic Revolutionary Guard Corps (IRGC), has voiced concerns of the regime over what they see as a dangerous turn of events, now that Camp Liberty’s residents have been relocated to Europe. Fars reported on June 20 that the move was a reminder of (MEK’s) declaring war against the regime. the news agency adds, “The group’s (MEK’s) increased activities and their efforts for creating chaos and making a creeping coup was so intense over a period of time that many thought it was over for the regime on July 9, 1999. Their coordination was even further revealed during the 2009 uprising.”

The regime controls the press in Iran, but with satellite television, the opposition is able to shed light on the regime’s activities and inform the Iranian people of such things as exposing of bankrupt institutions belonging to state entities, like the IRGC. “Some satellite channels linked to MEK have released a clip showing that Samen institution has gone bankrupt, scaring investors into rushing to Samen Bank branches,” said a regime official.

Recently, families with loved ones killed in the efforts of various families to receive for their loved ones killed in the 1988 massacre have sought justice. However, supreme leader Ali Khamenei has spoken out against this movement, which focuses on justice for those MEK members executed. Khamenei stated, “We’ve recently been hearing some tribunes attacking regime’s records during the 80’s. I recommend those who are thoughtful not to mistake executioners for martyrs when judging the 80s events. Iranian people were oppressed at the time. Terrorists, MEK, their supporters and those who raised them and constantly blew them persecuted the Iranian people. They did bad things. The Iranian people were forced to take a defensive position.”

After Khamenei’s speech, a rush of state-run media outlets attacked and made false accusations against the MEK. Things escalated following Khamenei’s fire-at-will order. Supporters of the Iranian regime called MEK the killers, and claimed that the order from Khomeini was meant to protect the country by killing anyone, including MEK members and supporters, who still stood their ground and supported the MEK.

In the Shiraz Friday prayer show, Assadollah Imani said, “If MEK had not been repressed in 1988, you were faced with such plights everyday over the past 20 years. Khomeini knew well how to deal with MEK.”

The attacks aren’t limited to the MEK. The Friday Prayer Imam Alamolhoda in Mashhad attacked Rouhani for the increased popularity of the MEK and the movement seeking justice for victims of the 1988 massacre. “Today, we are faced with such a problem. To gain power and push away their rivals, they defend (MEK) so much that the supreme leader is forced to shout not to mistake executioner for martyr. Those claiming to run the regime are actually defending the MEK.” he said.

The release of the Hassanali Montazeri audio tape detailing the roles of the death commissions in the 1988 massacre has sent shockwaves through Iran.

The Judiciary’s Mizan news agency reported, “The audio file was released right when counter-revolutionary elements and media had prepared their same old programs against the Iranian regime to mark the anniversary of the execution of MEK members. Besides, MEK was holding a gathering in Paris at the time.”

Another gathering is being held in Paris on July 1st. There, the opposition will lay out their case for a Free Iran, one that doesn’t include the fundamentalism and repression of the regime. Speakers from various leadership bodies in the international community will show their support for the National Council of Resistance of Iran (NCRI), a coalition of opposition movements determined to create a peaceful regime change.

The President-elect of the NCRI, Maryam Rajavi, has called for the formation of the movement to obtain justice for the victims of the 1988 massacre. “This is a very important document attesting to several basic realities. First, the audio clip contains explicit confessions by those responsible for the massacre regarding their participation in an ongoing genocide. It shows that Khomeini and his entourage contravened even their own procedures and routines and were directly involved in the massacre. It also indicates that the religious tyranny solidified the foundations of the next repugnant Velayat-e-Faqih (absolute clerical rule) as a result of this genocide.”

Khomeini feared the MEK’s deep roots and strength in Iranian society. In a letter to Montazeri, Khomeini explained the reason for the latter’s ouster as heir to the supreme leader, “It has now become clear that after me, you will give up this country and the dear Islamic revolution of Iran’s Muslim nation to liberals and through them to the (Mojahedin).”

The increasing popularity of the MEK is a dangerous development, according to the regime. And now, the NCRI and their supporters have called on the international community to support the people of Iran in their demand for the prosecution of the Iranian regime’s leaders.

Human rights advocates and international bodies have continued to report on Iran’s record of repression. The United Nations and the UN Security Council have been called upon to adopt political and legal arrangements for the international prosecution of leaders of this regime on the charge of committing crimes against humanity.

A necessary step toward ending mass executions within Iran, such as the recent execution of 25 Sunni prisoners, would be a formal international condemnation of the 1988 massacre, and would help the movement to obtain justice by the supporters of the Iranian Resistance, holding Khamenei and other regime leaders accountable for crimes against humanity.

Previous articleMassive Campaign of Youths and Supporters of PMOI and Iranian Resistance Throughout Iran in Support of the Resistance Grand Gathering in Paris
Next articleIran: Vehicle Of “Hijab Discoverer” Is Seized