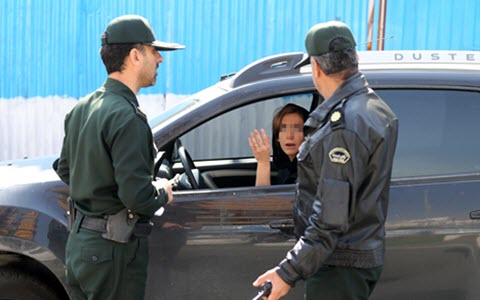 NCRI – On Tuesday June 27, the Iranian regime’s prosecutor in Mazandaran province (northern Iran), announced “serious dealing” with those who “discover hijab” (unveiling) in vehicles and the seizure of their vehicle.

The regime’s prosecutor, Assadollah Ja’fari said: “For those who are trying to discover the veil, a judicial case is formed.

“Considering the arrival of the hot season, seasonal holidays, and the increase of travel and use of the seashore, and also the necessity of observance of Islamic law, in the implementation of Article 638 of the Islamic Penal Code by prosecutors and the heads of the jurisdictions, for those who attempt to discover the veil as forbidden action in public, a judicial case will be formed,” he added.

Ja’fari also announced seizure of the vehicles whose passengers do not observe veiling and said: “Personal or public vehicles, motorcycles, motor boats, jet skis and other motor vehicles whose passengers try to discover the veiling will also be seized and transferred to a parking lot and storage area. The accused (i.e. driver of the vehicle) will be dealt with according to the law.”

The regime’s prosecutor general in Mazandaran continued: “Considering the importance of this issue, the prosecutors and head of the jurisdictions will personally monitor the cases related to veiling discovery.”

He has also announced two days ago in a news conference “serious dealing with norm-breakers” in this province.

About a month ago, the Iranian regime’s traffic police chief also announced that “violators” in cars and “discovering hijab or bad hijab” by the drivers or occupants is considered as true instances of “criminal offenses.” Simultaneously, Taghi Mehri, the traffic police chief announced receiving reports about traffic police dealing with “fast breakers” in the holy month of Ramadan and “hijab discovery” inside cars in different provinces.

Tehran’s prosecutor emphasized: “In cases where the focal point of the enemy’s planning and concentration is in vogue of unchastity, confrontational action or, as a well-known saying says, colonel’s action is necessary.”

The Iranian regime despite the growing repression in these years and implementing rigid provisions of the so-called hijab and the use of police for ethical police and security and the advent of the so-called guidance patrol has not yet been able to impose a mandatory veil on Iranian women and girls as it wants.