Iran: Solidarity with uprising in Tabriz against mullahs’ regime 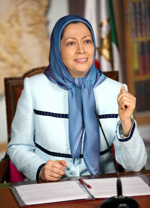 NCRI – Students in Ardabil and Maragheh universities in northwest Iran expressed their solidarity with people of Tabriz in their mass uprising against the clerical regime over the publication of an insulting cartoon in a state-run daily last week.

Solidarity with people of Tabriz comes as protests in the city and many other places in Azeri speaking provinces in northwest Iran continues. Iranians across the country have condemned brutal attacks against people of Tabriz which has led to a number dead and injuries.

Protestors have been chanting slogans against the leaders of the clerical regime and attacked government buildings in Tabriz, Orumieh, Naqadeh and other places.

Mrs. Maryam Rajavi, the Iranian Resistance’s President-elect, hailed the popular uprising in East and West Azarbaijan and Zanjan provinces and described it as an expression of the nation’s will for the overthrow of the clerical regime in Tehran. She called upon all Iranian people, specially the youth, to join the heroic popular uprising of the Azarbaijani people.