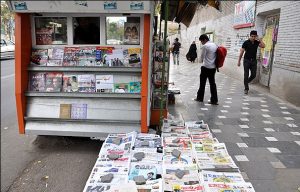 The Iranian Resistance, based on reports obtained by the MEK’s network from inside Iran, exposed the regime’s secret nuclear activities in 2002 for the first time. This revelation along with the subsequent revelations by the National Council of Resistance of Iran (NCRI) triggered inspections by the International Atomic Energy Agency (IAEA) and ensuing measures by the United Nations Security Council. Thus, the mullahs went under further international pressure.

In this regard, the state-run Mardom Salari on Saturday wrote: “After months of struggles, the United States activated the trigger mechanism at 2 a.m. GMT on September 21. The U.S. claimed that six previous Security Council resolutions against Iran, which had been repealed during the 2015 nuclear agreement and by the Resolution 2231, will be reimposed. Resolutions 1696-1737-1747-1805-1835-1929 impose a range of sanctions related to uranium enrichment, terrorism and human rights. All these resolutions were issued between 2006 and 2010 following the treacherous espionage of the MEK against [the regime].”

Mardom Salari also referred to the regime’s failed policy of “looking to the East” to find a breakthrough from its economic suffocation. “In fact, the U.S. is the world’s leading economy and has a vast dominance over the economies of the EU, China, and Russia. Thus, the U.S. knows that despite all their resistance against the snapback mechanism, the EU, China, and Russia are dependent on the U.S. economy. The U.S. understands that, in the final analysis, the Europeans will not sacrifice the vast interests they have in the U.S. economy for their interests with Iran.”

The Iranian Resistance has been making all possible efforts to raise public awareness against the regime’s terrorism and human rights violations. These endeavors have created bipartisan support for the Iranian people’s struggle for freedom on both sides of the Atlantic. The NCRI’s recent virtual conference on September 18 was a testament to the NCRI’s ongoing efforts to hold the Iranian regime to account for its belligerence and human rights violations.

While referring to the NCRI’s conference, held on the eve of the activation of the snapback mechanism, Mardom Salari wrote: “On the other hand, let us remember that the current policies of the White House, the Senate, and the House of Representatives are heavily influenced by the lobbies and the MEK’s daily propaganda. Take the MEK’s virtual event, held on the eve of the U.S. activating the snapback mechanism. This conference [connected] both sides of the Atlantic and was attended by 9 Senators and 20 members of the U.S. House of Representatives, as well as figures such as Rudy Giuliani. These Senators were from both the Republican Party of Trump and Joe Biden’s Democrats. Even Senator [Robert] Menendez, who is a serious critic of Donald Trump, when it comes to the MEK and their [anti-regime] policies, joined hawkish Senators such as Ted Cruz and Marco Rubio. Menendez not only supported increasing pressure and sanctions on Iran [regime] but supported [opposition] leader Maryam Rajavi.”

Following the nationwide Iran protests in November 2019, which rattled the regime’s foundations, the mullahs have increased their demonization campaign against the MEK. Therefore, as one of the regime’s officials said, the mullahs have tried talking about supporters of the deposed monarchy as a “distraction” to prevent people from joining or supporting the main opposition. Making claims about supposed supporters of the monarchy inside Iran and comparing them to the MEK by the regime’s officials and media is an orchestrated plot by the regime’s Ministry of Intelligence and Security (MOIS) to divert the attention of the Iranian people and the international community from the most viable alternative to the Iranian regime.

In this regard, Mardom Salari acknowledged: “In their statements and speeches, these Senators and Representatives even deny Reza Pahlavi and the monarchy in order to monolithically show the MEK as the alternative to the Islamic Republic.”

As the NCRI’s president-elect Mrs. Maryam Rajavi said during her speech at the Free Iran Global Summit: “We pledged to overthrow the regime, take back Iran and restore all the violated and plundered rights of the people of Iran. As I have reiterated time and again, we have not come to gain something for ourselves; we have come to sacrifice and pay the requisite price. We are determined to restore freedom and people’s sovereignty in Iran, and this will happen.”