Written by The Editorial Board
1st October 2013 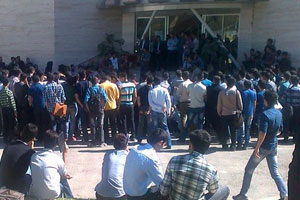 NCRI – Iranian students have staged protests at suppression, lack of facilities, crumbling buildings and soaring costs at universities in Iran.

As the new academic year begins, hundreds of students at the Industrial University of Orumieh demonstrated at the ‘oppressive atmosphere’ and demanded the resignation of the Dean.

Students at Tehran University’s technical college protested against the lack of repairs to buildings, while those at Bojnourd University expressed anger at an increase in tuition fees, food prices, the cost of accommodation and lack of transport to the city center.

One student said: “Despite the increase in food expenses, the food offered in the cafeteria is of very low quality.

Students at Shahrekord Private University also drew up a list of all the names of the university students who have been martyred since the 1979 revolution. The list included many members and sympathizers of the People’s Mojahedin Organization of Iran (PMOI/MEK)

And at Sahand Tabriz University, students scrawled anti-government graffiti on white boards and bulletin boards, reading ‘Down with the dictator’ and ‘Down with the Supreme Leader’.