Iran: The Alliance of the Clerical Regime and Monarchists Against the Pro-Democracy Movement

As the clerical regime in Iran is facing the most challenging crisis of its life and is fighting for its survival, it sees no way out of the existential crisis, but either to destroy or tarnish the image of its democratic alternative, the National Council of Resistance of Iran (NCRI), and the main Iranian opposition movement People’s Mojahedin Organization of Iran (PMOI-MEK).

The Iranian people’s uprising at the beginning of January 2018, and November 2019 heralded a new era in Iran both for the ruling regime and the resistance. The MEK resistance units played a significant role in organizing, fomenting, and directing the uprising’s demands for regime change. The regime’s Supreme Leader, Ali Khamenei publicly blamed the MEK for its key role.

A bankrupt economy, high rate of unemployment, poverty, regional and international isolation of the regime, growing crises within the regime, and explosive situation of the society combined with the growing tendency of the youth to support the MEK have forced the regime to exploit all its resources to discredit its democratic opposition as the only mean to survive. In alliance with the clerical regime, the monarchists, and supporters of the deposed Shah outside of Iran are also using all their resources to help the regime and discredit the democratic opposition by spreading fake news and lobbying for the regime.

Ingrid Betancourt former Colombian presidential candidate elaborated on this issue in her speech on July 19, 2020, in the annual gathering of Free Iran Global Summit. 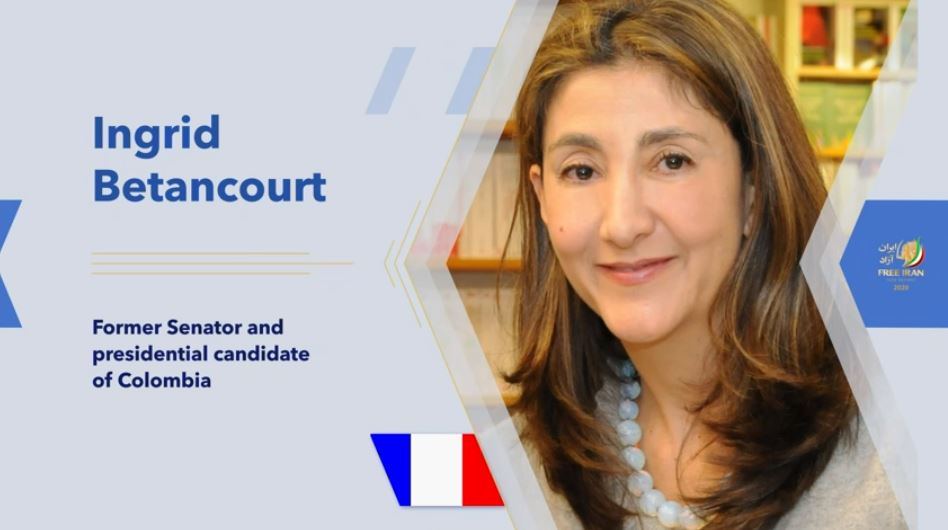 The following is the text of her full speech:

In the anti-regime protests in January this year, people were chanting, “Down with dictators, be it the Shah or the Supreme Leader.” It could seem odd for outsiders to see Iranians bringing back today from the ashes of history the name of the Shah, simultaneously with the name of the leader of the today’s dictatorship. Surprisingly, more than a historical parallel, they are referring to an ongoing alliance. In the history of Iran, in the 1953 coup d’état against Prime Minister Mossadegh, a liberal reformist who was opening a Democratic path to Iranians, the religious leader at the time, Ayatollah Kashani acted in alliance with the Shah to bring Mossadegh down, accusing him of being a Communist and putting an end to this early Iranian Spring. Today, the mullahs are in power but the monarchists, despite all their enmity with this regime, prefer this regime to the free and democratic option that Iranians in the streets are claiming for.

Interestingly enough, recently Ardeshir Zahedi, a former Iranian minister and most of all an ambassador to the United States from the Shah era attacked Washington for the military operation against Qasem Soleimani. He said in an interview that the United States were the real terrorists. And he added, “I have always been and will always be proud of Qasem Soleimani. He was the one who sacrificed his life for his country, unlike those who sell themselves for money.”

We all know that Qasem Soleimani was considered by Khamenei himself to be his preferred one, his successor, the one who was to take over the command in Iran after him. And we also know that Qasem Soleimani has been accused for executing thousands of Iranians, working for a regime that has proven to be corrupt to the bone with wealthy leaders plundering on the country’s resources while their fellow citizens face hunger and deprivation. So, what was Ardeshir Zahedi talking about as a follower of the Shah? Who was he trying to fool? In fact, what people in the street in Iran are telling us is that they haven’t been fooled at all. That they understand better than anyone who these two forces and how these two forces play together in order to continue exploiting and robbing the country to their personal benefit.

The objective alliance between theocrats and monarchists is also visible in another particular issue, in the way they both attack the Iranian democratic forces. Those that are uniting all protestors inside Iran and gathering international support outside its borders, those are for both of them the real enemy, namely the NCRI and especially the MEK, have been their common targets because they can see how people in Iran are recognizing their leadership as a unifying organized force to defeat the regime and open finally the way to democracy. For years, the mullahs’ regime has campaigned to portray the MEK as a terrorist organization and it has failed. They all have failed. Every single time when their accusations have been brought to a court of justice, an independent judge has made a point of honor, be it the States, in Britain, in Europe, to clean the name of the Iranian resistance and of its leaders from all the dirt the regime tried to pile up against them.

Today, they want to divide protestors inside Iran and within the resistance with the weird allegation that the MEK people in Ashraf are prisoners of their leaders unable to make their own decisions. This is precisely what the tyrannical regime of the mullahs is guilty of. The regime holds the Iranian population as its prisoners, trying to brainwash them with lies and threats and even using the name of God to do evil. That is the reason for millions of Iranians to be protesting as we speak inside Iran and abroad. It’s a well-known strategy to accuse your accusers of what you’re guilty of, turning tables, putting the blame on the other. But after the impressive summit for freedom held two days ago, which brought together through internet thousands of people from all around the globe to advocate freely and support the Iranian protesters and the Iranian resistance, it is foolish to think that anyone will fall into their lies and propaganda. Iranians know better than that.

The members of the MEK, women, and men who have suffered torture both in the Shah’s prisons and in the mullahs’ prisons. They have seen their families and friends executed. They know who took away their freedom and who is the liar. They have stayed together, living together in Iraq, in Paris, in Tirana, or wherever it might be, fighting together because they know that they are the spearhead of the Iranian warriors for freedom. Their choice is to remain together, knowing of course that they can leave at any time if they wish to do so and that they can have their own private life whenever they decide to, but knowing also that they will be welcomed anywhere they wish to go in the world because they are recognized and admired for their struggle, for their skills, for their high education, for their proficiency and for their values they abide to in anything they undertake.

You see, being an Ashrafian is not a second-best choice in life. It’s not a solution against solitude or unemployment. It’s not an escaping strategy or transitional mode. It’s not being the puppet of anyone. Their leader, Maryam Rajavi has suffered and sacrificed as much or more than any of its members. A woman that can not be bought or intimidated or even silenced because she’s the voice of millions. She’s the hope of millions. She’s not the torturer but the victim. She’s not the prison guard but the key to freedom. She’s not a despot like her enemies but a justice fighter. Her strength is her lack of personal ambition. She lives for the people. She does not impose herself. She does not manipulate. She’s carried by the people, all the millions of Iranians, victims of the clerical regime, being like her, an Ashrafian, is I think the closest we can imagine today to being an apocalyptic warrior. It’s the stuff for heroes. It’s the destiny chosen by women and men who don’t give up. It’s the transformer’s option of the dreamer becoming the winner. Iran knows. They know where the truth is standing and who is flying its banner.

And even though I have not been called in my personal life to sacrifice as much as Ashrafians have for Iran, I declare myself proudly to be an Ashrafian because I have chosen as you have to struggle against oppression, lies, and death and to abide in every way to freedom, truth, and life. Iranians have understood that the best way to have the criminals accountable for their 40 years of crimes, is to overthrow this tyranny, to win this war for freedom. Hazer, hazer, hazer.

Ingrid Betancourt, ex Colombian Senator: Iran’s people are chanting “Down with Dictator, be it the Shah or the Supreme Leader. They are telling us they understand better than anyone how these 2 forces are working together #Freeiran2020 #1988Massacre https://t.co/oKNxdvXbtr