"Iranians think Ahmadinejad is not their representative, he’s a terrorist," said Bahman Badiee of the Iran Society of South Florida. 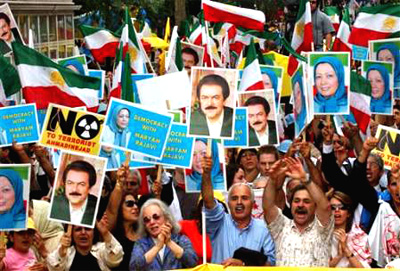 The vast majority of demonstrators were members of the National Council of Resistance in Iran (NCRI), whose president Maryam Rajavi lives in exile in France.

The NCRI is the political arm of the People’s Mujahedeen (MEK), which has been fighting the Islamic government in Tehran since the mid-1980s.

The MEK has been branded a terrorist organisation in both the United States and EU, and Rajavi is leading the campaign to have the label removed.

"We tell the world leaders … you can’t make the decision on what you want to do in Iran … make some deals or start a war," he said. "We don’t want appeasement. We don’t want war. We want to change the government."

Ahmadinejad was due to address the UN summit later Wednesday, with Iranian officials saying he would present new proposals to defuse suspicion over Tehran’s nuclear weapons ambitions.

The United States is hoping to use the three-day gathering to rally support for possible UN sanctions against the Islamic Republic for resuming sensitive work on uranium conversion.

"Ahmadinejad not only represents a terrorist regime, he is himself a terrorist," said Hamid Dara of the New York Committee Against Ahmadinejad, just one of the exile groups from around the US that participated in Wednesday’s demonstration.