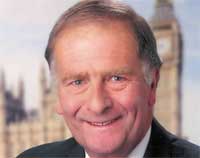 HUFF POST – By Roger Gale – 01/23/2012
If there is one thing guaranteed to have heated up the recent exchanges between the US and Iran, it is the issue of oil.

As the US pressed for stricter sanctions against Tehran’s attempts to press ahead with its nuclear programme, so Iran retaliated with a threat to close the Strait of Hormuz.

Leon Panetta, the US defence secretary, said that blocking the sea lanes through which most of the world’s oil is shipped is a “red line”, and it was reported that secret diplomatic communications were made directly with the Iranian leadership in Tehran.

Both Britain and the US made carefully choreographed and identical noises, pleading for a peaceful resolution but not ruling out possible future military action.

This fresh round of the diplomatic war has proved two things. First, the idea of making another attempt at “engagement” with Tehran’s regime has failed – they simply continue to rattle their sabres and issue ever more bellicose threats.

Second, the tougher sanctions being imposed against Iran’s central bank, and an EU embargo planned on Iranian oil, are not enough. They need to be evolved into a longer lasting and wider thinking policy.

For ordinary Iranians, watching the Arab Spring unfold around them and realising how their leaders have condemned them to international isolation sends out a message; now is the time for empowerment; now is the time to be galvanised.

For that to happen, the opposition to the regime must be allowed to find its voice. Led by Maryam Rajavi, the People’s Mojahedin Organization of Iran (PMOI) hopes one day to replace the brutal regime with a democracy. The PMOI`s manifesto is for a non-nuclear future for the country, for equal rights between men and women, for Iran to have a free press, and to espouse other forward-thinking policies.

But for the Iranian resistance to have a real say, first they must overcome a burden under which they are shackled. Designation as a terrorist organisation according to US law must be revoked.

The move is long overdue. The UK delisted PMOI in 2008, and the following year the Council of the European Union removed it from the list of designated organisations.

Support is overwhelming in the US as well. US Congress and dozens of senior former national security officials, in a rare bipartisan campaign, are all for delisting it. But only the State Department can authorise the move, and for inexplicable reasons, it is dragging its heels. The only tool the US seems interested in using at the moment with regards Tehran is sanctions. Why do officials not realise what a message it would send to recognise the legitimacy of the opposition? This is not a matter of political banner waving. There are more 3,000 people at a refugee camp in Iraq to whom this is a matter of life and death.

Camp Ashraf, 40 miles north of Baghdad, has been home to 3,400 exiled members of the PMOI for more than 25 years but recently Iraq’s new Prime Minister, Nouri al-Maliki, has appeared to support the desire of the Iranian regime to wipe out their principal opponents.

In two deadly attacks in 2009 and 2011, the Iraqi armed forces killed 47 of Camp Ashraf’s defenceless residents and wounded more than 1,000. Maliki vowed to close down the camp by the end of last year, raising alarms about another possible humanitarian catastrophe. A massive international campaign in the final days of 2011 averted the possible disaster and Maliki was forced to rethink his plans and agree to move the Iranian dissidents to a former US military base called Camp Liberty.

However the developments have stalled and Iraq has once again begun creating obstructions – including moves to make the camp more like a prison than somewhere offering “Liberty”.

The first months of 2012 will be crucial in deciding the fate of the refugees, whose numbers include nearly 1,000 women. But one element that would change the entire outlook, and offer them the greatest hope, would be to change the status of the PMOI.

All 3,400 dissidents have applied for political asylum. The UN refugee agency has wanted to process their requests for months, but the Iraq government has blocked such action.

The objective is to allow the Camp Ashraf refugees to relocate in third countries, but while they’re on the terror list, such relocation would be unlikely.

After so much procrastination, 2012 must be the year that the State Department takes decisive action. Tehran is not a friend to appease, and its regime fears all that the PMOI represents.

The United States must now unlock the shackles and allow the resistance to find its own path, away from Camp Ashraf, and towards a democratic Iran.

Sir Roger Gale is Conservative Member of Parliament for North Thanet and former Vice Chairman of the Conservative Party. He is a ranking member of the British Parliamentary Committee for Iran Freedom.

Previous article
To confront Iran, untie the hands of the opposition
Next article
The mullahs’ regime ambassador to Iraq abuse of UNAMI to suppress the main Iranian opposition group