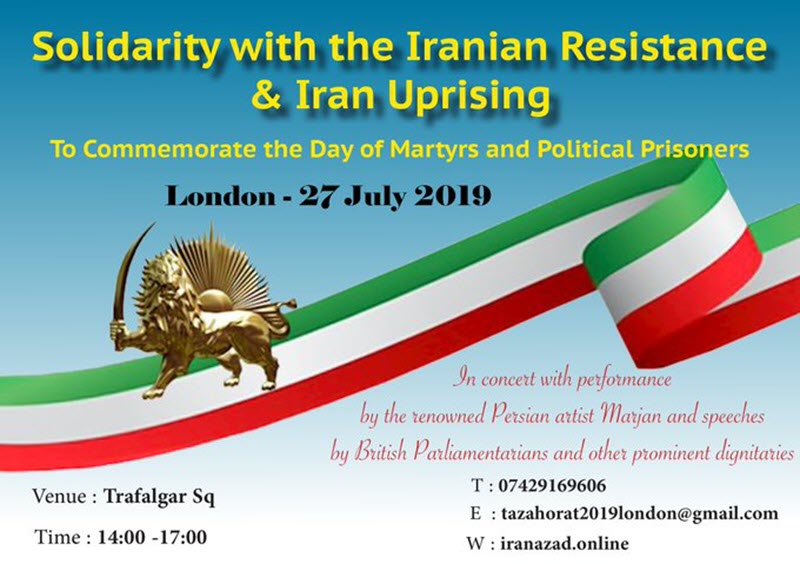 The Anglo-Iranian Communities in the UK will hold a major rally in London on Saturday, July 27, to express their support for ongoing popular protests and strikes across Iran for change.

The protesters are to call on the UK Government to stop placating Iran’s regime and adopt a firm policy that recognizes the democratic aspirations of the Iranian people. They will also urge the UK Government to translate its statements of concern into concrete actions by putting pressure on Iran’s regime to end the death penalty, arbitrary arrests and halt its warmongering, nuclear and ballistic missile projects and export of terrorism.

The Anglo-Iranians communities, supporters of the National Council of Resistance of Iran (NCRI) and People’s Mojahedin Organization of Iran (PMOI, Mujahedin-e Khalq or MEK), will be joined by cross-party Members of Parliament, renowned human rights advocates and personalities.

The rally in London will be the latest in a series of major demonstrations by Iranians throughout the world including major rallies in Brussels, Washington D.C., Berlin and Stockholm in the past few weeks. It takes place at a time that the issue of Iran has evolved into a major international concern and the clerical regime has stepped up creating tensions in the region to divert attention from popular protests at home.

The London demonstration will include a number of street exhibitions and theatre denouncing the regime’s crimes and human rights violations. The rally will begin with a gathering at Trafalgar Square and will be followed by a march.