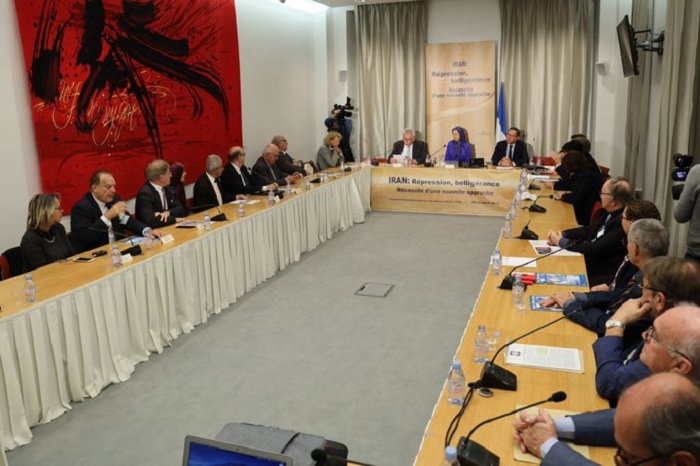 Members of France’s National Assembly on Tuesday, October 29, 2019, invited Iranian opposition leader Maryam Rajavi for a conference on European policy on Iran and spoke out against the regime’s human rights abuses and international acts of terror.

Mrs. Rajavi stressed that in order to advance its policy, the mullahs’ regime takes hostages and uses its embassies and diplomats to commit terrorist attacks in the United States and Europe, particularly in France. Export of terrorism and belligerence are the regime’s strategic means to stay in power. That is why the European Union and especially the French president have been frustrated in all their efforts to reduce tensions.

Mrs. Rajavi emphasized that only through the establishment of democracy in Iran can peace and stability be restored to the region. She said that the regime at its most critical period of rule is facing rising anger from the Iranian people, who are demanding regime change. The correct course of action for Europe is to support the Iranian people who demand the overthrow of this regime.

Mrs. Rajavi said that there is no possibility of moderation in this regime, which merely buys time for itself by exploiting conciliatory Western policies while it continues its aggression in the region and advances its ballistic missile program. Meanwhile, Tehran disseminates propaganda inside Iran to strongly criticize France and Europe.

She added that this regime will never change its behavior because it is too weak and isolated. Changing its behavior is tantamount to changing the regime. It cannot give up warmongering, its nuclear projects, or its missile projects in exchange for economic and political concessions. If no firm policy for dealing with this regime is adopted, it will be emboldened and will intensify tension and crises in the region.

French parliamentarian André Chassaigne explained the developments in Iran after the nuclear deal and said that since then, Iran is boiling with popular protests. He added that the only way is to support the Iranian people in addressing the regime’s violations of human rights. He stressed that it is naive to try to modify the mullahs’ regime.

Michèle de Vaucouleurs, Chair of the Parliamentary Committee for a Democratic Iran, stressed that this Committee has carried out its mission to inform French parliamentarians and French public opinion on the issue of human rights and women’s rights in Iran, and touched on recent developments in Iran with human rights violations, especially in the field of repression of women.

Speaking of her visit with her colleague Hervé Saulignac to Ashraf III, the base of the main opposition group People’s Mojahedin Organization of Iran (PMOI, Mujahedin-e Khalq or MEK) in Albania, when MEK received in their compound more than 350 political and parliamentary figures from 47 countries this summer, she said that this city and its residents are a source of hope for the Iranians to liberate their country from the yoke of the religious dictatorship.

Philippe Gosselin, co-Chair of the Parliamentary Committee for a Democratic Iran, stressed the understanding presented by Mrs. Rajavi on the nature of the Iranian regime, referring  to the conspiracy planned by Iran’s ruling clerical regime to blow up the annual General Gathering of the Iranian Resistance in Paris in 2018, which led to the expulsion of a regime diplomat in France, and another diplomat still imprisoned in Belgium awaiting trial.

Mr. Gosselin commended Mrs. Rajavi’s 10-point plan on future Iran for freedom, democracy and peace and tranquility in the region and the world.

Yannick Favennec, member of the Defense Committee of the French Parliament and Vice-Chairman of the Parliamentary Committee for a Democratic Iran, also spoke about the Iranian regime’s destructive and destabilizing actions in the region. He stressed that the solution to the Iranian issue can only come from the Iranians themselves, as Mrs. Maryam Rajavi has said time and again. “Foreign war and negotiations without end lead to more aggression and threats. We must think about change, and we must support regime change by the Iranian people and the Iranian resistance,” he added.

The CPID includes members of parliament with various political affiliations.

Simultaneous with the conference, for the first time an exhibition on the massacre of 30,000 political prisoners in Iran in 1988, was held next to the National Assembly on the Esplanade des Invalides. The overwhelming majority of the victims of the massacre, which is considered the largest massacre of this kind since the Second World War, were activists of the People’s Mojahedin Organization of Iran (PMOI/MEK).