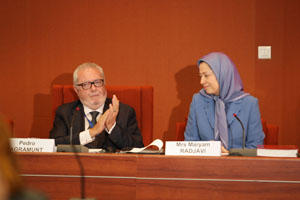 Text of speech by Maryam Rajavi, the President-elect of the Iranian Resistance:

I am very delighted to be speaking with all of you today.

I have come today, to draw your attention to two important issues:

First – After September 1st massacre at Camp Ashraf, 52 person were killed and 7 hostages, including 6 women are detained by the Iraqi government.
Urgent action is needed for their release.

Second – The threat of a new phase of dangerous policy by the religious fascism ruling Iran.

Today, the situation in my own country and the rest of the region is extremely tumultuous, and this has direct impact on global peace and security. Killings in Syria have been carrying on for the past two years. Violence in Iraq is on the rise. Fundamentalism has expanded its reach throughout the region. And the Iranian regime’s nuclear dossier remains unresolved while the mullahs continue their mad dash towards a nuclear weapon. But, the people in the region demand democracy, freedom, prosperity and social justice.

So, what has to be done? There are numerous problems gripping that region of the world, but for reasons that I will elucidate later on, the beating heart and source of all these problems is the regime ruling Iran.

The Iranian regime is the main supporter of the Syrian dictatorship. The regime’s Islamic Revolutionary Guard Corps (IRGC) is responsible for commanding Assad’s forces. Hezbollah is in effect the Lebanese branch of the IRGC and advances the regime’s policies. In Iraq, on the one hand, the regime inflames sectarian conflict and terrorism, and on the other hand it transfers aid to Bashar Assad through its puppet government there. The Iranian regime has officially declared that its alliance with Nouri al-Maliki, Assad and Hezbollah shapes a “resistance front,” which means resistance against change, democracy, human rights and peace. They are in dire need of such a front, and its collapse would signify a great leap towards the mullahs’ overthrow.

Over the past two months, the mullahs and their lobby abroad have launched a campaign to give the impression that Rouhani will initiate fundamental changes. Through demagoguery and deception and by taking advantage of the weak American and European conducts, they seek to gain fresh concessions from the West and break the sanctions.

Rouhani’s trip to New York demonstrated that this is nothing but a delusion. Observers note that aside from his rhetoric, Rouhani carries with him no semblance of change. His speech in New York was a reiteration of Khamenei’s positions.

Over the past 34 years, Rouhani has been part of the power structure and has been involved in all of the crimes committed by the regime. With respect to the nuclear issue, he has publicly declared that he deceived the European Troika in the course of the previous negotiations. His repeated but hollow declarations of the inclination to resolve the nuclear issue is a reflection of the regime’s weakness, a regime that aims to buy more time for itself through such maneuvering.

The Iranian regime is profoundly terrified of public uprisings. Years of economic mismanagement have created deep crises in the country. Public disenchantment is mounting. On the other hand, sanctions have increased pressures on the regime. That is why the mullahs intend to use various man oeuvres and even some formal and tactical concessions in order to prevent a social explosion in the form of public uprisings.

There are some who argue that Rouhani should be given a chance. But this is exactly what Khamenei wants. Their objective is to reduce the level of sanctions in the hopes of overcoming the crisis, all in the name of giving Rouhani a chance. This then would be a big mistake. Lessening the sanctions and any action under whatever pretext that would confer legitimacy upon the mullahs would only prolong the life of the religious fascism ruling Iran, which runs counter to the interests of the Iranian people. As U.S. Congressional leaders have also noted, now is the time to increase sanctions and firm policies in order to force the mullahs to retreat.

But as far as the Iranian people are concerned, the issue cannot be limited to the nuclear dossier. As I said the day after Rouhani’s appointment, there are six criteria for judgment: Respect for human rights, freedom of expression, release of all political prisoners and not just a few, freedom of all political parties, stopping its meddling in Syria and Iraq, and terminating the nuclear weapons program.

With respect to the nuclear issue, the indicator and criterion would be the full implementation of UN Security Council resolutions, which means a full halt of enrichment and the ratification of the Additional Protocol. In order to achieve this, there is no need for many negotiations. It would be a great deception to say that it seems that the nuclear dossier is somehow equivalent to the Iranian people’s identity. The Iranian people seek freedom and social prosperity and not a nuclear weapon.

When it comes to human rights, in the weeks following the regime’s sham elections, over 200 people have been hanged in Iran. The degree of suppression has greatly intensified. During the three days that Rouhani was in New York, he spoke of non-violence and democracy, but according to the Iranian regime’s media outlets, 22 people were hanged in various cities.

We caution that no parties should strike deals with the regime by overlooking its human rights violations, its killing of Iranian dissidents in Iraq, and the crimes it commits in Syria.

A colossal mistake would be to overlook the regime’s weakness. The regime is extremely vulnerable in the face of widespread public discontent, the threat of large-scale uprisings and profound economic crises. International sanctions have made the degree of such vulnerability even greater. This is a regime that is tumbling down towards overthrow. The growing feuds within the regime are yet another indication of this situation.

Taking a step back and retreating in the areas of human rights violations, the nuclear weapons project and export of terrorism and fundamentalism abroad would lead to the regime’s overthrow. The experiences of the past 34 years have shown that a retreat would not take place, but even if it does, this would be great news for us and for the Iranian people.

The Iranian regime’s officials formally announce that the regime’s strategic depth lies in Syria and Lebanon. But the reality is that the mullahs have no conceivable way out of this debacle. The only answer for Iran is regime change at the hands of the Iranian people and their organized resistance.

One can point to another aspect of the regime’s trepidation over the prospect of overthrow by glancing at its conduct towards the main opposition force. On June 15, a few hours before announcing Rouhani as the winner of the regime’s sham elections, Tehran’s agents in Iraq launched a missile attack against Camp Liberty, where members of the People’s Mojahedin Organization of Iran (PMOI/MEK) reside. Subsequently, on September 1, Maliki’s forces, at the behest of the regime, conducted a massacre against the residents of Ashraf. They executed 52 of the residents with many of them having their hands tied behind their backs. Wounded residents were shot dead on hospital beds and seven people were taken hostage. Fearing their overthrow, the mullahs intend to annihilate their cohesive opposition force, which is their alternative, in order to thwart change.

The way in which all European and American governments respond to this crime against humanity represents a test for all of them. It is sad to say that what has taken place so far has barely surpassed the issuing of condemnation. A lack of a firm response would intentionally or inadvertently show a green light for more massacres in the future.

For the past month, seven PMOI members, including six women, have been held hostage. On September 19, Baroness Catherine Ashton confirmed that the hostages are being held at an Iraqi prison and face the threat of extradition to Iran. So, why has the Council of Ministers remained silent about this state-sponsored crime? Why have the member states remained silent in the face of this blatant hostage-taking by a government? The UN High Commissioner for Refugees says that according to the reports it has obtained, these missing people remain somewhere in Iraq. The Chairman of the U.S. Senate Foreign Relations Committee has officially demanded the release of the hostages from Maliki’s government. The adoption of measures to secure the immediate release of the hostages is a profoundly humanitarian matter and at the same time a political imperative for the region’s peace and security. Silence and inaction would be tantamount to accepting this crime and encouraging the mullahs and their puppet government in Iraq to continue committing similar crimes.

Despite our extensive efforts and the extremely high costs that we have incurred, European countries have not accepted even the ill and wounded residents of Liberty. Is this not surrendering to the mullahs’ threats that they should refrain from taking in Liberty residents?

Allow me to reiterate here the minimum measures expected to be taken by the European Council and member states, and I urge all of you, as the representatives of the European people who have always been on our side, to make efforts to ensure that these measures are adopted:

1. Pressure the Iraqi government to release the hostages and warn that if the hostages are not released, EU aid to Iraq would be suspended.

2. Demand from the United Nations, the UN Secretary General and the UN Under-Secretary-General for Political Affairs to post a UN monitoring team accompanied by a unit of Blue Helmet forces at Camp Liberty to guarantee protection. Protective requirements for Camp Liberty must be met as soon as possible.

3. The residents of Liberty are all considered refugee-seekers, and therefore as a first step, those with refugee status in European countries, those who are sick and those who are injured must be accepted.

4. Call on the UN Secretary General and the UN High Commissioner for Human Rights to launch an independent investigation into the crimes committed on September 1 and bring the perpetrators to justice.

The prerequisite for peace, security and stability in the region is the adoption of a firm policy towards the Iranian regime.

In contrast to many of the countries in the region, there exists an alternative, a coalition of democratic forces, for Iran. We seek a republic based on the separation of church and state, pluralism, gender equality, abolition of the death penalty and the eradication of the mullahs’ Sharia laws. We seek a non-nuclear Iran that lives in friendship and at peace with all its neighbors as well as with the rest of the international community. This is the image of tomorrow’s Iran and I encourage all of you to support it.