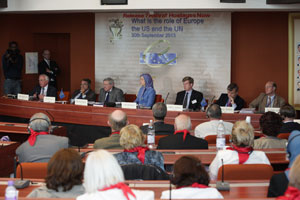 NCRI – Mrs Maryam Rajavi, President-elect of the Iranian Resistance spoke Monday at a conference in Parliamentary Assembly of Council of Europe in Strasbourg.

In her speech, Mrs. Rajavi warned of the dangers of a new phase of anti-human policies of the regime ruling Iran.

She said that the Iranian regime is extremely vulnerable to widespread popular discontent, threat of large-scale social upheavals, and deep economic crises. International sanctions have exacerbated this vulnerability. This regime is currently on the path to its overthrow. The intensification of the regime’s internal power struggle reflects this condition.

Maryam Rajavi said that the most recent example of this policy was the attack by the regime’s puppet government in Iraq against Camp Ashraf, which included the mass execution of 52 members of the people’s Mojahedin Organization of Iran (PMOI/MEK) and the hostage taking of seven more.

Previous articleIran: A young woman hanged in Mashhad
Next articleConference in PACE calls for release of seven Camp Ashraf hostages in Iraq