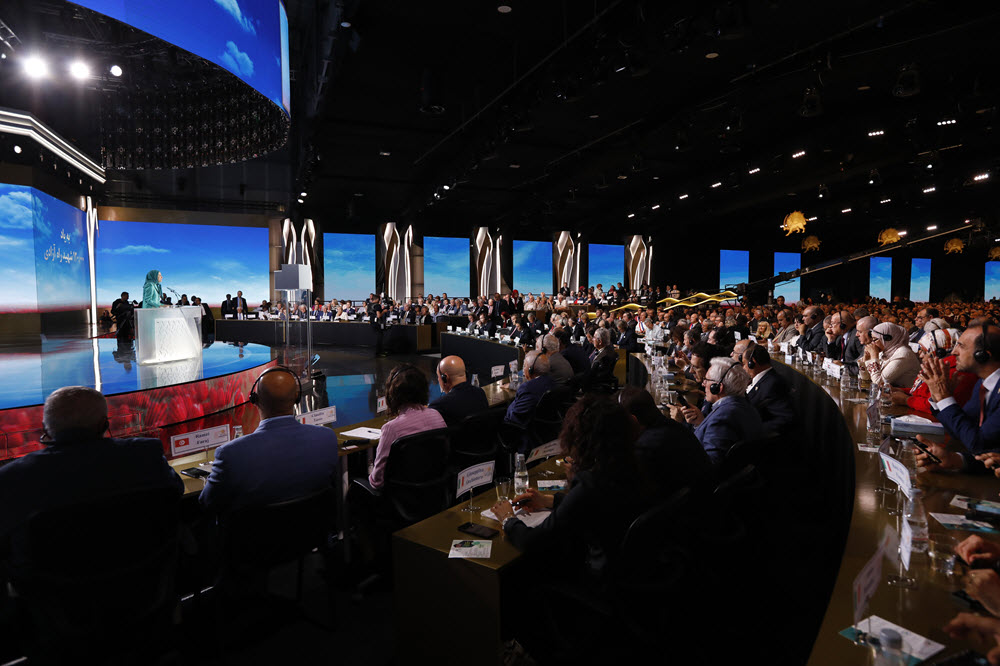 Iran’s largest opposition group, the People’s Mojahedin Organization of Iran (PMOI, Mujahedin e Khalq, or MEK), opened the doors of its new home base to the world on Saturday with a wave of praise from political leaders from both the left and the right, hailing from nearly 50 countries and all enthusiastic about the group and its goals, The Washington Times wrote on Sunday.

The Ashraf-3 community, not quite finished, rests on a sprawling plot that until 30 months ago was farmland. It is about halfway between the Albanian capital of Tirana and the Adriatic coastline, the report said.

“Home to more than 3,000 Iranian dissidents from the Mujahedeen-e-Khalq, best known as MEK, Ashraf-3 is too new to appear on map programs. Cement was still drying around the base of some flag posts, and workers were painting the handrails on a bridge as more than 350 dignitaries from 47 countries arrived,” the paper wrote, adding: “The gathering was MEK’s 15th ‘Free Iran’ event but the first in Albania. Paris hosted the event From 2004 to 2018.”

“We look at the fact that so many leaders came to our home so far from where they live as a testament to the international support that exists for MEK and the faith they have in what we want to accomplish,” said Mohammad Mohaddessin, chairman of the foreign affairs committee for the National Council of Resistance of Iran, an umbrella group that includes the MEK.

The two main themes in remarks from dozens of speakers were praise for building Ashraf-3 and organizing the event, and a desire to see the Iranian regime toppled, The Washington Times.

Regime change in Iran is the central goal of the MEK, the report said pointing out that the Iranian democratic opposition aims to step into the void that a collapsed Iranian regime would leave only long enough to hold free elections and establish a secular state.

“Under the plan, Maryam Rajavi would step in as president-elect until elections are held,” The Washington Times wrote, pointing out that she was the event’s keynote speaker.

The Washington Times added that Mrs. Rajavi’s remarks were interrupted repeatedly by loud chants of “Iran! Maryam! Freedom!” and “From Ashraf to Tehran, we will fight to the end!”

But in her opening remarks, Mrs. Rajavi appeared to endorse President Trump, who helped raise MEK’s profile after pulling out of the Iran nuclear deal last year.

Iran’s “calculation is that terrorist operations and the warmongering in the region’s countries will not cost them very much, at least until the next U.S. presidential election,” she said. “They say to themselves: ‘Let’s wait another 16 months and maybe the U.S. will have another president from whom we can extract the same super concessions as we did with the nuclear deal.’”

She said that strategy would fail in the face of MEK’s efforts. “We will never abandon our struggle,” Mrs. Rajavi said.

Former New York City Mayor Rudolph W. Giuliani, a legal adviser to Mr. Trump, attended most of the Paris versions of the MEK event. He said he felt “a kind of optimism at Ashraf-3 that [he] never felt in Paris” and that support for MEK should be a simple conclusion for those around the world.

“This isn’t a choice between deposing a dictator when we don’t know if an even more terrible leader will take his place,” Mr. Giuliani said. “It’s a choice between one of the most terrible sponsors of terrorism in the world in the current regime in Iran, and we have MEK ready to step in.”

Joseph Lieberman, a former senator and the 2000 Democratic vice presidential candidate, said, “You don’t just represent an alternative to the Iranian mullahs. You represent the right alternative.”

The Washington Times further pointed out that Iranian officials “have targeted MEK on a massive scale. Ashraf-3 includes a museum that details the torture and deaths of as many as 120,000 MEK supporters. In 2015, Iran launched a 40-rocket attack against Ashraf-2, MEK’s previous home in Iraq, leaving 24 dead. A car bomb attack on Ashraf-3 last year was foiled before explosives could be detonated.”

Despite the risks, sisters Forough and Hejrat Moezzi, ages 30 and 31, respectively, say Ashraf-3 is the first place that feels like home to them since they left Iran 12 years ago. Both were residents of Ashraf-1 and Asraf-2 in Iraq.

“This is the best place yet because here we feel safe,” Forough said. “I know we will stay here until we can return to our country.”

Hejrat said it was a particular honor for the international dignitaries to come to Ashraf-3. “These are people who have stood behind us for many years,” she said. “It is so wonderful to be able to welcome them to our home.”

Ashraf-3, MEK’s first home outside the Middle East, was built in Albania because the country was one of a handful to offer refuge to the group. Speaking Saturday, former Albanian Prime Minister Pandeli Majko explained that the move was part of the country’s history.

“In 1943, the Nazis conquered Albania and had two main demands when an Albanian delegation went to Berlin,” Mr. Majko said. “They wanted our gold transferred to Berlin, and they wanted a list of all the Jews in Albania. Our answer was simple: the gold, yes; the Jews, no. Protecting those in need is part of our identity.”

The speed with which the heavily guarded town was built — complete with parks, conference halls, shopping centers, restaurants, swimming pools and a luxury hotel — was enough to make Mr. Giuliani marvel.

“This whole city was built in less than two years,” Mr. Giuliani said. “If we tried to do this in New York, it would take 15 years and launch 14 corruption investigations.”

Previous article
EDITORIAL: Five days that can shake Iran
Next article
At MEK Rally, Giuliani Tells Iran Regime’s Leaders: You Are Mass Murderers, ‘You Have to Go!’