At MEK Rally, Giuliani Tells Iran Regime’s Leaders: You Are Mass Murderers, ‘You Have to Go!’ 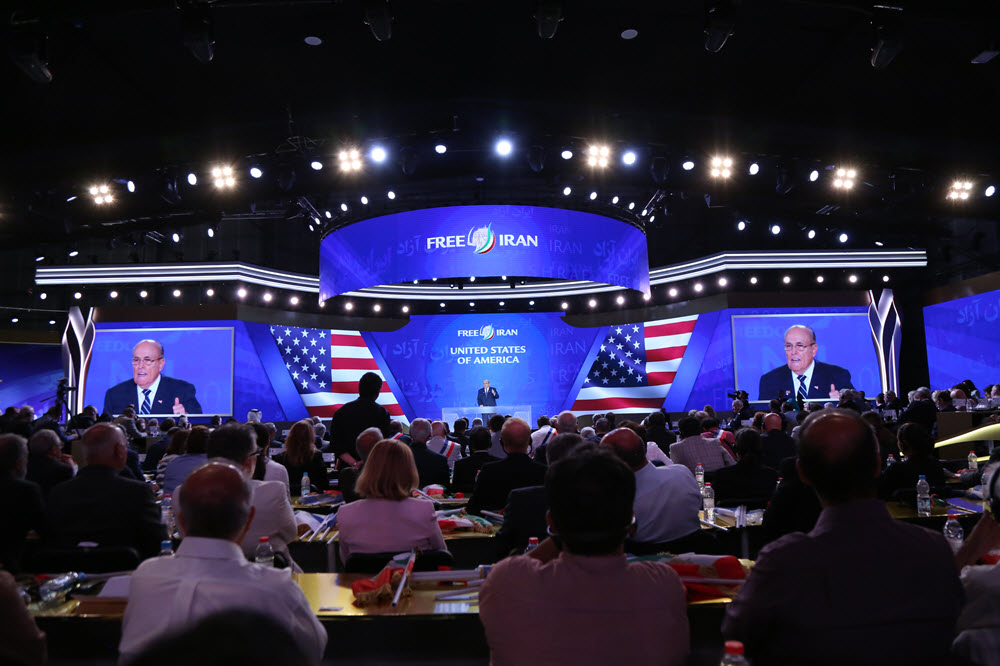 Former New York City Mayor Rudy Giuliani spoke Saturday at the annual Free Iran event, held at the headquarters of Iran’s main opposition group the People’s Mojahedin Organization of Iran (PMOI, Mujahedin e Khalq, or MEK), where he accused Iran’s regime of “crimes against humanity,” and said that its dictatorship could no longer be tolerated, CNSNews.com reported on Monday.

Mayor Giuliani was one of hundreds of representatives from almost 50 different countries that attended the historic event held at Ashraf-3 in Albania, the new headquarters of the People’s Mujahedin of Iran (MEK), Iran’s primary resistance group, the report said.

“Aren’t we now at the point in history when we can all stand up and say, ‘No more! No more murders, no more crimes, no more oppression. You have to go!’” Giuliani said.

“I accuse them,” he said in his remarks. “I accuse the ayatollah, and [President Hassan] Rouhani, and all of their sycophants and followers. I accuse them of murder, not just murder, mass murder, crimes against humanity. How can we tolerate this and look at ourselves in the mirror?”

Giuliani also charged the European Union with complacency in dealing with Iran’s regime. “We should be embarrassed for our countries, if they haven’t stood up against this,” he said. “There is no middle ground here. It doesn’t get us so angry that we’re willing to act. So there are three things that we have to do. Number one: we have to get the governments of Europe to stand up, to wake up, to reclaim their dignity and their honor.”

The president-elect of the National Council of Resistance of Iran, Maryam Rajavi, also headlined the rally, CNSNews wrote, adding: “She praised President Trump for his firm stance against the Iranian Regime but warned that the Iranians intend to stall in hopes of a more passive president following the 2020 election.”

“They say to themselves: ‘Let’s wait another 16 months and maybe the U.S. will have another president from whom we can extract the same super concessions as we did with the nuclear deal,’” remarked Rajavi.

This was not the first time that Giuliani has called out the Iranian leadership. In February 2019 at a conference in Warsaw, Giuliani denounced the Iranian regime by saying that its leaders are “assassins, they are murderers and they should be out of power.”

The MEK calls itself the democratic government-in-exile of Iran. Should the organization take control, it says it will establish President-elect Maryam Rajavi as Iran’s temporary leader until elections can be held.

Rajavi has presented a ten-point plan that she says will restore freedom to Iran and balance to the Middle Eastern region, including gender equality, denuclearization, democratic elections, and the separation of religion from the state, the report added.

Previous article
MEK Vows to Step up Fight Against Iran Regime From Ashraf-3 Base in Albania – Washington Times
Next article
Britain’s Express: Iran’s Regime Is Crumbling and We’re Ready to Take Over, Says the MEK