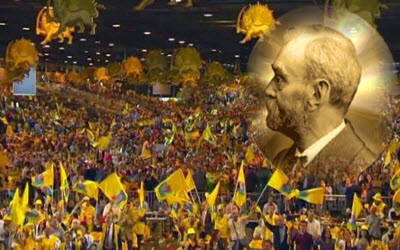 Twenty-five Nobel laureates have declared their support for the major “Free Iran” gathering in Paris on July 9 and its objectives.

The academicians and scientists who are signatory to this declaration are Nobel Prize winners of the years 1979 to 2014.

The Nobel laureates declared their solidarity with the objectives of the July 9 grand gathering and wished success for the Iranian people’s “great campaign in pursuit of democracy and human rights in Iran.”

While expressing concern about the conditions of the members of the People’s Mojahedin Organization of Iran (PMOI or MEK) in Camp Liberty in Iraq, they called on the “international community, especially the United States and the United Nations, to carry out all possible measures to guarantee the security of these refugees in Iraq until the last individual is resettled in a third country.”

Hundreds of prominent international personalities and lawmakers from the United States (in a rare bipartisan show), France, other European countries, Canada, Australia and large delegations of personalities, lawmakers and activists from Arab and Middle Eastern countries as well as the moderate Syrian opposition will take part in the July 9 grand gathering.

The “Free Iran” gathering will take place on the eve of the first anniversary of the P5+1 nuclear deal with the Iranian regime.

Previous article
Maryam Rajavi’s message to UK Parliamentary conference
Next article
Statement by 80 Church leaders from the U.S. and UK