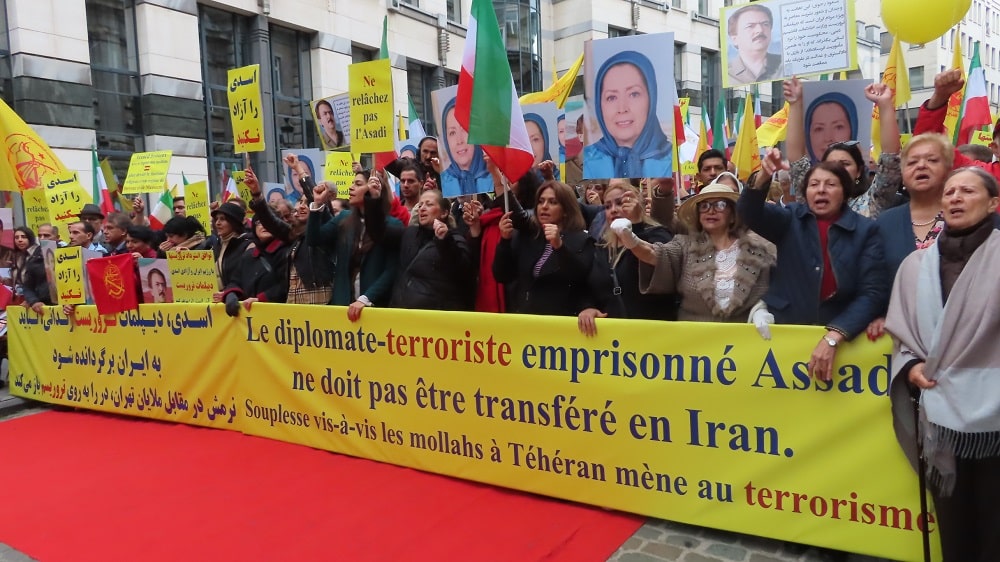 On Monday, September 19, while the Belgian Court of First Instance held its session to hear the Iranian National Council of Resistance’s legal team as well as the Belgian government’s arguments on the new Iranian-Belgian prisoner swap treaty, a large demonstration was held in Brussels, in front of the Ministry of Foreign Affairs.

Many Iranians from across Europe joined hands and voices to call on the Belgian Judicial System to stand firm against an immoral decision made by the Belgian Executive and Legislative Branches to execute a treaty that paves the way for unchallenged terrorism on European soil by releasing convicted state terrorists into Tehran’s embracing arms. 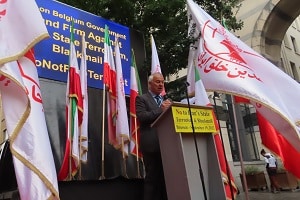 Former MEP from Portugal, Paolo Casaca, addressed the demonstration and said: “With utmost shock and bewilderment, I and so many others were informed about the secret negotiations of the Belgian Foreign Affairs Ministry and the regime in Iran. These negotiations were aimed to sign off an international treaty so the Iranian regime can exchange an organized terrorist cell with innocent citizens. So far, Belgian judiciary officials delayed the implementation of this deal and jeopardized its legitimacy.”

“A very competent legal team is representing some of the victims of the terror attack are now challenging those decisions. I want to express my sincere respect to those who have fought for years and who stopped this terrorist assault. It is certainly not their fault that the Belgian government decided to disrespect these efforts and is conducting such a shameful deal with terrorists.”

“I’d like to express my solidarity with those prisoners as well as the Belgian hostage in Iran who now has become the subject of the Belgo-Iranian deal. As it is a common practice of the Iranian regime, every innocent hostage is a victim of this ruthless authoritarian regime, and they deserve the utmost attention. I believe that Belgium must protect the rights of its citizens. However, exchanging the lives of an innocent person in prison for the lives of other innocent citizens that will become new targets would be morally unacceptable, and it will be an incentive for the Iranian regime to take more hostages.”

“The Brussels attacks of 2016, as well as the foiled attack in 2018, show the same resolve by terrorists to undermine human rights and the lives of freedom-loving individuals. Sabotaging justice in one case will not achieve justice in the other. It can only achieve a disaster.”

“The Belgium government must demand the immediate and unconditional release of the hostages in Iran to end their pain. It must use the best leverage it possesses, including the expulsion of the Iranian diplomats from Belgium. For a stronger result, Belgium must fully cooperate with other nations who are threatened by Tehran. Most importantly, it should announce solidarity with those who fight for freedom in Iran.”

“There is only one way to defend the values and the rights of the Belgian people: to demand respect for Belgium and other countries as a precondition for normal diplomatic relations. Prepare your country to defend your values and to invoke this shameful treaty.” 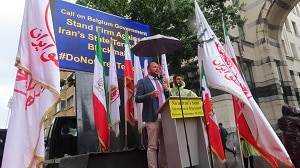 Referring to the murder of Mahsa Amini in Tehran, MP Theo Franken, former Belgian State Secretary for Migration and the head of the Belgian delegation at NATO, said: “Since Mahsa Amini’s death, there have been a lot of protesting going on in Iran. I hope that the people of Iran continue these protests against Khamenei and all the other clerics. When there is a protest in Iran, I’m always thinking of the people who are shot by the military forces. The only thing that is keeping the regime in Tehran in power is their atrocities. Therefore, it is very courageous of the Iranian people who continue their protest here as well as in other countries across Europe. Even more brave are the men and women protesting inside Iran, and I hope they will resist until the end until Iran does see change.”

“This week, there is the UN General Assembly in New York, and a lot of protesters, as well as the NCRI, will protest against the Iranian regime. I know that you hoped that Raisi, the butcher of Tehran, would not be allowed to go to New York. I read a letter from more than 50 US Congressmen and women that wanted to prevent this visit. But I think he will go, and the new administration in Washington might not have the same policies as the older one.”

“We have the same problem in Europe with the deal on Assadi. Politicians in Europe need to understand how the regime in Tehran operates. I think it is your most firm cause to keep the protest and expose this deal. You have stood in the streets in hot weather and in rainy weather, but you are not alone, and you have opened many eyes. At the end of the day, we will prevail, not only in the case of Assadi but in the fight against the Iranian regime until a free Iran is achieved and women can live in a free and democratic country.”

Serge de Patoul, former Member of Brussels Parliament, also stated: “I have been with you before the shameful treaty was voted for in the Belgian parliament. Our government has put itself in an absurd state. Because this is a serious blow to the great work of the Belgian Judiciary, this only shows us that we should not negotiate with a terrorist state. This also puts Belgium and Europe in danger as it promotes state terrorism and emboldens the terrorist to conduct their practices everywhere else. Therefore, we have to stress that it’s unacceptable to release Asadollah Assadi. This is not appropriate for Belgium, nor any other free nation on earth.”

“Following the murder of Mahsa Amini, there is no room for discussions anymore other than that this regime must go. I have been to Ashraf 3 in Albania, and I just wanted to express my support for your struggle and a free and democratic Iran.” 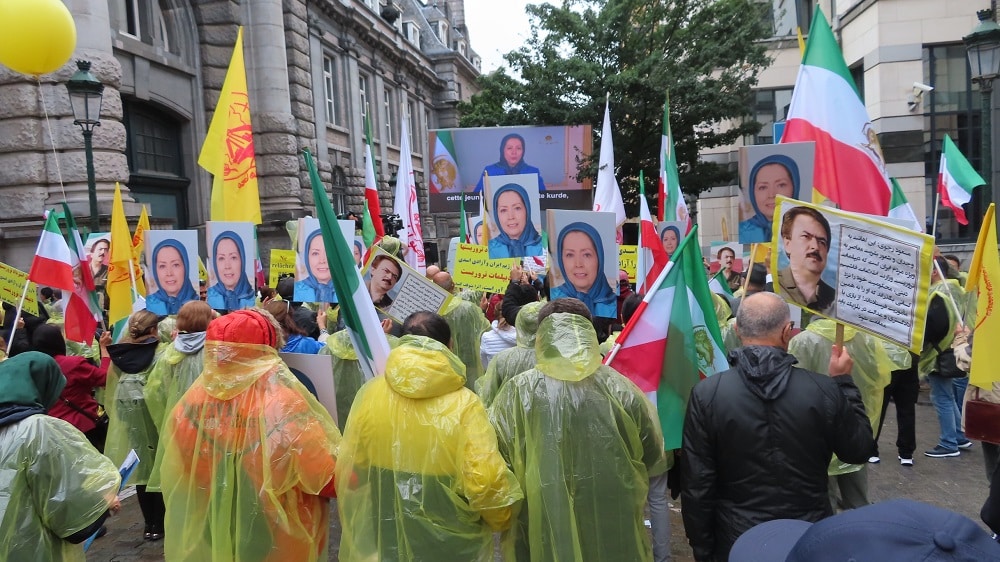 Addressing the demonstration via a video message, NCRI President-elect Mrs. Maryam Rajavi said: “It has been nearly three months that you prevented the repatriation of the bomb-carrying terrorist diplomat to his masters. You have blocked the path for the mullahs who sought to take advantage of this law to establish their terrorist headquarters in the heart of Europe. With your intensive campaign in 16 countries, you have challenged the West’s policy of appeasement.”

“Today, the mullahs have openly declared war on Iranian society with the expansion of women’s oppression. The atrocious murder of Mahsa Amini, an innocent young woman from Kurdistan, at the hands of the State Security Force’s mercenaries is a part of this brutal war and repression. They wanted to break our people’s spirit and stop the protest movement. But the resistance of courageous Iranian women and youths in Sanandaj, Saqqez, and Tehran showed that the people of Iran will not remain silent and are determined to overthrow the evil clerical regime.”

“Criminals should know that a flood will arise from the blood they spill every day and will eventually terminate the rule of the mullahs’ regime.”

“Let us not forget that terrorism and hostage-taking diplomacy are not in themselves effective for the regime. Rather, the kowtowing of Western governments has turned them into an instrument to advance the regime’s criminal policies and encourage the regime to continue its hostage-taking.

Those behind this treaty do not respect the norms of the rule of law. They violate the decisions of their own courts. They turn their backs on democracy for commercial and political advantages and, among others, open a way to revive the JCPOA.”

“They negotiate with the government of Ebrahim Raisi, the henchman of the 1988 massacre, right after he takes office. They want to give him a gift by releasing one of his functionaries. In practice, they are giving the mullahs free rein to intensify terrorism abroad and executions in Iran. This year, the mullahs have doubled the number of executions compared to last year. The National Council of Resistance of Iran revealed, based on documents obtained from within the regime’s Judiciary, that nearly 5,200 prisoners are currently either on death row or face death by retribution in kind.”

“The fact that the regime has failed to reach a new nuclear deal in the past two years, despite its urgent need to lift sanctions, is an indicator of its weakness and powerlessness.”

“Raisi’s government, which Khamenei installed to control the regime’s precarious situation, has now become a symbol of his failure. The slogan “down with Raisi” has become the common slogan of the Iranian people’s protest movement. The public’s anger and disgust against him have terrified the entire regime. Moreover, Khamenei has no solution in one of the most precarious periods of his rule.”

Manel Mslami, President of MR Women in Brussels stated: “We want to express our solidarity with the women in Iran. Women in Iran were furious following the murder of Mahsa Amini and the people of Iran joined these protests. Today, the students of Amir Kabir University in Tehran said they strive for revenge. All of Iran is furious now. It’s shocking what we are witnessing in Iran.”

Today together with European and Belgianpolitical leaders in the peaceful rally organised in solidarity with the Iranianpeople and inparallel withthe demonstrations and uprisings heldin #Iran following thedeath of #mahsaAmini #Freeiran #Notoforcedhijab #StopViolenceAgainstWomen pic.twitter.com/ec8n3mac9U

“We need to continue to support the women in Iran without preconditions. Injustice somewhere is injustice everywhere.”

“Regarding Assadi, 21 former ministers and 68 legal experts called on the Belgian Prime Minister not to release this diplomat terrorist. When I heard the news, I was concerned about our own security in Europe. We have to support those who struggle for freedom and democracy in Iran. We must support free Iran.” 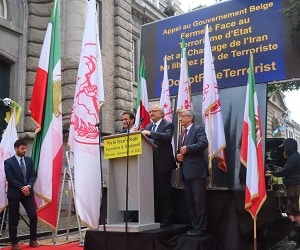 NCRI Foreign Affairs Chairman Mohammad Mohadessin who was coming back from the court, reported to the protestors that the plaintiffs’ lawyers offered a very strong defense, explaining to the judges why the Iranian terrorist-diplomat Asadollah Assadi should not be released.

Meanwhile, the lawyers of the Belgian government failed to provide new arguments or evidence and it would be up to the court to make a decision.

Mr. Mohadessin expressed his gratitude for the tireless activism and endurance of supporters of the Iranian Resistance. 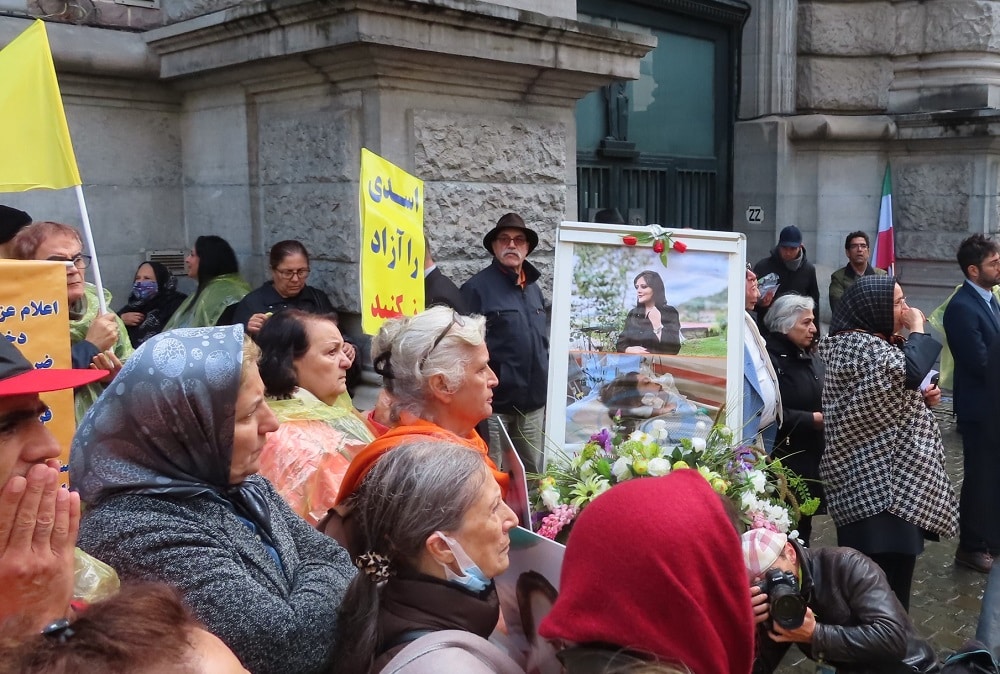