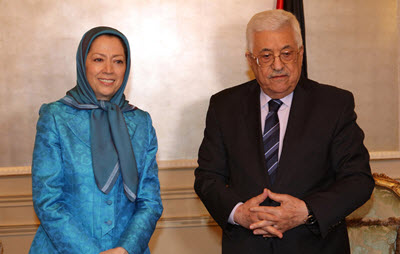 New Europe published Monday a report on the meeting over the weekend in Paris between Maryam Rajavi, President-elect of the Iranian Resistance, and Palestinian President Mahmoud Abbas.

The following is the full text of the report published by New Europe on August 1, 2016:

President of National Council of Resistance (NCR) Maryam Rajavi met on Saturday, in Paris with the Palestinian leader Mahmoud Abbas. At the meeting, the two politicians reiterated the need to combat terrorism and fundamentalism in the region, and discussed the French initiative to revive peace process between Israel and Palestine.

Rajavi, a leader of the Iranian opposition in exile met with Mahmoud Abbas, who visited Paris to discuss two-state solution with the French President Francois Hollande and US Secretary of State John Kerry. Abbas expressed his solidarity with the NCR, whereas Rajavi supported the initiative of France regarding the resumption of Israel-Palestine peace talks, and accused the Iranian regime of instigating sectarian discord in the region.

The NCR was founded in July 1981 in Tehran to oppose the fundamentalist regime ruling Iran and establish a pluralist democracy. Eventually, the Council moved its headquarters to Paris. On July 9, 2016 NRC organised an annual rally in the capital of France, which brought together dissidents and activists living in exile from Iran around the world.