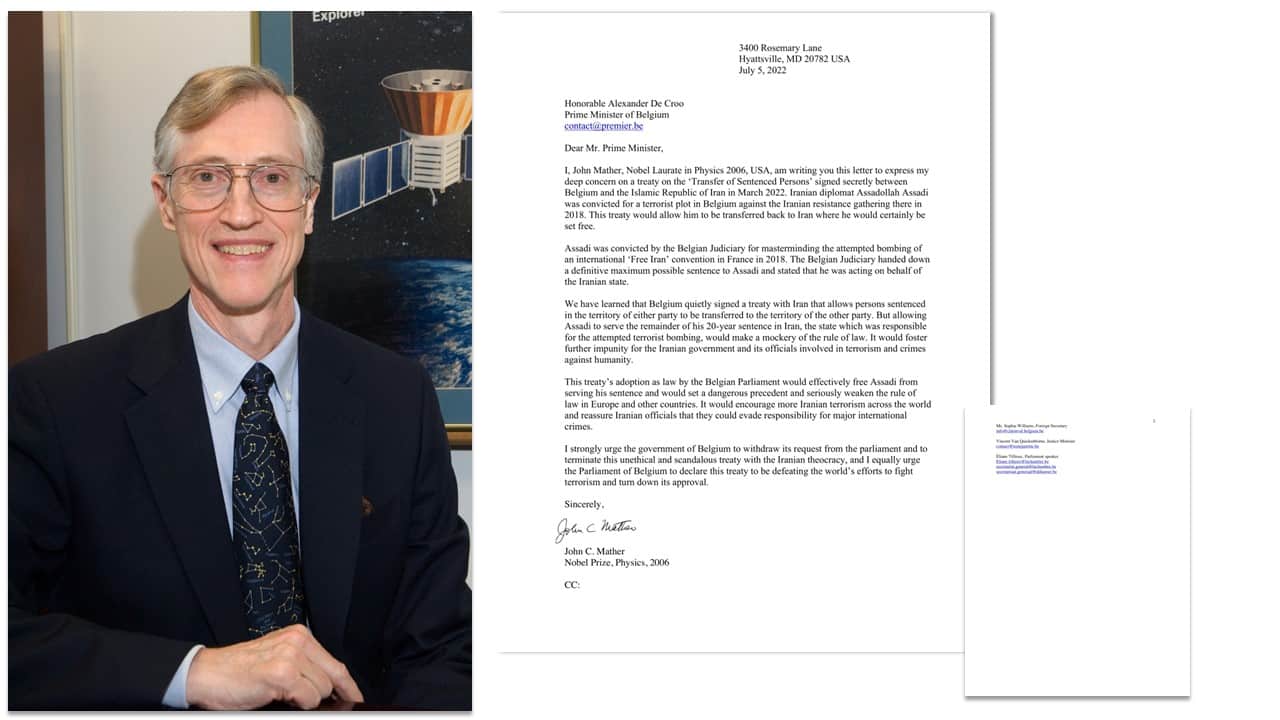 I, John Mather, Nobel Laureate in Physics 2006, USA, am writing you this letter to express my deep concern on a treaty on the ‘Transfer of Sentenced Persons’ signed secretly between Belgium and the Islamic Republic of Iran in March 2022. Iranian diplomat Assadollah Assadi was convicted for a terrorist plot in Belgium against the Iranian resistance gathering there in 2018. This treaty would allow him to be transferred back to Iran where he would certainly be set free.

Assadi was convicted by the Belgian Judiciary for masterminding the attempted bombing of an international ‘Free Iran’ convention in France in 2018. The Belgian Judiciary handed down a definitive maximum possible sentence to Assadi and stated that he was acting on behalf of the Iranian state.

We have learned that Belgium quietly signed a treaty with Iran that allows persons sentenced in the territory of either party to be transferred to the territory of the other party. But allowing Assadi to serve the remainder of his 20-year sentence in Iran, the state which was responsible for the attempted terrorist bombing would make a mockery of the rule of law. It would foster further impunity for the Iranian government and its officials involved in terrorism and crimes against humanity.

This treaty’s adoption as law by the Belgian Parliament would effectively free Assadi from serving his sentence and would set a dangerous precedent and seriously weaken the rule of law in Europe and other countries. It would encourage more Iranian terrorism across the world and reassure Iranian officials that they could evade responsibility for major international crimes.

I strongly urge the government of Belgium to withdraw its request from the parliament and to terminate this unethical and scandalous treaty with the Iranian theocracy, and I equally urge the Parliament of Belgium to declare this treaty to be defeating the world’s efforts to fight terrorism and turn down its approval.