Over 5000 Iranians to Cry for Freedom in Stockholm 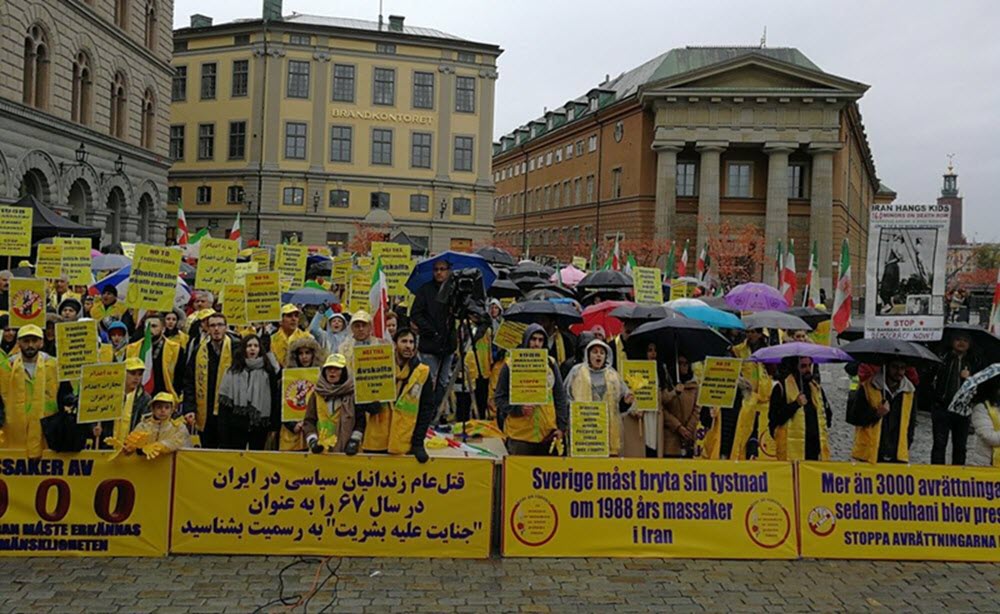 Tomorrow the issue of Iran is coming to one of the northern Europe capitals, Stockholm, through a large demonstration by Iranians who oppose the clerical regime ruling their homeland. More than 5000 are expected in this event which follows similar demonstrations of thousands of Iranians in Brussels, Washington and a large rally by more than 15000 in Berlin that reached a climax last week in a 5 days programme in Ashraf 3, home to members of the People’s Mojahedin Organization of Iran (PMOI/MEK) in Tirana, Albania, where more than 350 top politicians and personalities participated and expressed their unequivocal support for the Iranian Resistance in its struggle for regime-change and democracy in Iran.

Iranians who will be in the streets of Stockholm tomorrow will highlight a point which unfortunately has been and is being forgotten in every analysis of Iran politics and that is the fact that a war of 4 decades is being going on inside Iran between this regime and the Iranian population; a war filled with severe human rights abuses, oppression, brutalities and killings. Iranians are now determined to end the war by removing this regime and bringing a new democratic government which guarantees freedom, democracy and human rights.

Demonstrators are going to extend their voices to the northern Europe politicians that they deserve a much better government; they will say that although Iran is a rich country, majority of its population are living under poverty line because the country is being ruled by a corrupt and dictatorial regime; they will say that they seek a fundamental change which is of course their duty to bring about. However, they will make it clear that they are angry to see that Europe is trying to interfere through appeasing the clerical regime.

Iranians in their great number in this rally will call for a firm policy by Europe vis-à-vis the clerical regime and recognition of the Iranian people’s right for their just struggle for regime-change as well as for blacklisting the oppressive apparatus of the regime like the Islamic Revolutionary Guards (IRGC), and Iran’s Ministry of Intelligence (MOIS).

They also want to make a clear statement about Iran’s democratic alternative. They plan to address the politicians in northern Europe that the modern city of Ashraf 3 which has been built in less than one and half year has shocked many who formerly doubted that the Iranian main opposition would be able to build the future Iran. They are going to express their full support for the alternative, National Council of Resistance of Iran, which is well-prepared for turning their ruined homeland to a top civilized one in a short period of time.

This notion bears a special meaning and is of great importance at a time when Iran regime has turned into a real problematic issue to the world and even to its own friends and allies like in Europe who in the past tried very hard to portray it as a regime with moderate elements who can enter a dialogue. Now, as the US is in no rush as it was in the past to appease and help the clerical regime, the world can clearly witness that the Mullahs of Tehran are not capable of coming into terms with the civilized world. Thus they belong to the past and are not included in the solution for Iran.

The message which will be delivered by Iranians in their great number of over 5000 is a very important one which has to be listened and received carefully by Scandinavian politicians and media. Europe has a long delay in listening to these messages coming from the heart of the Iranian nation and it is now time to receive it before it is too late since this regime has no future in Iran and when it is gone the Iranian people will judge the European politicians for what they did.