Robert Rochefort MEP: “Yes to supporting those who want a democratic alternative in Iran” 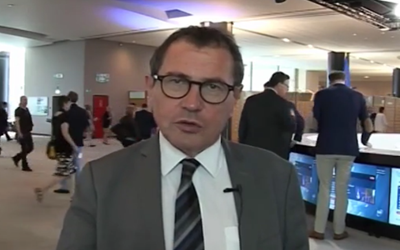 NCRI – Robert Rochefort, a Member of the European Parliament and the deputy head of the Democratic Movement Party of France, has sent a message of solidarity to the Iranian Resistance, which is hosting a major gathering in Paris on July 9th. Mr. Rochefort condemned any economic ties with the theocratic dictatorship in Iran, which has no regard for human rights.

In an interview with Simay-e Azadi (Iranian opposition satellite television, INTV), Mr. Rochefort said: “I speak to you from the European Parliament here in Strasburg. Recently, 270 MEPs have signed a statement which says we should not establish relations with the regime in power in Tehran unless the condition of respect for human rights by the regime is on the table.”

“This past year in many countries, including my country, France, we saw that many companies were seeking new contracts with the regime in Tehran, in the so-called ‘normalization’ of relations with the regime. This is something that is not acceptable for this Parliament, where we have gathered in defense of human rights and freedom.”

“In a few days on July 9 in Paris, a large number of MEPs and other parliamentarians and representatives from around the world will side with [Iranian opposition leader Mrs. Maryam] Rajavi, other officials and all those who organize this great gathering every year, in order to show their level of support for a free Iran.”

“This is what brings together both the Iranian people abroad and many other supporters. I am sure that this gathering will be a huge success and when we look at the messages of the program it’s another step to show the expanding view of those who say ‘No’ to unconditional normalization of economic and trade relations with the Tehran regime and ‘Yes’ to the defense of human rights and ‘Yes’ to supporting those who want a democratic alternative in Iran. Good luck.”

Previous articleMarian Harkin MEP supports Maryam Rajavi’s 10-point plan for Iran
Next articleDr. Nasr al-Hariri: The Gathering of Iranian Resistance in Paris on July 9 is a golden opportunity for a Free Iran