Dr. Nasr al-Hariri: The Gathering of Iranian Resistance in Paris on July 9 is a golden opportunity for a Free Iran 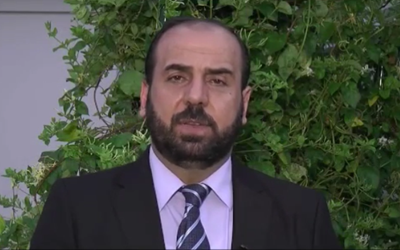 Dr. Nasr al-Hariri, a top official in the opposition Syrian National Coalition, expressed solidarity with the Iranian Resistance, which is hosting a major gathering in Paris on July 9th. Dr. Nasr al-Hariri condemned the theocratic dictatorship in Iran for its export of terrorism and in particular its complicity with the Syrian dictatorship, which has massacred many of its own people.

Mr. Hariri in an interview with Simay-e Azadi (Iran opposition satellite television, INTV) which was broadcast this week said: “The regime of Velayat-e faqih (absolute clerical rule) has paid billions of dollars to the Bashar al-Assad regime over six years. Iranian Revolutionary Guards have killed many people, and the war seems to be continuing in this direction. Subsequently, as the meaningless bloodshed in Syria continues, the Iranian people gain no benefit from this war that the Velayat-e faqih regime has taken part in. So, in my opinion, today the coordination between the Syrian Resistance and the Iranian Resistance is necessary in order to put an end to these criminal acts of the Velayat-e faqih regime. Instead of spending money for the welfare and livelihood of the Iranian people, it’s being spent for boundless plans and programs of the Velayat-e faqih regime.”

“My message to the gathering of the Iranian Resistance, which is scheduled to be held on July 9th in Paris, is that this opportunity is a golden opportunity for a national uprising against the regime. Now that the regime has entered into a war of attrition in Iraq, Syria, Lebanon, Yemen and a number of other countries, it is a good time to activate coordinated efforts among the resistances of all of these countries to cooperate with the Iranian Resistance. Moreover, it must be said that the life of this regime which kills its own people and drags them into a meaningless war is over!”

Previous articleRobert Rochefort MEP: “Yes to supporting those who want a democratic alternative in Iran”
Next articleCzech MEP Jan Zahradil in support of July 9th rally in Paris