The National: 100,000 gather to call for urgent end to ‘religious dictatorship’ in Iran

Scotland’s The National on Monday wrote:

THE crowd that gathered at Le Bourget, Paris, for the annual gathering of Iranian communities could have filled Murrayfield – twice over at an estimate of more than 100,000.

The message from the Free Iran gathering to the regime in their home country was simple – they want change and they want it sooner rather than later. This was the highlight of the year for the National Council of Resistance of Iran (NCRI), the country’s opposition in exile. 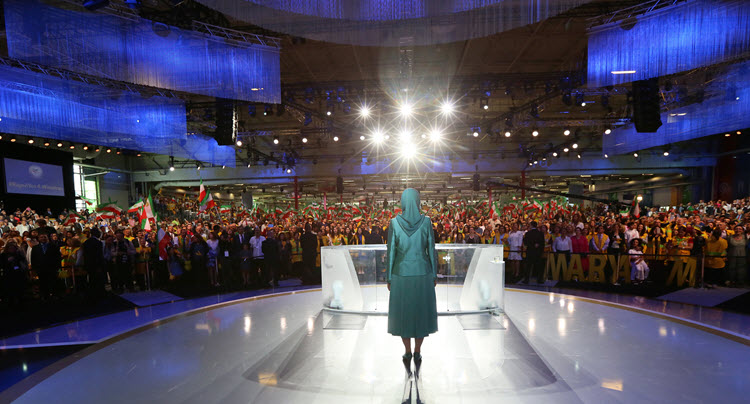 The crowd and the speakers were an eclectic mix, from the former Iranian diplomat-turned-mole who greeted me on the bus to the event, to students, parents and grandparents, politicians from across the world, from Canada, the US, Europe and the Arab nations, including a member of the Saudi royal family, appearing on the same stage as military chiefs.

With any event of this size an element of stage management is virtually inevitable, but it was the unbridled enthusiasm of the audience for more than six hours that set this apart from the standard political conference.

Then, when Ingrid Betancourt, a Colombian-French former politician who spent six years in captivity – held in the jungle by Farc, the Revolutionary Armed Forces of Colombia – introduced the story of a young girl’s weekly visits to see her father in prison, the emotion in the hall was palpable.

“This girl was eight and living in a valley in Iran when some uniformed men came to see her father one day,” she said.

“They took him away that day. It was 18 years ago and the only time she can see her father is on her weekly visits to the prison where he is still held. She waits, like many others, in a line outside the prison to see her father for 20 minutes every week.”

The conference was then shown footage of a series of messages of support from people in Iran, their faces covered, each one holding a red rose – a symbol of freedom adopted as the logo for this event.

Then came the speaker everyone had been waiting for – Maryam Rajavi, President-elect of the NCRI.

In an address frequently peppered by rapturous applause, she said that in the year since the current regime signed a nuclear agreement with world powers in order for sanctions to be eased, it had failed to find a way out of the crisis engulfing it, and had plunged into the quagmire of the Syrian war.

Repression and discrimination were rife, along with arrests, executions and the shelling of Kurdish villages.

Rajavi said the only real solution to Iran’s troubles was to overthrow the current “religious dictatorship”.

“We offer a solution that is the only effective option and the most indispensable and attainable solution: the right of the Iranian people to overthrow the religious dictatorship and attain freedom and democracy must be recognised,” she said, adding that it would also signal a breakthrough for Iran and the world.

“Many elected representatives of people throughout the world, as well as senior US, European, Australian, Canadian and Asian personalities and dignitaries – who support freedom and democracy in Iran – proudly attest to this reality.”

Rajavi added that the mullahs of Iran and Daesh were reading from the same script.

“Both espouse a similar reactionary ideology which is diametrically opposed to the pristine teachings of Islam,” she said.

“They have a similar modus operandi when it comes to barbarity and savagery. They need to rely on one another to survive.

“For this reason, so long as the regime’s occupation of Syria, Iraq and Yemen continues, we cannot confront Daesh effectively.”

Rajavi’s 10-point plan for the future of Iran calls for full democracy, equality for men and women, abolition of the death penalty and the separation of church and state.

She added: “We will not relent until the day when Iranians of all persuasions and divergences can join hands to hoist the flag of victory, the flag of a free and democratic Iran.”

The National: Iran’s regime ‘is weakened and engulfed in real crises’