Urgent Appeal to the Government of Belgium 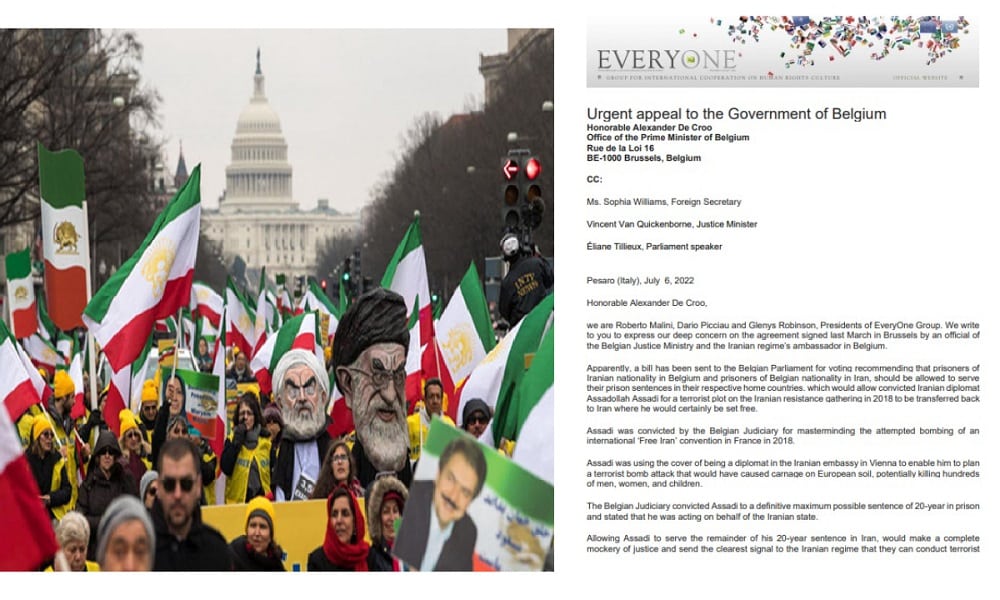 we are Roberto Malini, Dario Picciau and Glenys Robinson, Presidents of EveryOne Group. We write to you to express our deep concern on the agreement signed last March in Brussels by an official of the Belgian Justice Ministry and the Iranian regime’s ambassador in Belgium.

Apparently, a bill has been sent to the Belgian Parliament for voting recommending that prisoners of Iranian nationality in Belgium and prisoners of Belgian nationality in Iran, should be allowed to serve their prison sentences in their respective home countries. which would allow convicted Iranian diplomat Assadollah Assadi for a terrorist plot on the Iranian resistance gathering in 2018 to be transferred back to Iran where he would certainly be set free.

Assadi was convicted by the Belgian Judiciary for masterminding the attempted bombing of an international ‘Free Iran’ convention in France in 2018.

Assadi was using the cover of being a diplomat in the Iranian embassy in Vienna to enable him to plan a terrorist bomb attack that would have caused carnage on European soil, potentially killing hundreds of men, women, and children.

The Belgian Judiciary convicted Assadi to a definitive maximum possible sentence of 20-year in prison and stated that he was acting on behalf of the Iranian state.

Allowing Assadi to serve the remainder of his 20-year sentence in Iran, would make a complete mockery of justice and send the clearest signal to the Iranian regime that they can conduct terrorist attacks in Europe and around the world with impunity. Indeed, they may even be encouraged to take further European hostages to hold as bargaining chips for future prisoner exchanges.

Today many personalities, Amnesty International and Human Rights organizations have protested against the decision by your government, and an international protest campaign is going on.

As called for by the UN Special Rapporteur on Iran we must hold the Iranian regime to account for its systematic human rights abuses and terrorism.

Therefore we join all the International human Rights communities and the free world to urge you to stop this decision in respect of justice in your country and for the sake of the security of Europe. Yours sincerely, Roberto Malini, dario Picciau and Glenys Robinson – Presidents of EveryOne Group

Previous articleHRCA Appeals Against the Impunity of International Terrorism
Next articleTwenty MEPs: Reject Iran-Belgium Treaty for the Sake of Peace and Security